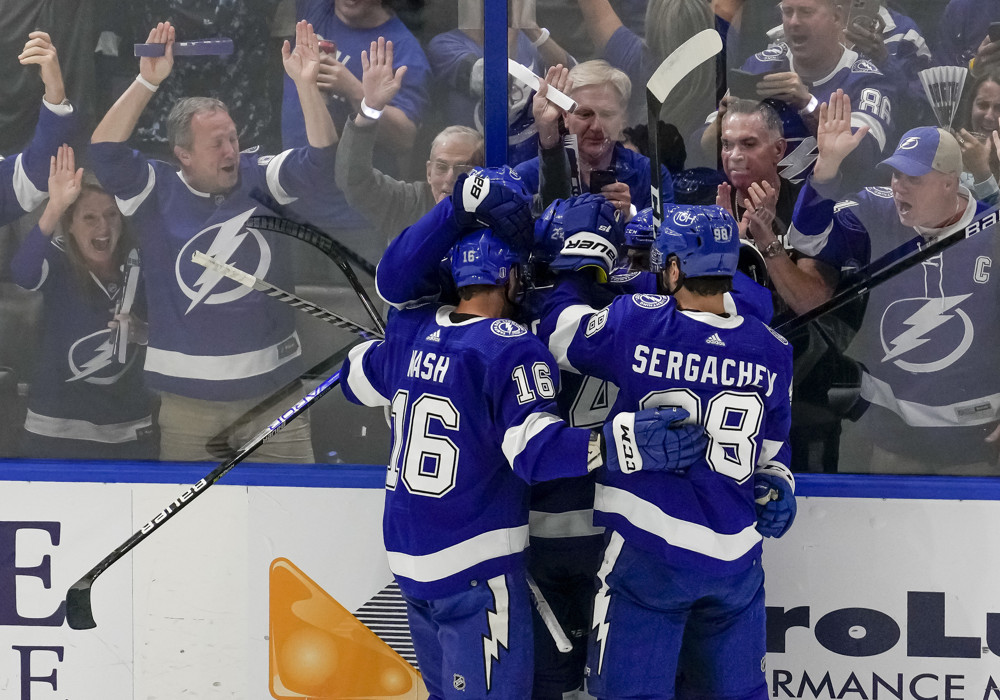 The Lightning have weathered the storm that was poured on early by the Rangers as they got off to a 2-0 series lead. Now heading into Game 6 a lot has changed as Tampa Bay leads the series 3-2 and they are heading back home to Amalie Arena in Tampa, Florida. They will look to close the Rangers out on home ice and stamp their ticket to their third straight Stanley Cup Finals appearance, where they will meet the Colorado Avalanche. The Rangers vs Lightning game 6 odds tell us they’ve got a good chance to do so.

Game 5 was a tight checking battle, where the Lightning squeaked out a 3-1 win. Both teams appeared to have a defense first mindset early on, but as the game progressed the teams tried to take advantage of their stellar transition play. Despite the back and forth action the goaltending was once again the talk of the game as two of the best in the NHL are going head-to-head in this series and for the third straight game Vasilevsky came out on top.

As we patiently await puckdrop for Game 6, which is scheduled for Saturday June 11 at 8:00 PM EST, let’s take a look at the odds that are being offered to us by BetRivers.

The game total has finished under 5.5 goals in the last 5 games of this series, but in 4 of those 5 the teams have scored exactly 5 goals. That’s why you’ll see this total heavily juiced towards the under across New York sports betting sites.

Tampa Bay has been electric in their last 8 series clinching games, which date all the way back to the Conference Finals against the New York Islanders in the 2019-2020 season, as they have only allowed 2 goals against. This doesn’t bode well for the Rangers, who look to escape elimination for the 6th time in these playoffs.

New York is definitely comfortable being down in a series at this point in the playoffs as Pittsburgh had a 3-1 series lead on them in the first round and Carolina has a 3-2 series lead in the second round. You could even say that being down in the series is familiar territory for this young Rangers team.

Andrei Vasilevskiy improved to 12-9 in series-clinching games and trails only Marc-Andre Fleury (16-21 in 37 GP) for the most series-clinching wins among all active goaltenders. #StanleyCup #NHLStats: https://t.co/4dpPfBiysa pic.twitter.com/Ne6FvARvDS

However, in this series they are facing an opponent who has proven to be able to shut teams down when they have a chance to move onto the next round. With Tampa’s experience in series clinching games and Vasilevsky’s tendency to turn into a brick wall in close out games, the Rangers will need Shesterkin to play his best hockey and more.

The back-to-back champs have the playoffs down to a science at this point. Everyone talks about the difficulty of repeating in the NHL and this was supposed to be the year that the Lightning were too tired to make a push because of all the hockey they’ve played over the past couple seasons. Well Tampa doesn’t look to be slowing down anytime soon and it starts with their superstar core.

Tampa Bay’s superstars that consist of Kucherov, Stamkos, Vasilevsky, and Hedman have been their best players in this series, which is exactly what a team needs if they want a chance at hoisting Lord Stanley. In the last 3 wins for the Lightning, Vasilevsky has only allowed 4 goals and the top line for the Lightning, which consists of Palat, Stamkos, and Kucherov have a combined 13 points, not to mention Hedman also has 3 points of his own.

This is a prime example of a team’s best players showing up in the biggest moments when their team needs them the most. And if I had to bet I would assume that this trend is going to continue into Game 6. So with that being said, I would pay close attention to that line when making any goalscorer bets for this game.

The Lightning have an average age of 29.5, while the Rangers have an average of 26.2 and with this age gap comes more playoff experience. As we all know the Lightning are the back-to-back champs and their playoff experience will prove to be very valuable in this close out game. Not only have the Lightning won the Stanley Cup two years in a row, but they have also been in the playoffs for nearly the past nine years (including this year) and of those nine seasons they have advanced to at least the Conference Finals six times.

The core for the Lightning that has received so much praise (and rightfully so) has plenty of experience and knows how to deal with the ups and downs that come with playoff hockey. We have seen this first hand as they have come back from a 0-2 series deficit to now lead 3-2 heading back home. Led by head coach Jon Cooper, who has been the coach of the team since the beginning of the 2014 season, the Lightning will be well prepared for Game 6. Because of the leadership and experience that the Lightning have throughout its lineup and even behind the bench, they are in position to strike and eliminate the Rangers.

I believe in creating value, where there isn’t any already. Because of this I am parlaying the Lightning to win moneyline and the game to be under 5.5 goals. With Vasilevsky’s record in series clinching games and Shesterkin (a Vezina trophy finalist) being in net for the Rangers I don’t see many goals being scored in this game.

It will likely be a tight defensive minded battle, where the winning team is determined by special teams. Tampa Bay has been in this position before and the Rangers are still young, which is why I believe the Lightning will be able to close out Game 6 at home and move on to the Stanley Cup Finals.

This guy doesn’t miss! Let’s get some picks on the remaining NHL games this year!