The NFL Draft is just a few days away and a lot has changed with the class since the Rams took home Super Bowl 56. In this mock we will cover at least the first pick for every team in the league, with the exception of the Rams who don’t pick until the end of round 3. That takes us to pick #42 from the Indianapolis Colts.

Is Travon Walker really going to end up as a Jaguar and 2022 first overall pick? Our friends over at Caesars certainly think so. 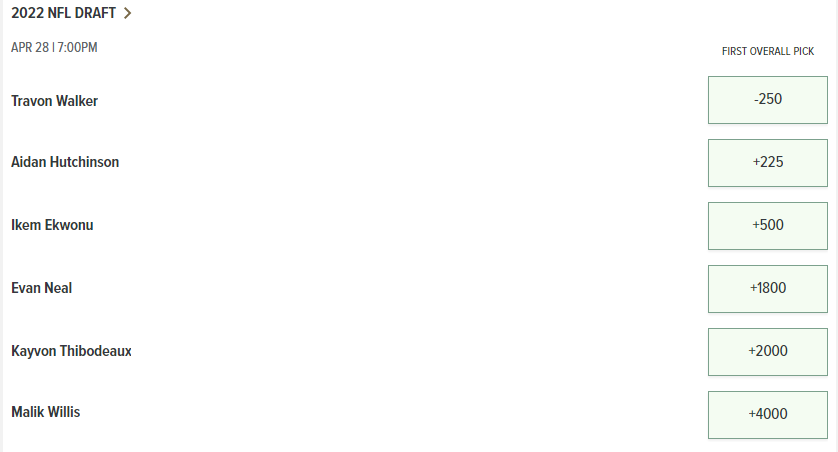 For those of you that may be unfamiliar with sports betting and odds-making, this is an implied probability of 71.4% that Travon Walker will be the 1st overall pick. So if there are any of you out there that think that implied probability is off and feel there is some value to be had, click here and go sign up for Caesars to take advantage!

But now, let’s get to the mock!

Six total sacks for perhaps one of the best defensive teams in college football history isn’t going to have Jaguars fans too excited. Walker has really ascended over the course of the pre-draft process. He tested incredibly well, putting up ridiculous numbers. He played a lot of inside technique off tackle, when the Jaguars move him outside he’ll find plenty of production.

If you think Dan Campbell is passing on this guy then you don’t know Dan Campbell. I see Hutchinson as a very safe pick, I don’t see the Lions looking back on this saying “damn, we really screwed this up”. He’s got great technique and plays with a high-motor but he’s not going to wow you with athletic traits. But for a team that needs to stock the cupboards with OKG’s (Our Kinda Guys), this is Dan Campbell’s kind of guy.

This is the pick that could go in any type of direction. The Houston Texans need absolutely every position filled on both the defensive and offensive side of the ball. They’ve got two picks in the top-13 to get the process started. I’m not going to call Kyle Hamilton Derwin James, because I don’t think he can defend as well in man coverage. But he is a unicorn that can be that ball hawk over the top or jam the middle of the field against the run. The Texans desperately need this type of player on defense.

If the Jets want to make sure that Zach Wilson is the QB of the future, they need to invest in the offensive line. Wilson was the worst quarterback in the NFL last season under pressure. This guy cannot do what Joe Burrow did in 2021. Ekwonu has the competitiveness and athletic ability to make an impact instantly and the traits are there to develop into a great pass protector.

The Giants managed to completely avoid the offensive line in last years draft. Most notably, drafting WR Kadarius Toney in the first round, who they apparently are now looking to trade. They were the third worst pass blocking o-line in football, only behind the Dolphins and Falcons. What better way to shore this up then a Nick Saban coached tackle? Don’t forget that new HC Brian Daboll worked under Saban as well. 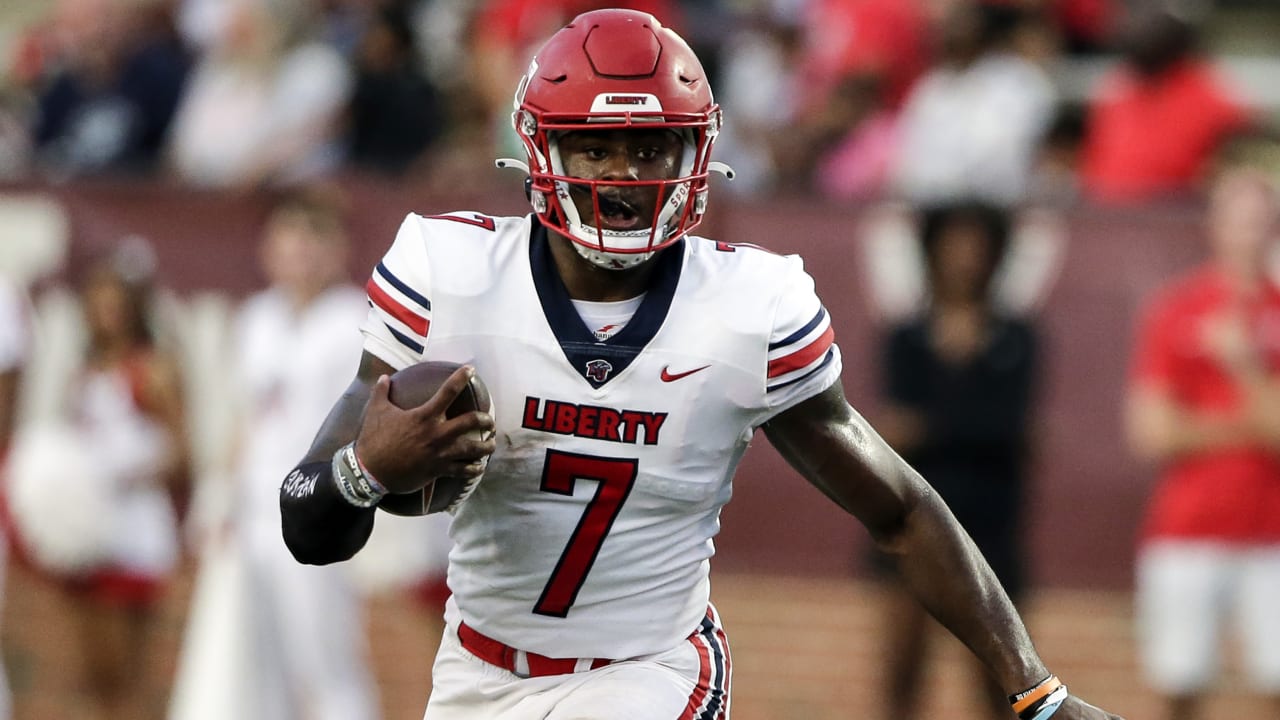 This is another one of those picks that I just can’t see going any other way. Perhaps Matt Rhule is higher on another quarterback, but there isn’t a doubt in my mind that is the position they will be selecting here. If things don’t pan out again in Carolina then this will be Rhule’s last season. The quarterback position is what is holding this team back and Willis has ridiculous arm talent that to me makes him the only QB worth this early of an investment.

If the Giants made these two selections with their picks they would automatically be the winners of this years draft in my eyes. This “character concern” bullshit that’s been growing over Thibodeaux is nothing to be concerned about. He was such a difference-maker at Oregon and has the type of first step is going to make him a double-digit sack guy. Sure he’s lean, but he’s still a 3-down player in the NFL.

The Falcons are yet another team that could go in a number of different directions with this pick. But with so many holes on the roster the best place to start is in the trenches. Johnson finished the 2021 season with 12 sacks and 18 tackles for loss, he was the only thing at Florida State that provided any type of consistency. The Falcons are in desperate need of help here after finishing with the league’s lowest sack percentage by a significant margin in 2021.

Seattle Seahawks fans, trust me, you do not want to be drafting a quarterback on day 1 or 2 of this years draft. There are two excellent prospects waiting for you in the 2023 draft. So it needs to be a best player available type of approach. Gardner had one of the best careers that a cornerback can have, not giving up a single touchdown. He’s a natural leader that has all the personality traits to make a smooth pro transition. How’s this for a first round haul Jets fans? The best offensive tackle and wide receiver prospect belong to New York. Like I said earlier, if you really want to find out what Zach Wilson is made of then give him all the tools he needs. If it doesn’t work out, then the next guy is in a prime position to make it happen. Wilson is such a smooth route runner in and out of his breaks, he and Elijah Moore will form a dynamic young duo for years to come.

The Saints traded up for this pick and it seems to me like they did it to jump the Chargers for a tackle to replace Terron Armstead, with Penning being the expected target. This leaves them with the 19th pick to address wide receiver.

Ridder seems to be generating a lot of buzz leading up to the draft. He throws the ball with great intent and a lot of zip. I didn’t see him rising this high in the pre-draft process but I think Mike Tomlin is willing to take a chance on him if Malik Willis is off the board.

I didn’t expect to mock McDuffie this far down the draft board, but every year there is one of those guys. Perhaps someone makes a trade up to get him while he’s falling. But this would be a major hit for the Chiefs at a position of clear need.

Dan Campbell is so shocked to see his #1 ranked quarterback still available at the end of the first round that he can’t resist taking him here.