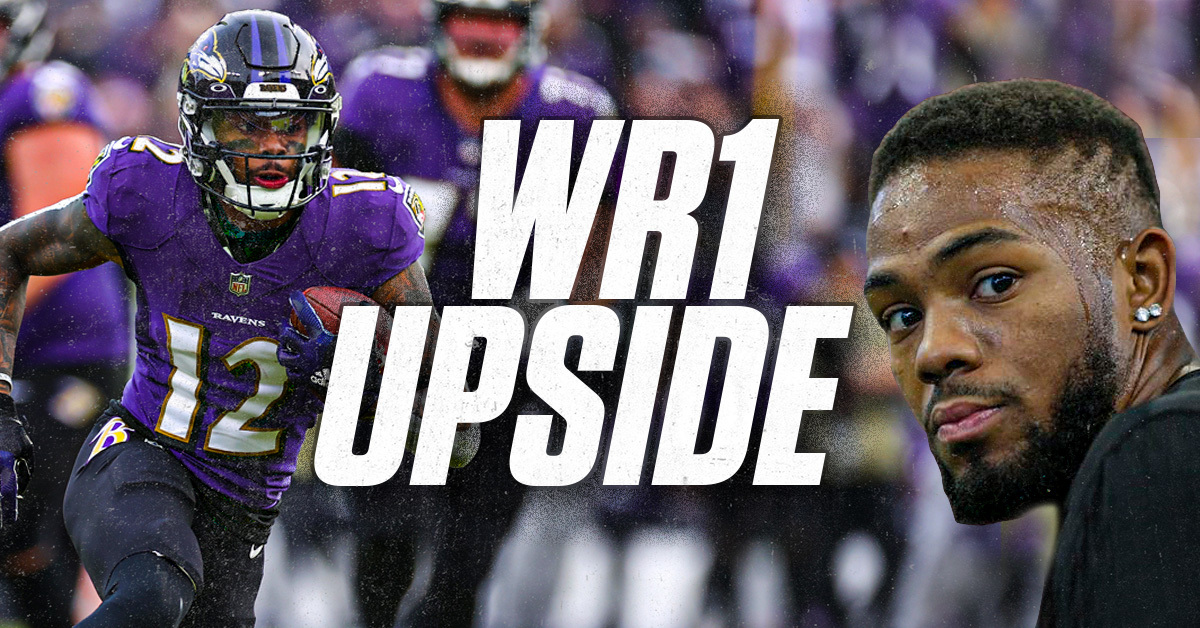 In the best fantasy football draft strategy, you take a WR outside of the first six rounds and that player outperforms his ADP to become a top-20 player at his position and a mainstay in your lineup. A prime example of this happening last season was with Ja’Marr Chase and Deebo Samuel who were drafted as the WR36 and WR38 respectively.

These two WRs made it happen by becoming the clear WR1’s in their offense while also providing a boost in the YAC game. These two players finished second and third in the NFL for yards after the catch and the only person above them was the overall WR1, Cooper Kupp. Both of these WRs also amassed over 1400 yards and 13+ TDs last season. So who are the WR4’s with WR1 upside this season?

There are some WRs currently going as WR4’s that I am ecstatic about going into next season. We have ranked them much higher in our wide receiver rankings than where they are currently going in fantasy drafts. Treylon Burks is someone I am especially excited about, but his issues in training camp forced me to leave him off this list. He has been rumored to have asthma and conditioning concerns and with Robert Woods also in that offense, I think that limits his potential to be a top-20 WR.

Let’s take a look at the wide receivers whose current ADPs are outside the top-32 at the position right now.

I will highlight two players who fit the mold of a WR4 with the upside of a WR1. Similarly to the path Ja’Marr Chase and Deebo Samuel took last season. Keep in mind that even though these receivers have sky-high upside, their fantasy finishes can be very sporadic with a potentially low floor, but the best fantasy football drafts have to include some risk, as these are the kind of players who can win you your league.

The Baltimore Ravens traded Marquise Brown to the Arizona Cardinals this offseason, opening up the WR1 role in this offense. Bateman now has the opportunity to step in and be the true No. 1 wide receiver for Lamar Jackson and the Ravens. He will see massive opportunity next season, with Marquise Brown leaving 146 targets, 91 receptions, 1008 receiving yards, and 6 TDs on the table. With Brown’s 26.7% target share departing, Bateman should be able to seize a massive role in this offense. Beyond even just Brown, Sammy Watkins and Devonta Freeman also left in the offseason which creates an additional 91 vacated targets, combine that with Brown’s vacated targets, and the Ravens have the 4th most vacated targets in the NFL going into next season.

Bateman is my favorite breakout candidate this season by far, he has the prototypical WR1 frame and athleticism to be great in the NFL, along with great route running and footwork to create separation. He didn’t have the best statistical season last year (68 targets, 46 receptions, 515 yards), but remember he did not play a snap until week 6 and didn’t receive over 70% of snaps in the offense until week 15. I would not classify Bateman as a bust proof WR, as he does not have the same floor as other WR1’s, but he does have the same upside.

Many people this offseason are underrating Bateman because they think Lamar Jackson cannot sustain him consistently in this offense. But last season Marquise Brown was actually playing like a WR1 in games both he and Lamar Jackson played in. Firstly, he had 146 targets which were 9th in the NFL and his target share of 26.7% was 11th best in the NFL. In weeks 1-13 last season before Lamar Jackson got hurt Brown was averaging 16.73 fantasy points per game which were more than the likes of CeeDee Lamb and Ja’Marr Chase. Should Bateman be able to step into Brown’s role as the WR1 and have the same success, he has all the potential in the world to finish as a Fantasy Football WR1.

Kansas City tried to sign JuJu last offseason before he ultimately chose to return to the Steelers. In 2021, JuJu was hurt for most of the season only appearing in five games. His last healthy season was in 2018 when he had 111 receptions on 166 targets for 1426 yards and seven touchdowns. He finished as the WR8 this season averaging 18.6 fantasy points per game. This shows that Smith-Schuster is someone that can and has been a WR1 in the past when he was just 22 years old. That makes it seem like he’s someone past his prime and on the comedown, but let’s not forget JuJu is just 25 years old and in the prime of his career.

I chose Smith-Schuster as someone who could finish as a fantasy WR1 because of his potential as the Chiefs and, more importantly, Patrick Mahomes WR1. The guy who has been the Chiefs WR1 for the past five seasons, Tyreek Hill has been traded to the Miami Dolphins leaving a hole in this receiving corps. JuJu is who the Chiefs hope will fill that role as the top receiver, but they also acquired WRs, Skyy Moore and Marquez Valdez-Scantling. That is scaring some people away from Juju, but Skyy Moore is just a rookie coming from the MAC conference, and MVS has been inconsistent his whole career and never had over 40 receptions in a season.

What I’m getting from camp so far…

Juju Smith-Schuster is going to have a career year. pic.twitter.com/n7XNPqkK6c

The hole Tyreek Hill is leaving in the Chief’s offense is massive as he put up 111 receptions on 159 targets for 1239 yards and nine touchdowns. There is an enormous opportunity in the Chiefs offense for the former USC Trojan, and should he cement himself as the Chiefs WR1 his potential in this top-five offense is sky-high. JuJu has the profile and all the makings of someone who could blow his ADP of WR37 completely out of the water and become a fantasy football WR1.