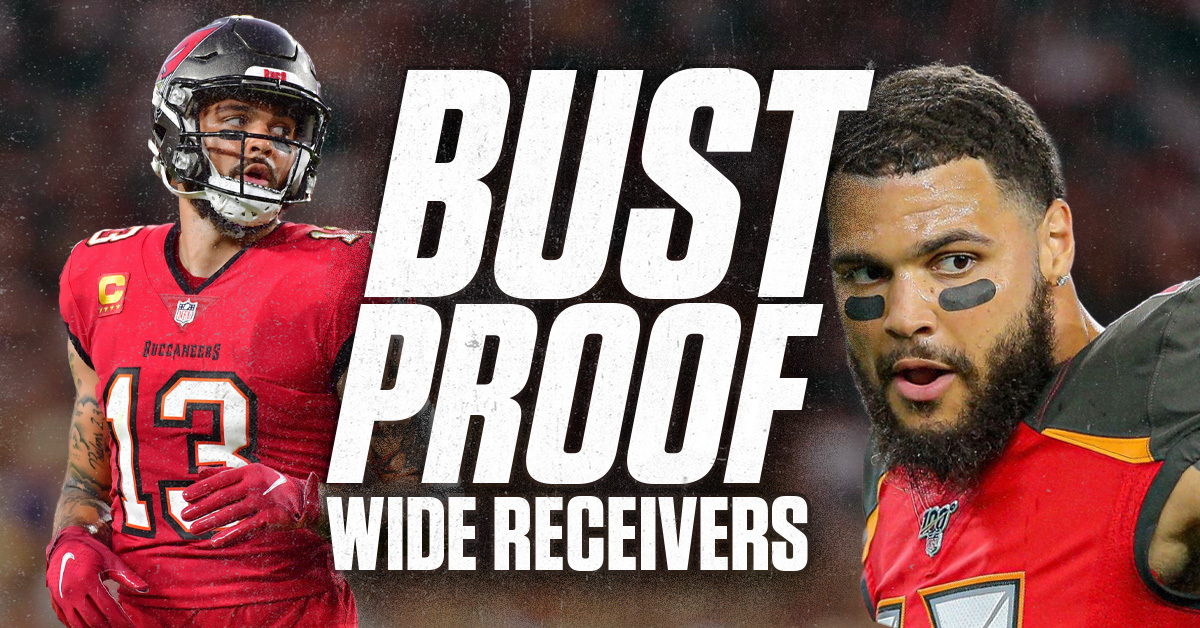 What does being a “bust proof” player mean in fantasy football? Well, first we need to define what a bust is. A bust to me generally speaking is someone who finishes 10+ spots behind his average draft position for his specific position. For example, last season Allen Robinson came into the season ranked as the WR12 and finished as the WR81 which is a -69 spot drop-off, or Kenny Golladay who was drafted as the WR27 and finished as the WR79 a -52 drop. Bust proof wide receivers are seen as not having any chance of that. These players have a high enough floor that even worst-case scenario they should provide a return on value around their ADP.

Mike Evans is one of the most consistent WRs in the NFL, as he has gone over 1000 yards in all of his eight NFL seasons. He also has 27 receiving touchdowns in the last two years and averages 9.4 touchdowns a season for his career. The Buccaneers led the NFL last season in passing attempts (731) by a wide margin, and that is not expected to change in 2022.

The Bucs No. 2 WR Chris Godwin is coming back from an ACL tear and his timetable is up in the air. Additionally, they lost Antonio Brown and Rob Gronkowski in the offseason, which leaves a lot of targets up for grabs which I think Evans will capitalize majorly on. Find where we have Mike Evans in our 2022 fantasy football wide receiver rankings here.

I think there is a very legitimate chance that Evans will lead the NFL in touchdowns this season. He is averaging 13.5 TDs in the past two seasons and with all the injuries and uncertainty in the Bucs WR room, he has a path to even more. Evans is currently being drafted as the WR10 and finished last season as the WR9. The WR10 from last season was Hunter Renfrow and he put up 1,038 yards and 9 touchdowns. So for Evans to match his ADP and provide a return on value, he would need to almost match what Renfrow did last season which should be easy with more targets and TDs guaranteed to come his way. Evans is also someone who I think has the potential to finish as the overall WR1 in fantasy football.

There’s no denying DJ Moore’s elite talent or usage for the Carolina Panthers. He was top five in target share (28.4%), air yards (1632), and air yard share (39.9%). He also ranked sixth in targets (162), and route participation (95.5%). Moore has been one of the most consistent receivers in the NFL over the past three seasons averaging 138 targets and 1175 receiving yards over that time span. He has also averaged a 24.28% target share over that time, which is top five in the NFL. Well if he’s so talented and getting the majority of the Panther’s targets why did he only finish as the WR18 last season?

That would be because of his horrendous TD rate. Over the past three seasons, he has averaged a 2.93% TD rate, and last season he had a 2.45% TD rate which was near the bottom of the NFL. To put that into further context Moore has 14 career touchdowns on 498 targets or one TD every 35.57 targets. Let’s compare that to other WRs from this past season. Cooper Kupp averaged a TD every 12 targets, Mike Evans every 8.14 targets, and Ja’Marr Chase every 9.85. That’s not fair though Kupp, Evans, and Chase were at the top of the league in TD receptions last season, so let’s compare Moore to guys who finished around where he did last season. Firstly, Tyler Lockett who finished as the WR16 averaged a TD every 13.38 targets, Amari Cooper (WR27) every 13 targets, and Adam Thielen (WR28) every 9.5 targets.

Most WRs with Moore’s usage are no-doubt top 12 fantasy options, but because of his terrible TD rate that has not been possible for him. He has had such a dreadful TD rate his entire career because of the carousel of below-average QBs that the Panthers have provided him with. What doesn’t help is seven different QBs in his last 3 seasons, and none of them have played a full season. He will now have Baker Mayfield behind center who should drastically increase his fantasy value with drastically more red zone opportunities and more downfield targets. Moore is currently going at the beginning of the fifth round in the exact spot he finished last season in as the WR18, but if can even get a league-average TD rate and QB play he has top-ten upside.

Mooney experienced a breakout season in 2021 which saw him rack up 81 receptions on 140 targets for 1088 yards and five touchdowns. That’s up from 61 receptions and 631 yards in his rookie season. Mooney did not open the 2021 season as the Bears WR1 but eventually took that title from Allen Robinson, amid his struggles last season.

Mooney will have a ton of opportunity in Chicago’s offense, as the Bear’s third, fourth, and fifth leading receivers all left the team in the offseason. The Bears did not make a huge effort to fill this gap, signing fringe starters, Byron Pringle and Equanimeous St. Brown, and drafting Velus Jones in the third round. Last season, Mooney had a 24% target rate which ranked eighth in the NFL, and in the last four weeks of the season, his 95% route participation was fifth in the NFL.

Mooney’s fantasy value is heavily dependent on two things. First, Justin Fields’ development as a passer, and the connection between Fields and Mooney. Secondly, how the Bear’s new offense will look under new offensive coordinator, Luke Getsy. Getsy has been with the Packers since 2014 and was their quarterback’s coach and passing game coordinator last season. I believe that these two things will actually go hand in hand, and Justin Fields will take a massive step forward next season in Luke Getsy’s offense. Last season Mooney finished as the WR23, and with an increased role, and improved offense he should only get better this season.

He is currently being drafted as the WR26, which is worse than his finish from last season. The WR26 from last season was Christian Kirk who did not even have 1000 receiving yards and only saw 103 targets compared to Mooney’s 140. Therefore, for Mooney to qualify as a bust-proof player and to meet his ADP he only has to have the same production he did last season, which should happen easily for the reasons explained above.