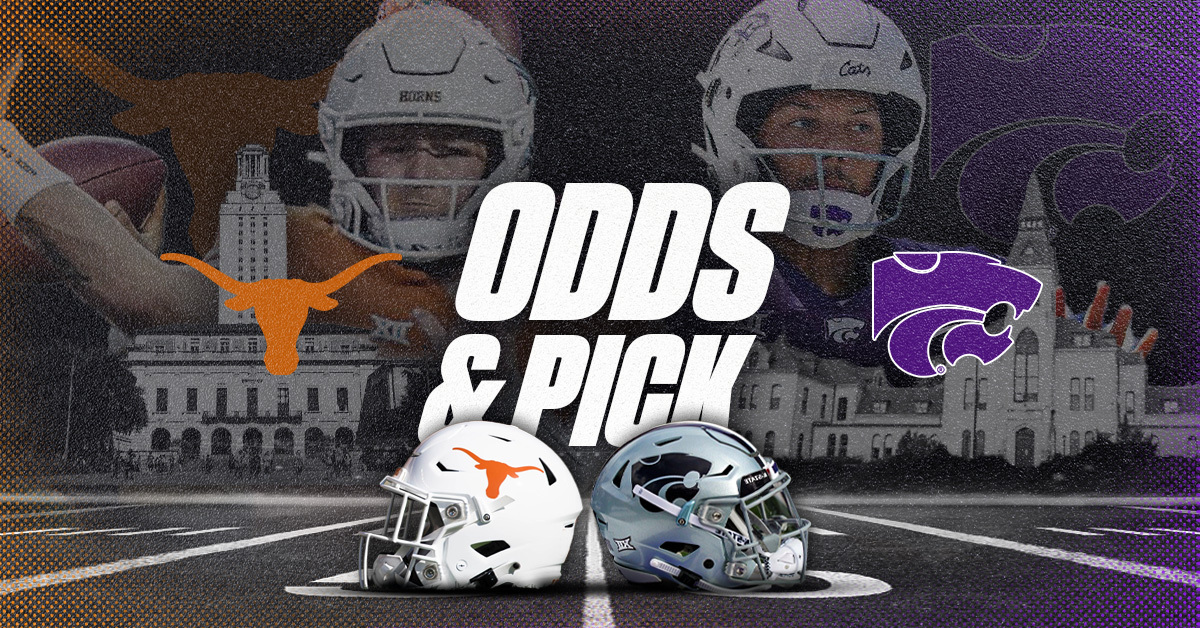 Texas enters Saturday’s matchup as short road favorites versus a Kansas State team that has shown that they can compete with anyone in the Big 12. Their sole conference loss came against a top-tier team in TCU. Both teams are ranked in the top 25 and are looking to remain in the discussion for the Big 12 Championship game. Kansas State is 4-1 at home this season and 4-1 against the spread in those games.

This Big 12 matchup takes place on Saturday, the 5th, at 7pm EST. Let’s take a look at the Texas vs Kansas State odds.

Kansas sports betting markets list the Wildcats as home underdogs. As surprising as it is to see the #13 team in the nation as underdogs, the Longhorns have been favored in all but one game this season. The point spread opened at Texas -1, so it seems as though the Kansas sportsbooks are taking some money on Texas.

Both of the Longhorns’ conference losses have come on the road this season. Losing by seven to Oklahoma State and a heartbreaking overtime loss to Texas Tech.

Coming off a bye, Texas is looking to win their first real road game of the season. The task is no small ask, they face a Kansas State team that has looked unstoppable at times this season. Coming off a 48-0 shutout win over Oklahoma State, the same team that beat Texas by 7.

Texas’ strengths on offense have come to light as the season has progressed, averaging 444 yards per game on offense in a somewhat balanced attack. Quinn Ewers has Texas fans excited for the Longhorns program once again, but he has a little bit of way to go before he joins the conversation of being one of the top quarterbacks in the nation. He has shown some serious talent in the couple of games he has played since returning from the injury he suffered against Alabama.

Even though Ewers is getting all of the attention when Texas enters a conversation, one of their biggest contributors is their running back Bijan Robinson. Averaging 115 yards per game and has 11 touchdowns on the season.

The Texas defense has also been a big highlight for the season, last year their rushing defense was severely lacking but the story this year is quite the opposite. Only allowing 121 rush yards per game on the ground. Kansas State relies heavily on their run game which will be a huge the test for the Longhorns front seven.

Kansas State enters this Big 12 matchup with their eyes set on a rematch with TCU in the Big 12 Championship game. They lost to TCU by 10 points but the game looked to be all Kansas State’s until they were held scoreless in the 2nd half.

They needed a wakeup call. Kansas State came out firing on all cylinders against Oklahoma State last week. Shutting out the Cowboys and winning 48-0. The Wildcats will look to keep the Longhorns offense under control with the help of one of the best defensive squads in the Big 12.

One question that continues to revolve around this Kansas State team relates to their starting quarterback. Adrian Martinez was the sure starter up until the TCU game but after leaving the game due to injury.

Not sure who the starting QB will be against Texas, though. It will be another game-time decision. Klein is at peace either way.

Many people like what they saw from back up Will Howard. Howard has put up two great games filling Martinez’s shoes, almost pulling off the upset over TCU and leading the offense in the win over Oklahoma State, throwing for 296 yards and 4 touchdowns.

This BIG 12 match up will be one for the ages. The Texas Longhorns have absolutely owned this matchup over the last decade. Kansas State’s last win versus Texas came in 2016 and the wait has been tough for Kansas State fans. This is their best chance in years to finally take back their bragging rights in the BIG 12.

Both of these defenses are aligned to slow down the opposing offenses and I see this being the case on Saturday. I expect a low scoring affair with the fact that both teams are actually quite bad at converting on 3rd down. If these defenses can put the offenses in long down and distances on 3rd down, it will be tough for both offenses to drive the ball down the field.

The wind is expected to be 15 mph plus on Saturday night, causing issues for deep threat passes and keeping field goals to the minimum.