Championship week is here, and LSU is looking to pull the big upset over the undefeated reigning national champions on Saturday. The #14 Tigers are 9-3 on the season (7-5 ATS), while the #1 Bulldogs are 12-0 (6-6 ATS). This game is being played at the Mercedes Benz Superdome at 4 PM EST and will be broadcasted on CBS. We’ll take a look at the LSU vs Georgia odds to see who has the upper hand.

Louisiana sports betting markets have settled in on the Dawgs as 17.5 point favorites in this one. LSU has surprised some with Brian Kelly this season and could build on a good campaign with an SEC Championship.

If you’re looking to bet on college football this weekend check out the best Louisiana sports betting promos!

LSU comes into this SEC championship game following a two score loss to the dumpster fire that was the Texas A&M Aggies. Coming into the biggest game of the season after questionably your worst performance is not what you want, but LSU will be a hungry “dog”.

Looking at the offensive numbers for this team, nothing really stands out beside it really just being the Jayden Daniels show. The extremely talented QB leads the Tigers in both passing yards, and rushing yards. Daniels has 26 total touchdowns, and is the lifeline of this team even with the NFL talent of Kayshon Boutte. Daniels is really good at not turning the ball over as they have the lowest INT % in the country, with the 6th highest completion %. They run the ball for 4.8 yards/rush which is 35th best in the country.

💪 @LSUfootball has been dominate in the SEC Championship game 🏆

Will they come out on top this weekend against Georgia? 👀 pic.twitter.com/kLBrNC0mkR

Again this defensive unit doesn’t jump off the charts. They’re a top 30 unit in opponents points/game and are 16th best in opponents completion percentage and that is about the most to write home about. They give up 7.1 yards/pass and 3.9 yards/rush which isn’t bad, but will need to play the game of their lives to win on Saturday.

The Georgia Bulldogs come off a national championship and have been even more dominant. A top 10 offense in the country, which many think is boring but is truly the opposite, and the number 1 ranked defense in the country is very impressive.

Stetson Bennett has this team rolling with 489.9 Yards/Game and the best RedZone Scoring % in the nation. Although the passing numbers don’t jump out at you, the ability to run the ball effectively has them set up to do whatever they please. Kenny McIntosh and Daijun Edwards allow this team to have the 3rd best yards/rush and 14th most rush yards/game while running it just inside the top 60 in the nation. Bennett is helped out by Brock Bowers and Ladd McConkey who both are tied for the team lead in receptions.

Running the ball is not the way to beat this Bulldogs defense. They rank 6th in Opp Yards/Rush and 2nd in OPP Rush Yards/Game at only 85.0 while being run on the 3rd least in the country. It’s interesting that the pass defense hasn’t been able to sack the quarterback much, or have had many interceptions, but give up under 200 yards through the air, and the 5th least Yards/Pass. There is talent all over the field for this Georgia team, and expect it to be on full display Saturday. 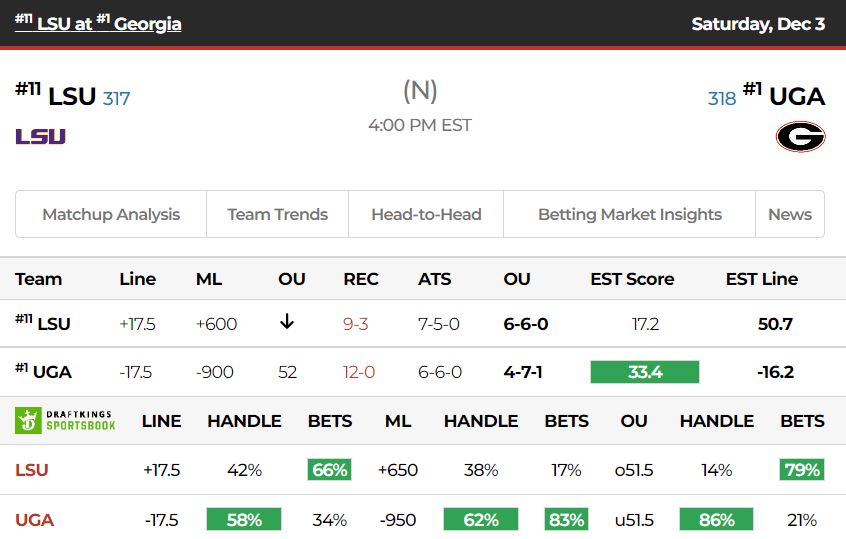 LOOK AT ALL THE SHARP MONEY ON THIS UNDER. In their 3 losses this season, LSU averages 19.7 points per game, and those 3 losses haven’t come against defenses that aren’t even close to the same level as the Georgia Bulldogs. It will be a dog fight for the Tigers on Saturday, and although I like UGA to cover the points my play of the game is going on the Under 51.5.