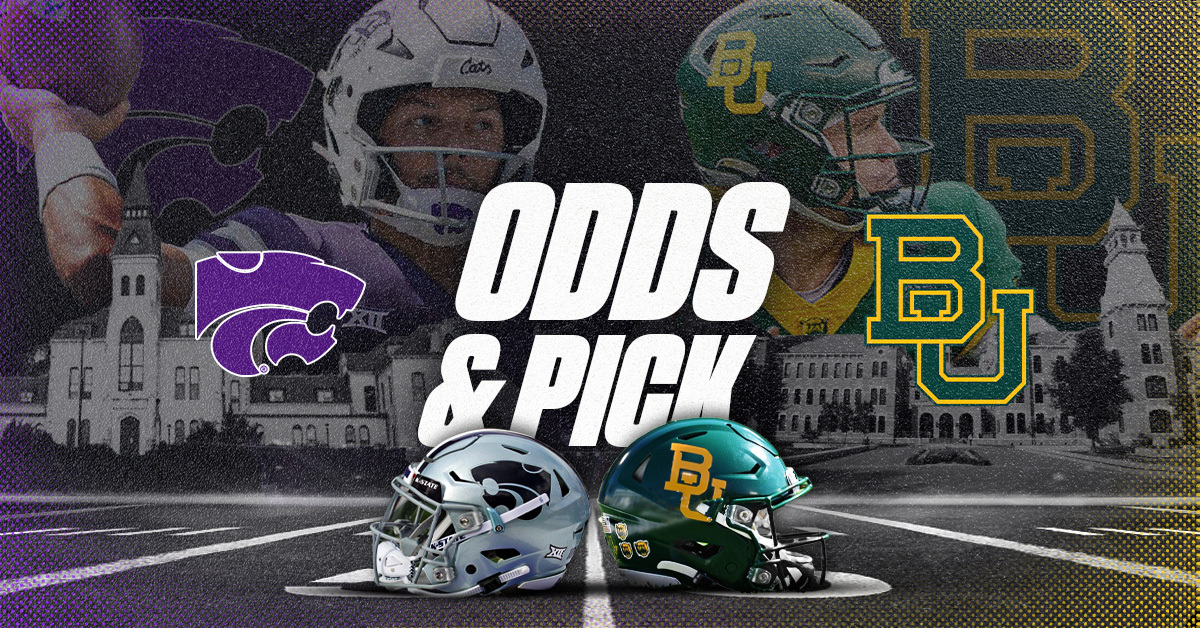 The BIG12 has been one of, if not the best conference in college football this season. The two teams at the bottom are still capable of becoming bowl eligible. That’s also led to what will be an entertaining finish to the regular season as the BIG12 Championship finalists are still up for grabs. The Kansas State vs Baylor odds and outcome will go a long way in determining who will play for the conference title.

TCU is the leader in the clubhouse, with a perfect 6-0 conference record. But there are three other teams, not named Kansas State or Baylor, with a legitimate shot at the second spot. Those include Texas. Oklahoma State and Kansas. The winner of this matchup will elevate their chances significantly as Texas hosts TCU in week 10 as well.

Despite being ranked #19 in the country in the latest College Football Playoff Rankings, Kansas sports betting markets make the Wildcats underdogs on the road in Waco, TX. That could have to do with the fact that the Bears are 3-1 against the spread at McLane Stadium this season.

Caesars Sportsbook Kansas opened this spread at Baylor -3.5 on Sunday, November 6. With the number having come down through the key number, those looking to back the Wildcats could do so on the moneyline for a plus money payout!

Will K-State Go to Will Howard?

After falling to Texas in week 9, many were suprised to see the Wildcats sticking with Adrian Martinez at quarterback. Head coach Chris Klieman has made it known that backup Will Howard, who was excellent vs Oklahoma State, knows the plan. That plan is believed to be keeping Howard from playing more than 4 games this season, as they want to reserve his redshirt.

With Martinez entrenched as the starter for the rest of the season, the run game is going to be the focus. Kansas State is running the ball on 58% of plays, which is a top-25 rate in the country. They’ve been an explosive offense on the ground this season, averaging 5.5 yards per carry. Deuce Vaughn is 8th amongst college football running backs in breakaway run percentage.

Deuce Vaughn gives it right back 💨@KStateFB ties it up! 💪 pic.twitter.com/cak1ztwt39

Much like Baylor, the Wildcats will be focused on stopping the run as well. Last week, Bijan Robinson put a world of hurt on this defense as Texas ran for 270 yards. They have not been tackling well on the second level, ranking 129th in opponent broken tackle rate. They need to do a better job winning at the line of scrimmage, they rank 78th in stuff rate this season.

The Bears run the ball at a similar rate to the Wildcats, 58.7% of plays to be exact. They’ve quietly been one of the most productive rushing offenses in the country, They’ve had a “ride the hot hand” approach, with Craig Williams exploding for 192 yards against Oklahoma and Richard Reese posting 148 yards on 26 carries against Texas Tech the week prior.

The rushing offense is 28th in EPA/rush and is inside the top-20 in stuff rate. But with Blake Shapen at quarterback they’re still a capable passing offense, but they haven’t had a wide receiver emerge as the go-to-guy. Shapen is completely 66.8% of his passes while dealing with a wide receiver group that has one of the highest drop percentages in college football.

They haven’t been the most efficient rushing defense on a down-to-down basis, but they’ve been able to limit big plays. They rank 97th in stuff rate but 9th in BOOM% (The percentage of rushes that resulted in an EPA of at least 1). Opponents have to earn their points and drive the distance of the field, but they’ve struggled to get off the field, allowing a 46.4% third down conversion rate.

These are two very similar football teams, that’s why the Kansas sports betting markets have this as such a short spread. They both play at a slow pace and focus on running the football. They also have very good pass defenses, so I don’t expect either team to put the ball in the air more than 25 times in this game.

Baylor is the side I lean towards, but I’m going to look at the total in this one. The Bears are 90th in seconds per play, the Wildcats are 102nd, and both of these teams have been very good against the pass. I think the ground attack will force this clock to move along and limit the amount of scoring opportunities for both sides.