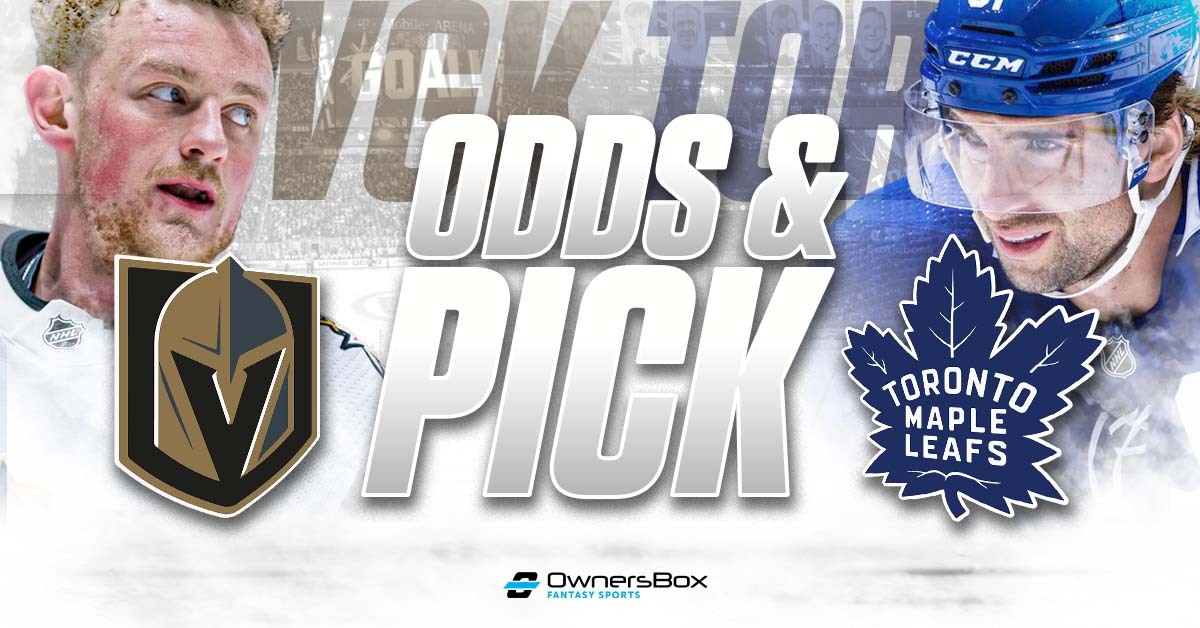 Tuesday is another day packed with hockey, headlined by the league-leading Vegas Golden Knights heading to Canada to face off against the Toronto Maple Leafs. Puck drop is set for 7 PM EST on November 8, 2022. Vegas are short road underdogs in the Golden Knights vs Leafs odds.

Matthews and the Leafs are slowly starting to string some wins together, while Eichel and the Golden Knights are hoping to completely solidify themselves as a Stanley Cup favorite.

Let’s take a look at how the DraftKings Sportsbook is evaluating Golden Knights vs Leafs odds to get a better breakdown for our best NHL betting pick.

Odds as of November 7th at DraftKings

Ontario sports betting apps list their hometown team to win by 2 or more at +190 in the Golden Knights vs Leafs odds on Tuesday night.

They are coming off a 6-4 win against Montreal and are currently riding a seven-game win streak, so it’s surprising to see them not favored in the Golden Knights vs Leafs odds.

JACK EICHEL PUT THE TEAM ON HIS BACK IN THE FINAL SECONDS OF OT pic.twitter.com/8h5KPiATwv

While the Golden Knights have a top 12 offense (goals per game) this year their defense has been the best in the NHL only allowing 1.92 goals per game. This is driven by their goaltending as Logan Thompson is emerging as one of the best young goalies in the NHL and an early Vezina trophy favorite, posting a 2.01 GAA and a .934 SV% after eight games.

The combination of a strong offense and an amazing defense possessed by Vegas promotes a system that is very favorable when betting against the spread (ATS). And this has been evident as thus far the Golden Knights are 8-5 ATS and they are 5-2 ATS when they play on the road.

The Toronto Maple Leafs are finally starting to find some success after a rocky start to the season. They are currently on a three game win streak and have beat Carolina and Boston who are two of the best teams in the NHL right now.

Much of this recent success is due to strong defense and goaltending combined with the star offensive players producing. During this win streak the Leafs have only allowed 4 goals against, while they have scored 10, with most of those goals coming from Tavares and Matthews.

It’s important to note that Toronto hasn’t had much secondary scoring all year, relying on their top two lines to drive the offense every game. Therefore, if the star players aren’t producing the Leafs will likely struggle to win because they can’t score. And as previously mentioned this win streak has been driven offensively by their superstar forwards.

The Leafs are currently burdened by injuries as both Murray and Samsonov are sidelined with injuries. This has resulted in Kallgren becoming the temporary starter, and in the four games he’s started in he is 1-1-2 with a 2.76 GAA and .904 SV%, which is respectable for a third string goalie.

But with both their two starting goalies out for the foreseeable future Toronto will need their stars to continue scoring in bunches.

It’s hard to ignore Vegas’ record ATS this season, and not to mention the Golden Knights have already covered the spread once against the Leafs this year as they beat them 3-1 at home. The goaltending mismatch gives Vegas a massive advantage, and with the stout offense that the Golden Knights possess it’s hard to imagine a scenario where they lose this game and if they do I can’t see it being by more than one goal.

Vegas has been strong on the road this season and while Toronto has been a good home team, the defense of Vegas should be able to keep the Leafs offensive weapons in check.

This all points to Vegas being able to cover the +1.5 spread as I believe there is a high chance that they push their win streak to 8 games, but if they do lose to the Leafs it will likely be a close game.