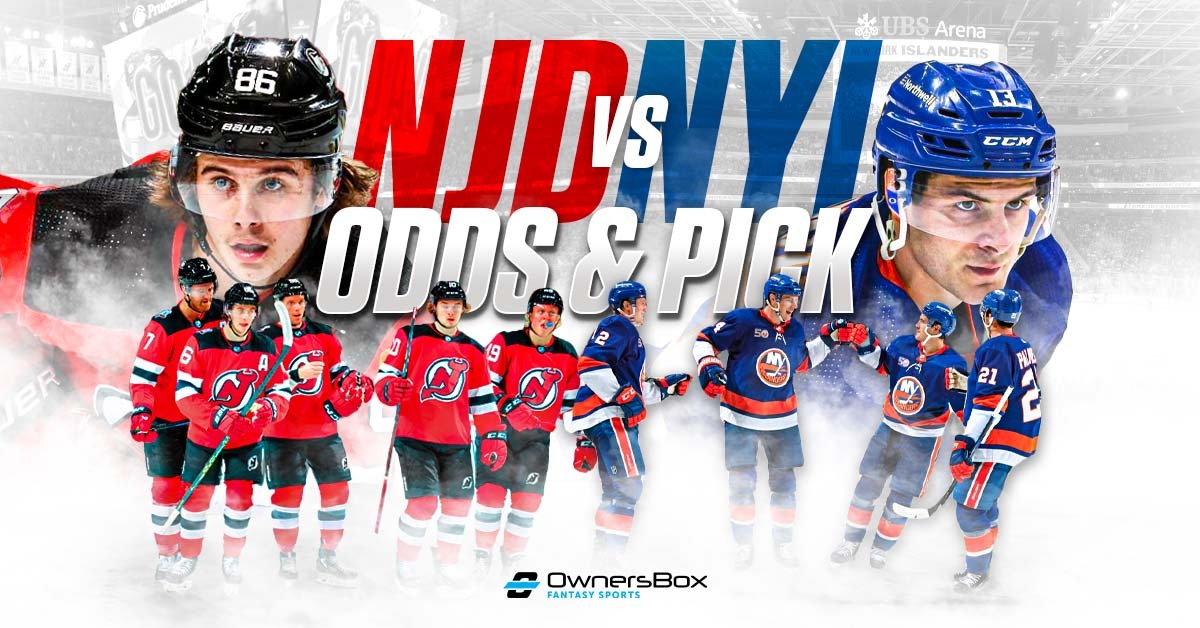 Thursday night in the NHL features a battle of close foes. The New Jersey Devils (1-2-0) head to UBS Arena to take on the New York Islanders (2-1-0) on October 20th, 2022. Puck drop is set for 7 PM EST as the home team has won four out of the last five meetings. New York sports betting apps list the hometown teams as favorites in the Devils vs Islanders odds.

Can Jack Hughes and this young team figure it out for more than one game? Let’s take a look at the NHL odds for this heated rivalry.

Odds as of October 19 at BetMGM bonus code

New Jersey sports betting markets list the Devils at -225 on the puckline in the Thursday NHL odds.

New users who sign-up with the BetMGM bonus code ‘OWNERSBOX‘ can get a risk-free bet of up to $1,000 for Devils vs Islanders.

The New Jersey Devils are underdogs because of their 1-2 record, however, this team has not played like a 1-2 team. Looking deeper into analytics, this team could easily be 3-0 if it were some better puck luck.

The New Jersey Devils are still just a goalie away pic.twitter.com/TAPWjiujsr

When looking at actual offensive numbers, they’re averaging just 2.7 goals per game through three games which is 24th in the league. So, it can be misleading, but that’s why we see New York as the favorite in the Devils vs Islanders odds.

I expect Blackwood to start but expect some positive regression from both of these goalies moving forward.

This Islanders team, I truly can’t place yet. However, I really don’t see them having a successful season after losing Barry Trotz and replacing him with Lane Lambert. Nothing against Lambert, but Trotz has been one of the most successful coaches over the last 10 seasons so it’s a massive adjustment.

They also have just looked bland. They’re 2-1 beating the Sharks, who SUCK out loud, and the Ducks, who also SUCK out loud. This team has elite goaltending, but neither the goalies or team has been tested.

Sorokin is 1-1 after taking their lone loss to Florida. But he performed really well against Anaheim, and boasts a 2.3 Goals Saved Above Expected rate.

#Isles netminder Ilya Sorokin has stopped 48 of 51 on the young season.

The Islanders have yet to be tested on the defensive end either, and I think their numbers are incredibly fraudulent. The Islanders are only allowing 2.0 goals per game, which is fifth in the NHL. But look deeper. Their Expected Goals Against per 60 is 29th in the NHL at 3.13.

This team has been fortunate to not play offensive imposing teams. They definitely have the goaltending edge, but the oddsmakers have the wrong favorite in the Devils vs Islanders odds.

Every NHL betting trend you can find for this Devils vs Islanders game will point towards taking New York in this Metropolitan Division. Let’s take a look at a few:

You read those, and you say holy shit Islanders are a lock! WRONG. I’m taking New Jersey ML and -1.5 in the Devils vs Islanders odds. The only edge I can see for the Islanders is goaltending, but in Blackwood’s last start against NYI he posted a 42-save shutout, and Vanecek has a .924 SV% in eight career games.

I’m trusting that this Devils team will breakout as the numbers suggest and betting against this Islanders that hasn’t seen a competitive offense in a week. Roll with the underdog on Thursday night.