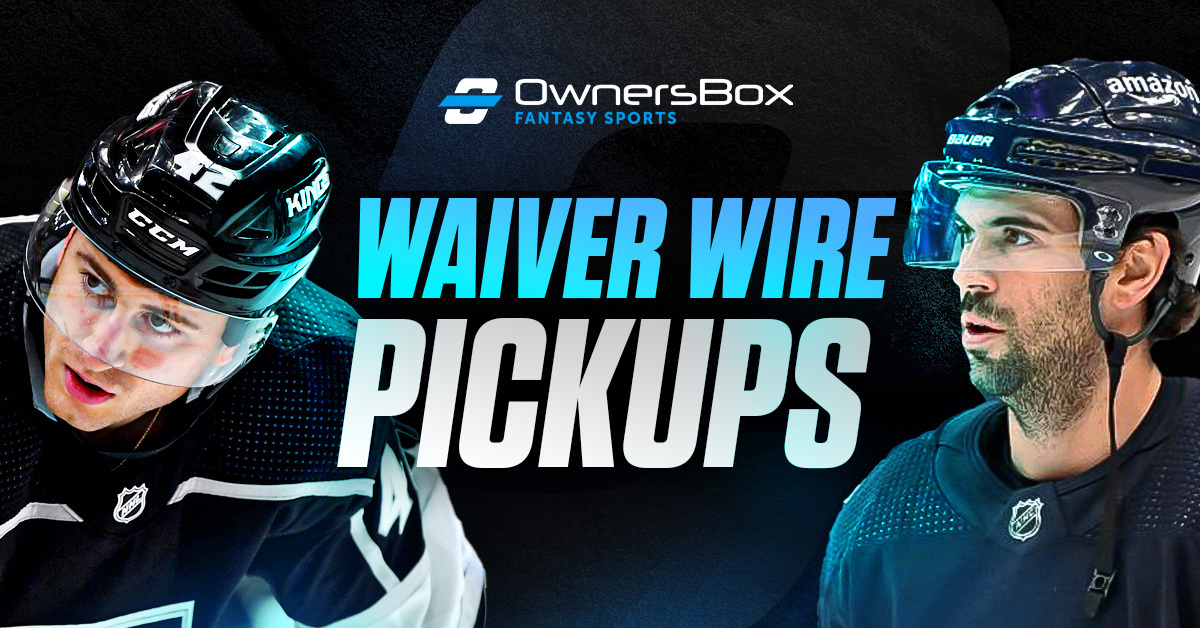 It might be too early for fantasy managers to panic, but you might also be scouring the free agent list looking for a boost after a disappointing first week of the season. The Fantasy Hockey waiver wire can be a dead zone, but we find some players to add this week.

Here are my three widely available fantasy hockey waiver wire pickups players to consider, including a forward, a defenseman, and a goalie.

Stats as of October 19th

Be sure to try out the latest OwnersBox fantasy sports game Lightning Lineups! Spin, pick, and win on NHL fantasy hockey everyday and get a $500 deposit match bonus when you sign-up!

NOTE TORONTO FANS – This is the only DFS Ontario game available. Not to mention, this is one of the best fantasy sports promos available.

The expansion Seattle Kraken roster wasn’t exactly a goldmine for fantasy hockey managers last season, and few are laying down Stanley Cup futures on this squad in its second season.

Dave Hakstol’s club went 1-2-1 to begin the season, with a newcomer on defense helping propel Seattle to a top-five power play early on.

That would be Justin Schultz, who signed a two-year, $6-million contract this past offseason.

Justin Schultz stood out amidst a disappointing team effort yesterday vs Vegas. A few fine defensive plays and generated some great scoring chances (including his goal). He led Kraken defensemen in xGF% and was the only Kraken skater with a positive plus-minus (+1)#SeaKraken pic.twitter.com/H2xDjA5AfJ

In his first four games with his new club, Schultz recorded a goal and two assists. His two helpers came on the man advantage, and he’s been averaging 3:49 of ice time on the power play.

He might not fill up the stat sheet when it comes to hits and blocks, but the offensive production could stick around, especially if he keeps averaging a couple shots a game.

Remember: Schultz hit a career-high 51 points for the Pittsburgh Penguins in 2016-2017. He won’t likely match that, but 40 points in this role isn’t out of the question, especially with some new weapons up front for the Kraken.

The Toronto Maple Leafs are likely to win a lot of hockey games this season, according to oddsmakers, despite some serious questions in net.

General manager Kyle Dubas was banking on a combination of Matt Murray and Ilya Samsonov in net, but an early season injury to the former prompted the recall of Erik Kallgren, a seventh-round pick of the Arizona Coyotes in 2015.

Keefe on starting Kallgren: "We're going to need him, so we have to get him in. We also have to be mindful of Samsonov's workload. Today would have been his third game in five nights. He's going to be busy." #Leafs

Interestingly, Kallgren got the call for Monday’s start against those lowly Coyotes. He took the loss in a game in which Toronto may have deserved a better fate, and he certainly got no support from the team’s star players.

No one’s saying Kallgren is a Vezina Trophy candidate, but with Murray out for a while and Samsonov not necessarily a sure thing, Kallgren is in line to get some starts over the new few weeks.

If you need some wins and your goalie options are light, he’s worth a look at least until Murray’s able to return or Dubas starts making calls in an attempt to improve at this valuable position prior to the trade deadline.

The Los Angeles Kings have one of the deepest prospect pools in the NHL, and some of those guys are finally starting to pop.

Case in point: Gabriel Vilardi was drafted 11th overall in 2017, but wasn’t quite able to crack the NHL lineup last season despite averaging almost a point per game for the AHL’s Ontario Reign.

Currently playing on a line with Alex Iafallo and fellow talented youngster Quinton Byfield (who should be owned in all dynasty leagues, by the way), Vilardi has recorded three goals and two assists in four games so far for the Kings.

Despite the third line assignment at 5-on-5, Vilardi is on the team’s top powerplay unit with the likes of Drew Doughty, Anze Kopitar, Adrian Kempe, and Kevin Fiala. If that keeps up, Vilardi will be a breakout candidate this season and will make a lot of people regret not jumping on him sooner.