Two Big Ten foes meet in Week 7 after a combined 11-0 start to the season. The #10 Penn State Nittany Lions travel to Michigan Stadium to take on the #4 Michigan Wolverines. The game will take place in Ann Arbor, Michigan on Saturday, October 15th at 12:00 PM EST on Fox. The visiting, Nittany Lions are 7-point underdogs in the Penn State vs Michigan odds.

Besides a Week 1 35-31 win at Purdue and a Week 3 41-12 win at Auburn, Penn State has done what they have needed to do to find a way to win, even if it’s an ugly 10 point win at Northwestern. But they come into the Big House playing much better football on the road in hostile environments. The Wolverines ran through a pretty easy non conference schedule, and have dealt with their Big Ten opponents leading up to some of to their biggest games of the season. Let’s take a look at the Penn State vs Michigan odds at DraftKings Sportsbook and see where we can get some value.

Michigan sports betting markets have locked in this point spread at the key number of 7 at the time of writing. But this number did open at 7.5 and at some of the best Michigan sports betting apps even made this number 6.5 briefly. The game total opened at 50.5 and reached as high as 52.5 earlier in the week before returning at the original number.

Michigan sports bettors can sign-up and DraftKings Sportsbook this season, place a $5 bet in the NFL, and receive $200 in free-bets by clicking the banner below!

Michigan and Penn State have played each other only 25 times dating all the way back to 1993. Michigan holds the advantage in all time games with a record of 15-10, and were the winners of their meeting last year, 21-17.

The last time @PennStateFball beat a top-5 team on the road? Coming off a bye week on October 15, 1994 against Michigan.

The Penn State offense has been solid to start this season, they rank 23rd in the country in points/game at 34.4, 24th in yards/game at 443.6 but have a disappointing 33.85% 3rd down conversion rate. Through the air, they are only throwing the ball 46.87% of the time for 7.6 yards/pass. They are solid on the ground, running the ball for 4.9 yards per rush.

Not one defense in the country is run on less than this Penn State unit. At only 36.3%, they are only being run on 27 times a game to the 5th least amount of yards/game at 82.2. This unit also gives up the 3rd lowest completion percentage in the nation (49.33%) and only 5.8 yards per pass. This Penn State unit is great, but are going up against their toughest test yet.

This Michigan team is incredibly balanced on both sides of the ball. They score the 5th most points per game in the country and allow the 4th least points per game on defense. The Wolverines are running the ball 59% of the time for 5.4 yards per rush and 212 yards/game. The Wolverines have the best completion percentage in all of college football at 74% but are only throwing the ball 27 times a game. They dominate the line of scrimmage and run the ball so much that opponents need to stack the box to stop them, allowing for them to pass at such a high percentage and so effectively.

Running against the Michigan defense has been incredibly tough. They are ranked 5th in yards/rush allowed at 2.6 and are only giving up 81.7 yards/game on the ground which is good for 4th best in the country. This defense is only giving up 5.1 yards/pass (2nd in the country) and only 166 yards per game through the air. 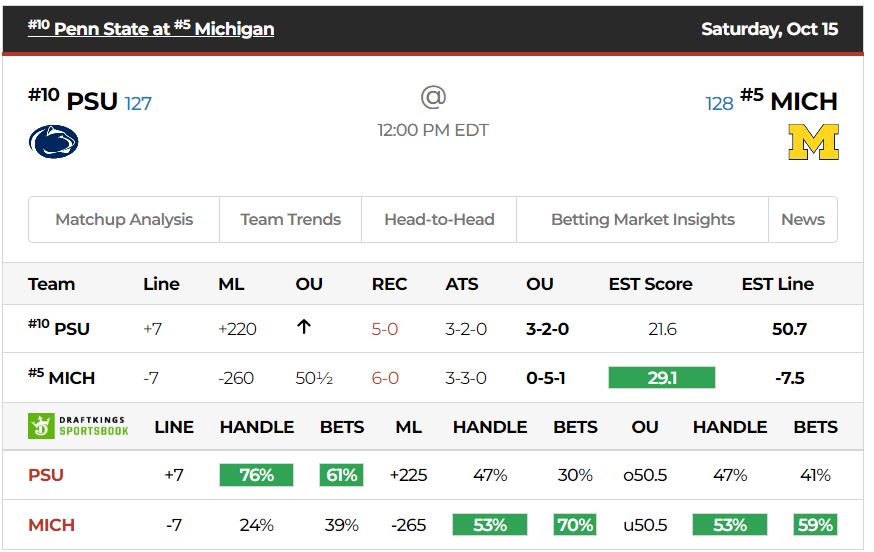 Looking at the lines from VSIN, you can see that the sharp money has come in on Penn State and the under. Based on all the defensive stats presented to you on these defenses there is no way the public would be on this over, but I think there will have to be a bunch of points late, when the game is forcing the teams to play fast. I think Penn State is the right side in this game. They have played the much tougher opponents and shown up big every time they were on the road, and it will be no different on Saturday.