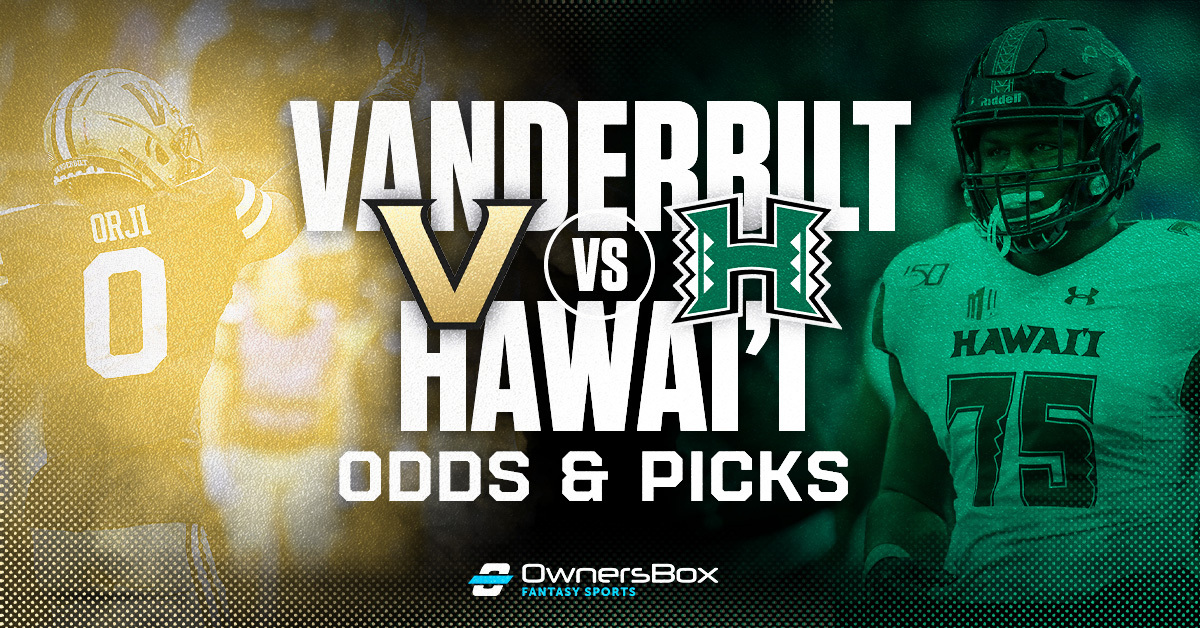 The 2022 college football season will unofficially start this weekend, the CFB slate isn’t the most appetizing but that doesn’t mean it isn’t watchable. There should be some competitive games, but not only that, betting value on the board. Hawaii and Vanderbilt will close out week 0 on the island at 10:30pm EST on Saturday, August 28, 2022. The Vanderbilt vs Hawaii odds favor the Commodores on the road.

These two teams had very different finishes in 2021, but they seem to be going in very different directions for the 2022 season. The Rainbow Warriors finished last season 6-7, qualifying for a bowl game, but fired head coach Todd Graham after player outrage over his program’s culture. Vanderbilt continued to finish in the SEC basement, with a 2-10 overall record, but things are looking up for year 2 under Clark Lea.

Tennessee sports betting sites list the Commodores at a few different spreads, sports bettors should be shopping around for the best number. This line has moved significantly over the past few days, earlier this month Vanderbilt was favored by just 6.0 points. This is a significant line movement considering the key numbers of 6 and 7 in college football betting.

It cannot be underestimated how much focus should be paid to Hawaii’s roster turnover. This team returns just 33% of it’s production on offense and defense for the 2022 season, only Nevada is returning less. This was the result of Todd Graham’s brief stint on the island, now the program will be welcoming 53 (FIFTY THREE!) new players to it’s roster, including 27 transfers.

Timmy Chang, former Hawaii superstar quarterback, is now the head coach as they look to revive the culture at the program. Bringing in a player with roots to the program makes sense, but he’s never even been more than a wide receivers coach at the FBS level. So there is little proof he can build out a roster that can compete amongst the country’s best.

Game week is officially here! @CoachTimmyChang and others provide insight on what to expect from Week 0 opponent Vanderbilt! Don't forget to wear your 🟢🟢 on Saturday! #BRADDAHHOOD pic.twitter.com/Q3ie1vB97f

Chang comes from working under Jay Norvell at Nevada, I’d expect this team to throw the ball plenty in a run-and-shoot style offense. The problem is that they lost Chevan Cordeiro at QB and new starter Brayden Schager has no returning production at wide receiver to throw to.

With the Hawaii program searching for it’s identity this could be a great opportunity for Clark Lea’s program to capitalize. Vanderbilt ranks 52nd in returning production, with 70% on offense and 67% on defense. Mike Wright will likely be in at QB, his dual threat ability will provide an interesting option to test the inexperienced Hawaii defense.

Vanderbilt’s biggest strength may be in it’s secondary, which is important against this Hawaii offense that will attempt to pass the ball plenty. The Commodores get back 5th year senior safety Max Worship, senior cornerback Jaylen Mahoney and former 4-star recruit De’Rickey Wright. The coaching staff has made note of their depth being an strong, which will keep them from being worn out by any tempo or play volume the Rainbow Warriors deploy.

I think the impact of the program overhaul at Hawaii isn’t priced in enough on this point spread, it’s starting to move in that direction though so this is a play you should lock in as soon as possible. I’m on Vanderbilt minus the points in this one, as this spread should be in the double digits.

Hawaii doesn’t have the talent to deploy the type of system Chang wants to run and as much as Vandy is overmatched in the SEC they have the talent edge here. The Commodores have been on the island all week, so it should give the Rainbow Warriors less of an advantage when it comes to travel. I think Clark Lea’s program kicks off year 2 in a big way.