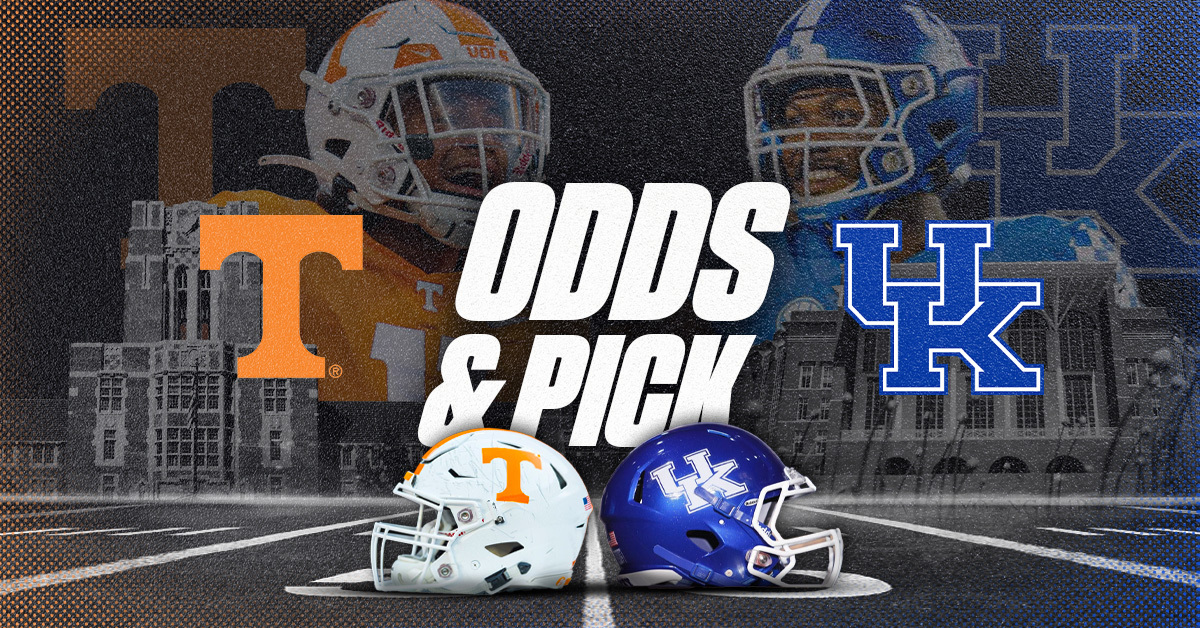 Many will say we found out what type of team this Tennessee program has two weeks ago against Alabama. But this is college football, we’ve got 19 year-old kids out there, we see it every weekend, the let down is always inevitable. The Vols scheduled things wonderfully with Tennessee Martin the next week, but can they lock in for a visit from #19 Kentucky? The Kentucky vs Tennessee odds tell us they’ll be just fine.

The Wildcats are coming off an impressive win over Mississippi State in week 8, ending a two game losing streak. Welcoming back quarterback Will Levis was integral to that, now this week they are expecting the return of wide receiver Tayvion Robinson. This Mark Stoops coached team could be at full strength for the first time this 2022 season.

Tennessee sports betting markets make the Volunteers 12-point favorites at home on Saturday night. The Vols are 3-1 against the spread as home favorites this season, while Kentucky is a perfect 2-0 ATS as road underdogs. The game total for this game has dipped two points from it’s opening number of 63 in the Kentucky vs Tennessee odds.

Tennessee’s offense looks like a juggernaut, much like those ones we saw from Alabama in 2020 and LSU in 2019. Josh Heupel’s team is averaging 7.2 yards per play and 47.7 points per game. As a result, they’re now +1500 at PointsBet to win the National Championship in 2023.

The offense is driven by Hendon Hooker, but he can’t do without his offensive line. The Volunteers are allowing a nation best 12.5% pressure rate and 7th best 15.7% stuff rate. Hooker has been able to push the ball downfield plenty as a result, averaging 12.2 yards in throw depth. They overwhelm opponents with pace too, averaging 20.6 seconds per play. Any defense that wants to stop them needs to have depth on the defensive side of the ball.

DeVonta Smith through 7 games in his Heisman season:

Jalin Hyatt through 6.5 games this season:

The Volunteers WR has been SPECIAL pic.twitter.com/VRz16MLw05

The quality of the Vols defense is still up in the air but there’s talent in the front four led by Byron Young. Tennessee can stop the run, ranking 21st in stuff rate and allowing just 3.8 yards per carry. Its against the pass where they have issues, only Ohio is allowing more passing yards per game. They struggle to pressure the passer and as a result opposing QB’s are completing 62.8% of passes for 7.3 yards per attempt.

Is this Kentucky defense up to the task when it comes to stopping this Volunteers offense? I think they just might. We saw what they were able to do to neutralize Mississippi State last week, they could draw on that success here. They’ve been dominant against the pass despite a complete lack of pass rush, averaging just 1.4 sacks per game.

The secondary has looked elite, ranking 19th in yards per coverage snap and allowing just a 56.2% completion percentage. The two upperclassmen, Carrington Valentine and Keidron Smith have a passer rating below 60.0 when targeted. They aren’t too shabby against the run either, allowing 4.5 yards per carry and ranking 29th in stuff rate.

The offense will have the trio of Will Levis, Tayvion Robinson and Chris Rodriquez playing together for just the second time this season. But the offensive line has been a major problem this year, they rank outside the top-100 in stuff rate and pressure rate. Rodriquez has been able to save this offense since his return, averaging 5.5 yards per rush. Kentucky also ranks 8th in yards per pass attempt at 9.4 in 2022.

I see Kentucky as the team with the best chance to knock off Tennessee this season, not named Georgia next week, before a potential SEC Championship game. They’ve been able to disrupt opposing offenses passing attack without generating a pass rush, which bodes will in this matchup against a stout Tennessee offensive line.

These two teams met last season in a shootout. Kentucky allowed far too many explosive pass plays and I think Mark Stoops remembers that. I expect this Kentucky defense to force the Volunteers to earn every touchdown and drive the distance of the field.

We haven’t seen the best offensive performance from the Wildcats yet, but I think at full strength we do here. The Vols haven’t tackled well this season, Robinson and Rodriquez can find success in the open field.