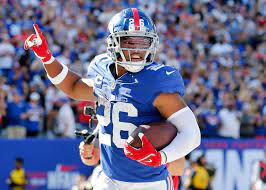 This late in the season, bargains with high floors and high ceilings are rare. Pricing isn’t as volatile as it was through the first month or two, and we have a solid grasp on how to gauge each player for a given week.

How, then, do we find value?

As always, we look at salaries and players relative to others we would consider using in a lineup. Just because someone is expensive does not mean they are without value. Conversely, a low price tag is not always a sign that we should buy in because of the discount.

In particular, this week’s group of players does not feature anyone especially cheap. That’s not a problem. Compared to others in their price range or at the same position, we can identify these three as undervalued players.

RB Saquon Barkley – NYG $6,500 at MIA – It’s been a long season for running back Saquon Barkley — and the New York Giants, as a whole — but the superstar finally — finally finally — looked like he was playing at full strength in last week’s victory against the Eagles. It wasn’t even his production that mattered. Barkley was on the field for 86 percent of the offense’s snap and looked like he was ready to shoulder the workload typically associated with a featured back.

He’ll have to fill that role in Week 13.

Quarterback Daniel Jones has already been ruled out for the game, and Mike Glennon will step in for his second appearance and first start of the year — Glennon previously relieved Jones when the starter was knocked out of the game against Dallas. In his short time under center, Glennon threw a touchdown pass to his running back — at the time, Devontae Booker.

There have also been reports that New York wants to get Barkley more involved. No kidding. The reports are not necessarily something we can use for a foundation of a play we want to make, but we can appreciate some acknowledgement of the situation. We know he needs more touches, and now we know you know it, too.

Confusing? Maybe. But Barkley’s modest price tag and expected usage are straightforward enough for him to be an undervalued play for Week 13.

QB Matt Ryan – ATL $5,800 vs. TB – When he eventually retires, Matt Ryan will go down as one of the players that fantasy writers targeted relentlessly throughout his career simply because of his relative value. That is, outside of a few seasons when Ryan was putting up prolific numbers on a regular basis, he was often considered inconsistent, but with extreme potential — and this frequently allowed fantasy football managers to gain exposure to Ryan for a low investment.

How is that any different than what we would write about Ryan now? He’s inconsistent. His potential is extreme. His salary is low.

The matchup with the Tampa Bay Buccaneers is going to scare people away from Ryan, but let’s not forget that the Buccaneers have an impenetrable run defense. Maybe Atlanta tries running into a brick wall a few times, but eventually the offense will have to turn to the aerial attack — and that becomes more of a necessity if Tampa Bay performs how many expect it to by pulling away with a big lead. The Buccaneers have actually allowed the fourth-most passing touchdowns in the league.

Ryan is an obvious risk with a shaky floor. He has delivered negative fantasy points on OwnersBox in two-of-the-last-three weeks — where you, dear reader, outscored Matt Ryan on those days. Still, he has thrown multiple touchdown passes in more than half of his games this year and has the divisional familiarity working in his favor against Tampa Bay. He has reached 300 passing yards against the Buccaneers in three-of-his-last-four and five-of-his-last-seven head-to-head matchups.

WR Brandon Aiyuk – SF $5,600 at SEA – It’s all about usage and opportunity when it comes to Brandon Aiyuk in Week 13, and he is in an outstanding position to shine. Unfortunately for him and the San Francisco 49ers, Aiyuk’s ascendance to the top of the depth chart is directly correlated with the injury to Deebo Samuel, but we can’t fight what this means as a result.

Samuel had emerged as a ‘go-to’ option both in the passing game and rushing attack, but that was Aiyuk’s opportunity in the past — he had seven carries and two rushing touchdowns last year. It’s likely that San Francisco goes back to this gameplay in with Aiyuk sliding into Samuel’s role.

Of course, Aiyuk may strictly operate as a wide receiver, and we would have no problem with that approach. He has already seen at least six targets in four-of-his-last-five games, and he will be facing the league’s most forgiving defense in yards allowed and a secondary that has given up the second-most passing yards in the NFL.