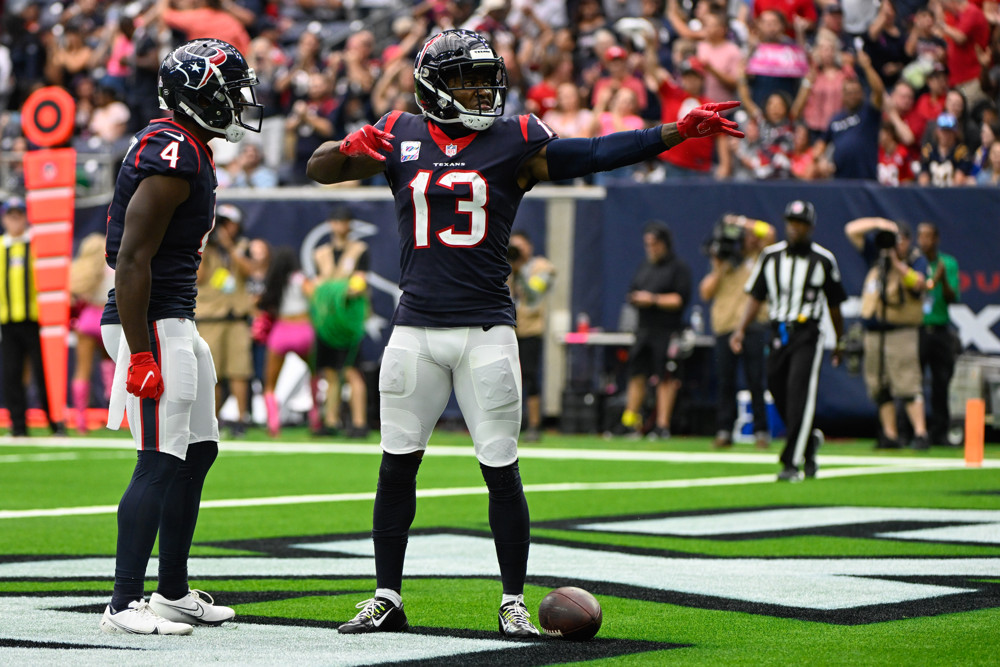 Week 7 is here and I’m going to give you some receivers to anchor your lineups. If you have been paying attention to fantasy numbers throughout the first weeks, you would have noticed that we may be shifting away from the big point totals we’re used to running backs giving us and focusing on more receiver based builds, so finding three guys to anchor your lineups is very important. Here are 3 players to take in your OwnersBox week 7 NFL DFS lineups. Again this is a brutal week for bye’s, so finding the right guys is going to be tough.

When looking for players I want to target this week at the receiver position, I sort the bottom of the Pass DVOA rankings on football outsiders and find the worst defenses, and then go to exploit those matchups. This week I am targeting receivers who are playing against the Chiefs, Raiders and Titans.

Cooks is averaging 8.4 targets/game in this Texans offense that has struggled to score a lot of points, as well as averaging 9.8 yards per catch with one touchdown on the season. As a veteran on this Texans team which is coming off a bye week, I expect them to get the ball in their playmakers hands in an attempt to win back to back games and potentially ship him out of town for as much as they possibly can get.

The Raiders pass defense is giving up 7.2 yards/pass, 256 pass yards per game and nearly a 69% completion percentage. Should Brandin Cooks and Davis Mills be on the same page, this could be a great play for this week.

One of my favorite plays of the week is Brandon Aiyuk. I don’t think we have to worry about any Christian McCaffrey effect, as it seems as if he isn’t going to play this week. The Chiefs aren’t a great coverage unit and we saw what the WR2 can do against this Chiefs offense with what our good friend Gabriel Davis was able to do last week. Aiyuk came off a strong game last week where he put up 28.3 fpts and had a big time 11 targets.

The Chiefs defense is being thrown on the most of any team in the NFL, teams are throwing at a 69% rate against this unit, and giving up over 265 yards a game through the air. The Niners love to run the ball, but will have plenty of success throwing it against the Chiefs.

Alec Pierce has had a coming out party in his past two weeks. Pierce cut up an awesome Broncos secondary two weeks ago to the tune of 8 catches for 81 yards only to follow that up with a 7 target 1 touchdown performance against the Jags. Pierce has gained the trust of Matt Ryan and should be a nice cheap option for you to slot into your DFS lineups this week.

Leaders in receiving yards per game amongst rookies: