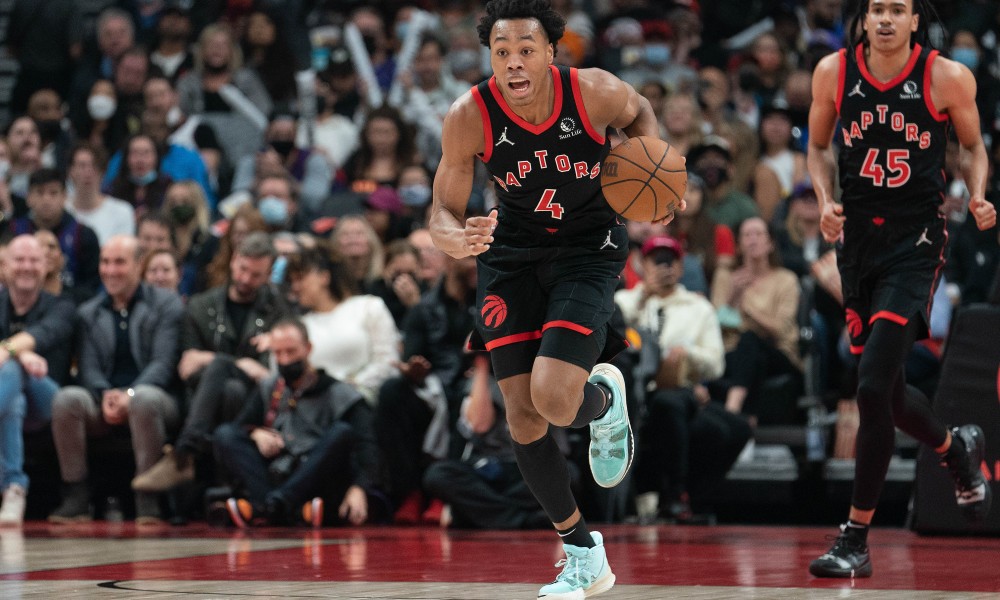 It’s hard to believe, but we’re already three weeks into another NBA season! This year’s rookie class was heralded as one of the deepest in recent memory, and early returns have proven that assessment correct. Let’s dive into our early rookie rankings, based on how the draft class of 2021 has fared thus far.

It’s tough to make a case for anyone other than Barnes as the most impressive rookie to this point, though only Evan Mobley would realistically be in that conversation. Through nine games, Barnes leads all rookies in points per game, rebounds per game, minutes per game, and PER.

His early numbers are quite impressive – impressive enough, in fact, to keep him in the starting lineup even with Pascal Siakam healthy. Both Siakam and Chris Boucher have returned, and in Siakam’s debut, Spicy P played center while Barnes remained the starting power forward. Barnes impacts the game on both ends of the floor, so it’s likely the No. 4 pick sticks in the starting five for the remainder of the season.

As mentioned above, Mobley is the only rookie in the conversation with Barnes for best rookie at this point. Mobley sports four double-doubles and two games with at least 23 points. On the defensive end, he leads all rookies in blocks and has recorded a block in all but two games on the season.

Mobley’s impact is apparent by looking at the NBA standings. Perennial cellar-dweller Cleveland commands a 7-4 record and the fifth seed in the Eastern Conference thanks to his contributions, and he’s firmly in the running for Rookie of the Year.

The Michigan product has immediately displayed his speed, athleticism, and high basketball IQ in the early goings of the season. He’s started every game for Orlando, and despite the emergence of Mo Bamba and subsequent return of Chuma Okeke, Wagner has stuck in the starting five. He looks to have the makings of a long-time starter in the Association thanks to his across-the-board contributions. He’s already flashed his ability as a high-level scorer.

Duarte has taken full advantage of numerous backcourt injuries and made the most of his playing time thus far. He’s logged plenty of meaningful minutes and isn’t afraid to shoot, even in big moments.

On the season, he’s averaged 13.8 field goal attempts (5.8 from three), failed to score in double-figures in just one game all season, and shot lights out with impressive 45/42/87 shooting splits. As one of the oldest players drafted in recent memory, his maturity and poise have been on full display.

The Australian phenom has gotten off to a strong start to his NBA career and done exactly what was expected of him. He’s a great facilitator, and as a 6’10 point guard, he’s a strong rebounder.

Shooting and turnovers are warts that were known about when he was drafted, but his size, IQ, and playmaking abilities more than compensate for those deficiencies.

On the season, he’s recorded one game with at least 10 assists, one with at least 10 rebounds, and one double-double. He’s in the perfect situation to work out his decision-making and develop as a shooter on a rebounding team that’s not likely to win many games.

Mitchell’s production certainly doesn’t jump off the page, though his work as a defender is where he makes his bones. Mitchell has been asked to defend some of the best scorers in the NBA and has risen to the challenge as a lock-down specialist.

He’s also started to come along on offense as of late, averaging 12.6 points, 4.4 assists, 3.8 rebounds, and 1.3 triples across his past five games. These developments are highly encouraging for Mitchell to become a well-rounded player, but for now, his most valuable contributions are outside of the box score.

Despite playing just over 19 minutes per game, Sengun leads all rookies in steals per game. The big man has been so efficient with swipes that he racked up 15 over his first six NBA games.

Cunningham has only played four games after starting the season injured, so we’re dealing with a small sample size with him at less than 100%. Still, we’re talking about rookies who have played the best, and he’s eighth as of now.

In three games with at least 29 minutes, Cunningham has averaged 16 shot attempts, so he’s stayed aggressive despite his miserable shooting. He’s been a hound on the boards as well, and recorded his first double-double with an 18/10 showing against Philly.

The No. 1 pick is sure to improve on his shooting woes, so there’s no reason to panic about his inefficiency. His confidence and ability to rebound at a high level are encouraging signs.

Coming into the season, one of the biggest concerns about Green was whether he could be more than just a scorer. So far, the answer is no, and he hasn’t done particularly well in that department.

Green’s signature game was a 30-point outing in which he set the Rockets’ rookie record for made threes (8). He also has a 24-point game under his belt, but the rest of his performances have been lackluster to say the least. Green needs to work on other parts of his game, improve his shooting, and clean up turnovers.

Suggs’ athleticism and upside as a playmaker and scorer are evident, but he hasn’t put it all together yet. Suggs has recorded as many assists as turnovers while shooting dreadfully from the field and from three. He’s still got a long way to go if he wants to succeed at the highest level.