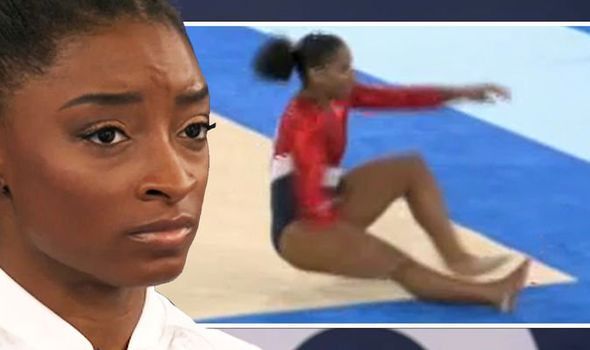 Simone Biles came to Tokyo as the gymnastics Superstar for the United States. This morning, she withdrew from the “team final” competition with a “medical issue” leaving her teammates alone to defend their Olympic title.

She began the finals on the vault, where the landing she usually sticks went south as she fell forward onto her right leg.

Here's what we know about #SimoneBiles pulling out of the gymnastics team final event so far https://t.co/9dU8Tulfqs #Tokyo2020 pic.twitter.com/hQokk81NHW

Right after this unusual landing, she left the floor with her trainer and came back with a wrapped leg to say goodbye to her teammates. She looked really distraught, and could not stop shaking her head. I mean… I would be disappointed too, and especially now, knowing Russia goes on to beat out my team for first in this event. However, I can also see this defeat as a huge motivator for team USA, so I hope to see them come back even stronger tomorrow.

I have to wonder if this medical issue was rising up before the public even knew about it (I mean that would probably make sense, to be honest). But get this, I saw this TikTok last week of Simone walking back from the vault- if you can read her lips, it looks like she is saying “My legs cant f*cking do this anymore”. SO I wonder if she has known she was on the verge of an injury for a while now but kept pushing through for her country? KIND of adorable Simone, you rock.

Speaking to her mistakes the US team coordinator left things on a high note, saying he is of course proud of the way Simone had trained and her leadership skills for the team. He equates her performance so far in these games, which has not been on par with her past, to that of a football player dropping the ball in the endzone or a quarterback throwing an interception. Basically pointing out that mistakes happen in every sport and a huge part of gymnastics is the mental side of things. I never thought of it that way, but his analogy really put it into perspective that people might be blowing this scandal out of proportion. Maybe the fact that gymnastics is more of a solo sport makes it harder to visually equate errors like these to that of a team sport. With gymnastics, when you see someone mess up the spotlight is on them and only them. Which, in turn, causes the people to freak out saying that she specifically, has lost her touch. If I were Simone, and all I had racing through my head before a triple-double-quadruple backflip on a raised bar was, “they think I’ve lost my touch” well honestly, I’d probably fall off too.

On a happier note, Simone could be back Thursday to defend her title in the all-around finals and also qualified for all four of her event finals later this week. A tweet from Team USA Gymnastics says she is going to be assessed daily to determine her future clearance. Fingers crossed she can get back asap to keep crushing it! Simone, if you are reading this, keep your head up queen, you can friggin do it.