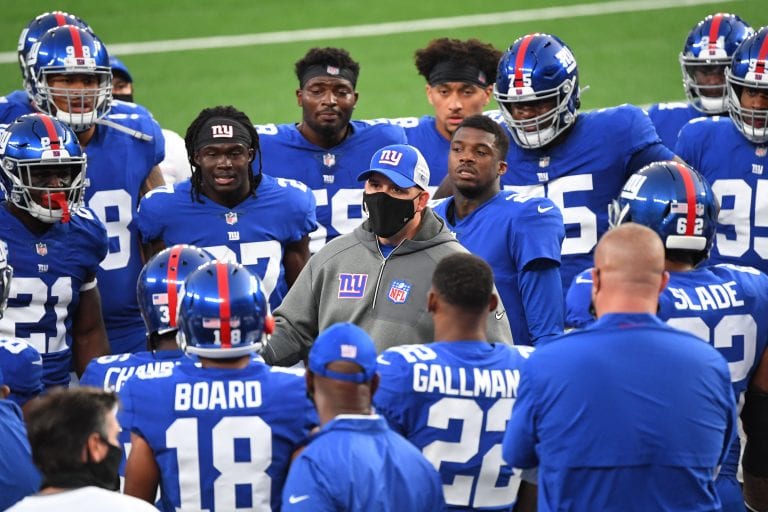 The New York Giants fan base has seen their team attempt their rebuild for the last 4 seasons, which has resulted in a 15-33 record. The Giants front office has seemed frustrated at times and is ready for some change. The Giants decided to spend some money in the offseason inking Lions receiver, Kenny Golladay to a four-year deal worth 72 million. Daniel Jones will have a true number 1 receiver who can hopefully make an impact right from the gecko. The Giants also agreed to terms with Tennessee Titans corner, Adoree’ Jackson who will become their number 2 corner on the team.

There is the reason for optimism for the Giants as they had the 8th best defense in 2020. The big change needs to be with the offense who ranked 23rd in 2020. The Kenny Golladay signing should help and the return of Saquon Barkley will also be a major boost to this Giants roster. The big key to success for the Giants is if Daniel Jones can actually utilize his weapons surrounding him.

They will be coached by Joe Judge for the second year in a row, who finished with a 6-10 record in 2020. 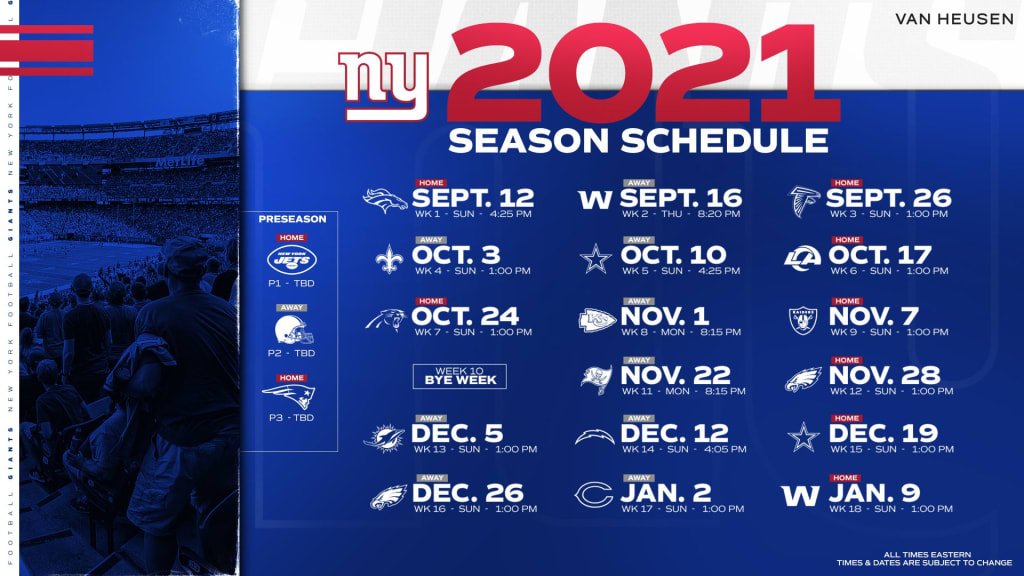 Hardest Games: The Giants have a couple rough games on the schedule, which includes a week 8 matchup in Kansas City and a week 11 matchup in Tampa Bay. There is no doubt the Kansas City Chiefs will be a hard matchup for any NFL team for the 2021 season as they were the 2019 Superbowl champs and 2020 Superbowl finalist. The Chiefs have a powerhouse of an offense, which was ranked #1 in 2020 (Lineups.com). They had the most passing yards in the NFL and second-most pass completions out of all NFL teams. Patrick Mahomes is an extremely talented quarterback who has a strong arm and lots of weapons surrounding him including WR1 Tyreek Hill. The Chiefs finished with a 14-2 record, home/away splits were 6-2 at home compared to 8-0 on the road.

My second hardest game for the Giants is their week 11 matchup against the Tampa Bay Buccaneers. The Bucs are the defending Superbowl champions and will have all 22 of their starters returning for the 2021 NFL Season. Anytime you have to face the GOAT, Tom Brady, you can expect a tough matchup. The Buccaneers had the 5th best offense and the 8th best defense in 2020. The Buccaneers got better and better as the year went on, which means a full offseason could make the Buccaneers a bigger threat in 2021. The Buccaneers finished with an 11-5 record and finished the 2020 season with an 8 game win streak including playoffs.

Easiest Games: The Giants have a chance of starting the season with a 3-0 record. The toughest game of the three would be week 2 away against the Washington Football Team. The Football Team has a really nice defense but has some question marks with Fitzpatrick leading the team at quarterback. In week 3, I think the Giants have their easiest game on their schedule playing the Falcons at home. If the Giants want to have a chance of making the playoffs, they need to win these games. The Falcons have a fresh new look with the Julio Jones departure, which definitely hurts the Falcons offense. The Falcons also allowed the most passing yards in the NFL in 2020. The offense got worse and the defense was ranked #19 in 2020.

The Giants will have the opportunity to start the year off right away with a victory. In week 1, the Giants will be at home against the Denver Broncos. The Broncos are currently deciding which quarterback will be leading the charge in 2021, it’s between Drew Lock and Teddy Bridgewater. Whoever is the starting quarterback will not play a huge factor, as both of these options are not great. The Broncos will have star receiver, Courtland Sutton back from his injury and will also see Jerry Jeudy in his second year of action. I definitely think this is one of the Giants more winnable games in the 2021 season.

Most Exciting Game: Any game which could have playoff implications will be exciting for New York Giants fans and general NFL fans. The Week 15 matchup at home against the Dallas Cowboys caught my eye. If the Giants have a strong start to the season, this game should have major playoff implications. The Cowboys are definitely the favorites to win the NFC East with Dak Prescott returning from his injury. We could potentially see a rowdy crowd and a very important game come week 15.

Daniel Jones did not record a 3 touchdown game in 2020 and only had 11 passing touchdowns compared to his 10 interceptions on the year. Jones was hurt for most of the second half and did not have Barkley for pretty much the entire season. The Giants 2020 offensive line was ranked by PFF #31, which is horrendous, they definitely did not put Daniel Jones in a position to succeed.

This is the most important year for Jones to be able to show the front office he can be the QB1 for the Giants. If Jones struggles, I see the Giants trading for or drafting a new quarterback in the 2022 NFL draft.

After suffering a season-ending ACL tear in week 2, Barkley looks ready for the 2021 NFL season. The return of Saquon is exciting and the entire Giants offense could turn things around this year. Barkley is an explosive running back who is 5’11 and weighs 233Ibs. In his previous two seasons, Barkley rushed for over 1,000 yards and had over 200 rushing attempts.

If Barkley could reproduce these numbers in 2021, the Giants offense should flourish and have a great 2021 season.

The million-dollar question! Barkley started all 16 games in his rookie season, but in 2019 he started 13 out of the 16 games. This then leads us to last season where Barkley only played two games after suffering a season-ending injury. The Giants want Barkley for the entire season, which means they will most likely be cautious with his return.

We cannot ignore Barkley’s previous two season-altering injuries, they happened and greatly impacted the Giants success. The good thing, Barkley is on a contract year, which means if he can show he can stay healthy he will get paid. Barkley should be greatly motivated to have a healthy and impactful season.

The Giants made a must-needed signing in Kenny Golladay, they get a true No.1 receiver for the first time since trading Odell Beckham Jr. Golladay will be joined by Sterling Sheppard and Darius Slayton. Both receivers coming off down years, Sheppard was hurt for most of the year and when healthy was not productive. Slayton had a very disappointing year only reaching the end-zone 3 times versus 8 times in his rookie season. Both these receivers have the possibility of bouncing back with the new addition of Kenny Golladay. He will relieve pressure and will face every team’s number 1 cornerback for the season.

Will Kenny Golladay excel with the Giants?

Golladay is a big receiver at 6’4, which is exactly what the Giants need. Daniel Jones should enjoy throwing to such a big target and hopefully, they can create chemistry early on in the season. Golladay averages 16.8 yards per catch in his career.

The area of concern from some people is the threat of an injury. Golladay only played 5 games last season and has already sustained a 3-week setback in training camp because of a hamstring issue. Keeping their No.1 receiver healthy will be a key puzzle piece for a successful season.

Will we see a big jump from Golladay and Jones similar to what Stefon Diggs did with Josh Allen?

The Giants have added veteran Vikings tight-end, Kyle Rudolph to their roster to complement Engram. I do really like this signing for the Giants because Engram will get the opportunity to learn from Rudolph to help his development. The 26-year-old, Evan Engram has had high expectations since being drafted in the first round of the 2017 NFL draft. He has shown flashes of promise but hasn’t shown consistency in his game. Rudolph had a catch rate of 75.7% in 2020 versus Engram’s catch rate of 57.8%.

Rudolph will get the opportunity to battle for snap shares, which should in theory create more competition among the tight ends for playing time. I think both of these tight ends will see split time, instead of the Giants choosing one tight end over the other.

Who is your favorite bounce-back candidate for the 2021 season? pic.twitter.com/mVQdewyIsp

The New York Giants defense had a very good 2020 season ranking 8th. In the offseason, they made a major splash adding Tennessee Titans cornerback, Adoree’ Jackson to a contract. He becomes a valuable asset for the Giants who get another back-end threat to their already strong secondary. Jackson is a very nice addition to be paired with star cornerback, James Bradberry.

They also drafted edge rusher, Azeez Ojulari in the second round. Most football analyses projected Ojulari to be drafted earlier than when the Giants drafted him. This was a bright spot for the Giants in the 2021 NFL draft. Ojulari should get the chance to make an impact in his rookie season.

If the Giants can create a lot of turnovers (which they should), the offense will be tasked with taking advantage of these turnovers. The New York Giants defense is the reason why I think they will compete for the division title in 2021.

Drop an emoji to describe our defense 🔥 pic.twitter.com/AxGyHGIiGd