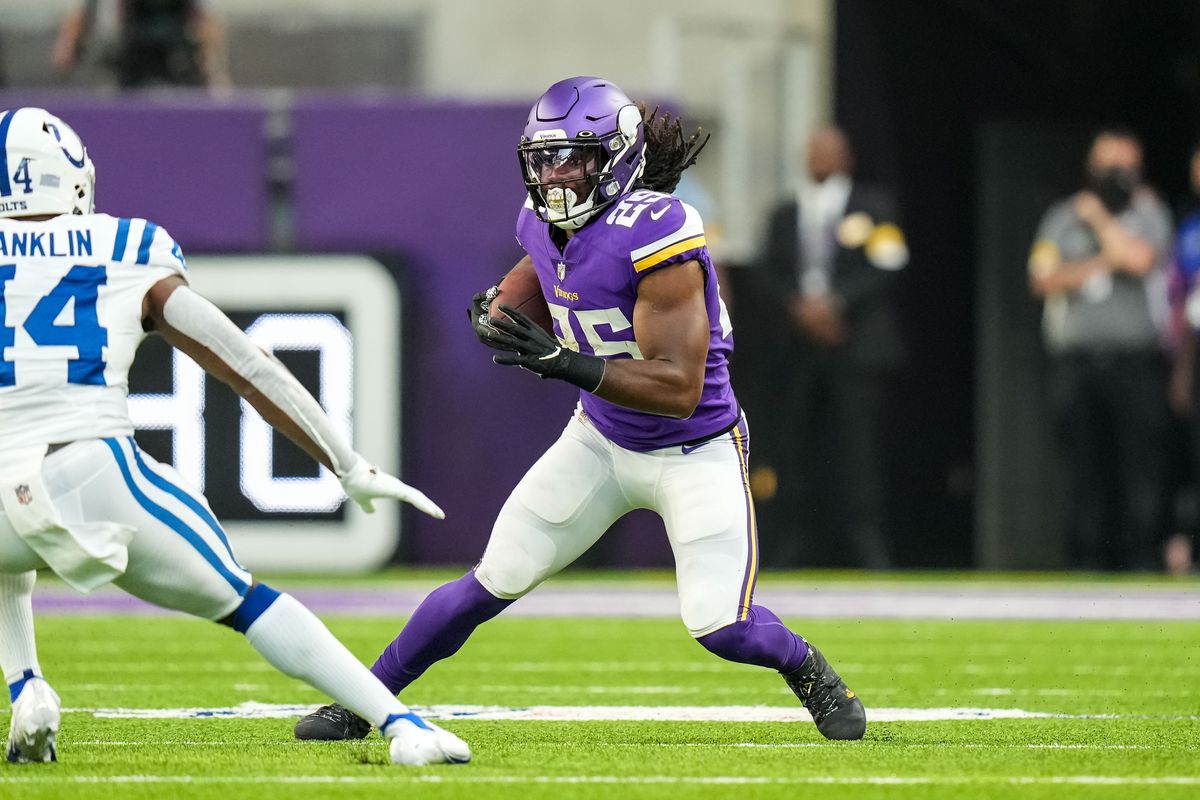 The Vikings received a glimmer of hope this offseason when the possibility of Aaron Rodgers not returning to the Green Bay Packers actually became realistic. Unfortunately for Vikings fans, Rodgers will be returning to the Packers, which makes them favorites to repeat as division champions.

The Minnesota Vikings’ bright spot in the 2020 season was the emergence of their rookie wide receiver, Justin Jefferson. The LSU product was outstanding in his rookie season, as he accumulated over 1,400 yards and 7 touchdowns. 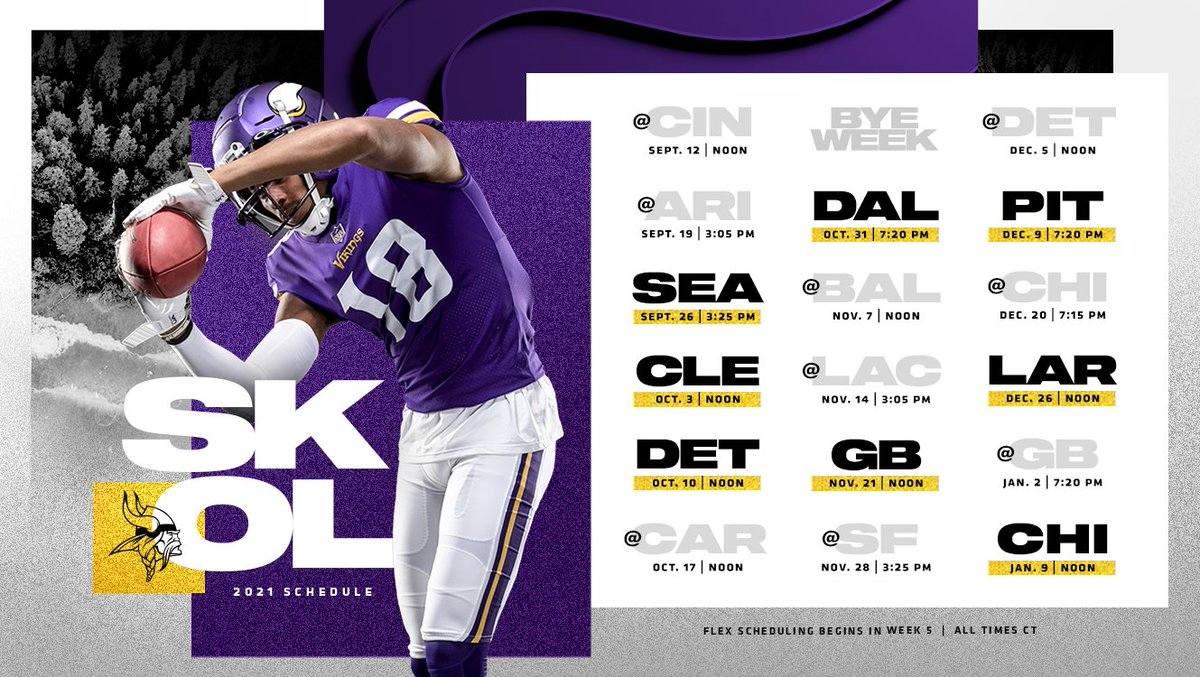 The Minnesota Vikings have the 5th hardest strength of schedule based on opponents’ 2020 win percentage (find it here).

Hardest Games: The Vikings have a pretty rough schedule for the 2021 NFL season. One game that caught my eye was January 2nd in Green Bay. The Packers will have a strong squad with the return of Aaron Rodgers. Any game at Lambeau stadium is a tough task with the weather playing a factor in the outcome. Last year, The Vikings surprisingly beat the Packers 28-22 at Lambeau Field, in which Dalvin Cook was unstoppable rushing for 3 touchdowns. The Vikings will need another performance such as last year’s if they plan on beating the Packers again on the road.

Easiest Games: The Detroit Lions will be one of the weakest teams in the NFL. The Vikings will get the chance to host the Lions on Oct 10. This should in theory be the easiest game on the Vikings schedule. The Lions will have a downgrade at the quarterback position going from Matthew Stafford to Jared Geoff. Also, the Lions lost start receiver, Kenny Golladay to the New York Giants in free agency. The Lions realistically have a chance to go 0-17 in the 2021 NFL season. Both of these games on the Vikings need to be won.

Most Exciting Games: There are a couple potential exciting games on the schedule for the Vikings. In the season opener, we will get to watch ex-LSU Tigers teammates Ja’Marr Chase and Justin Jefferson play each other first time since Chase got drafted. The Vikings will travel to Arizona to play the Cardinals who have the young and exciting Kyler Murray leading the charge. My favorite matchup is the Vikings traveling to Seattle to face-off against the Seahawks, we will get the opportunity of seeing two great receiving corps facing each other.

Kirk Cousins will be the starting quarterback for the Vikings for another season. He has been trending in the news as of late for his stance about the NFL policy and rules surrounding vaccinations. Hopefully, this does not affect the veteran QB for the 2021 NFL season.

Cousins gets a lot of hate for someone who has put up consistent numbers. If Dalvin Cook can stay healthy, Cousins should see another productive season. The one area of concern with Cousins is his ability to perform under pressure. In the past, Cousins has shown inconsistency and a lack of  “ice in his veins” come crunch time.

Dalvin Cook is obviously a game-changer who has the ability and skill to shift the outcome of any game. We had the pleasure of witnessing his amazing three-touchdown performance in Green Bay last season, which was not supposed to be an easy game by any means. Cook had the following stats;

The Vikings need Cook to stay healthy or else their season could turn from bad to ugly. In the past, Cook has flirted with some injuries which caused him to miss some games. If Cook is healthy for all 17 games, the Vikings should be one of the more stronger teams in the NFL.

Mattison is one of the better backup running backs in the NFL and if given the chance could step in to the RB1 role.

Justin Jefferson had an outstanding rookie season and will look to build on it for the 2021 NFL season.

The Vikings moved on from veteran tight-end, Kyle Rudolph, as they look to shift towards youngster Irv Smith Jr.

Should we expect a breakout season?

Irv Smith Jr. is a very talented tight-end who has the possibility of breaking out in 2021. The Vikings will be heavily relying on Jefferson and Thielen, as there 3rd options have been irrelevant in the past. This opens up room for Irv Smith to become the most trusted 3rd option behind the two receivers.

Irv Smith had only 11.6% target share, but this was with Kyle Rudolph competing for playing time. Surprisingly, Irv Smith had a 25% red-zone share, which is pretty high. If Smith can takeover some of Thielen’s red-zone targets, we can expect Irv Smith to have his best season of his career.

Minnesota Vikings’ defense was horrendous in 2020, which had Mike Zimmer quote saying it was the worst defense he has ever coached. The bottom of the barrel occurred when Alvin Kamara rushed for 6 touchdowns on Christmas Day. The defense needs to be much better in 2021, if the Vikings want a chance at making the playoffs.

The Vikings will have a lot of their veteran key pieces returning for this season. Linebacker Anthony Barr and Eric Kendricks will start the 2021 season healthy for the Vikings. Zimmer has been outspoken on how relying on rookie corners wasn’t optimal for the defense. In their second year, the rookie corners should see improvements as they adjust to the NFL.

This defense is very strong when they have a full healthy unit, expect a big bounce-back season in 2021.