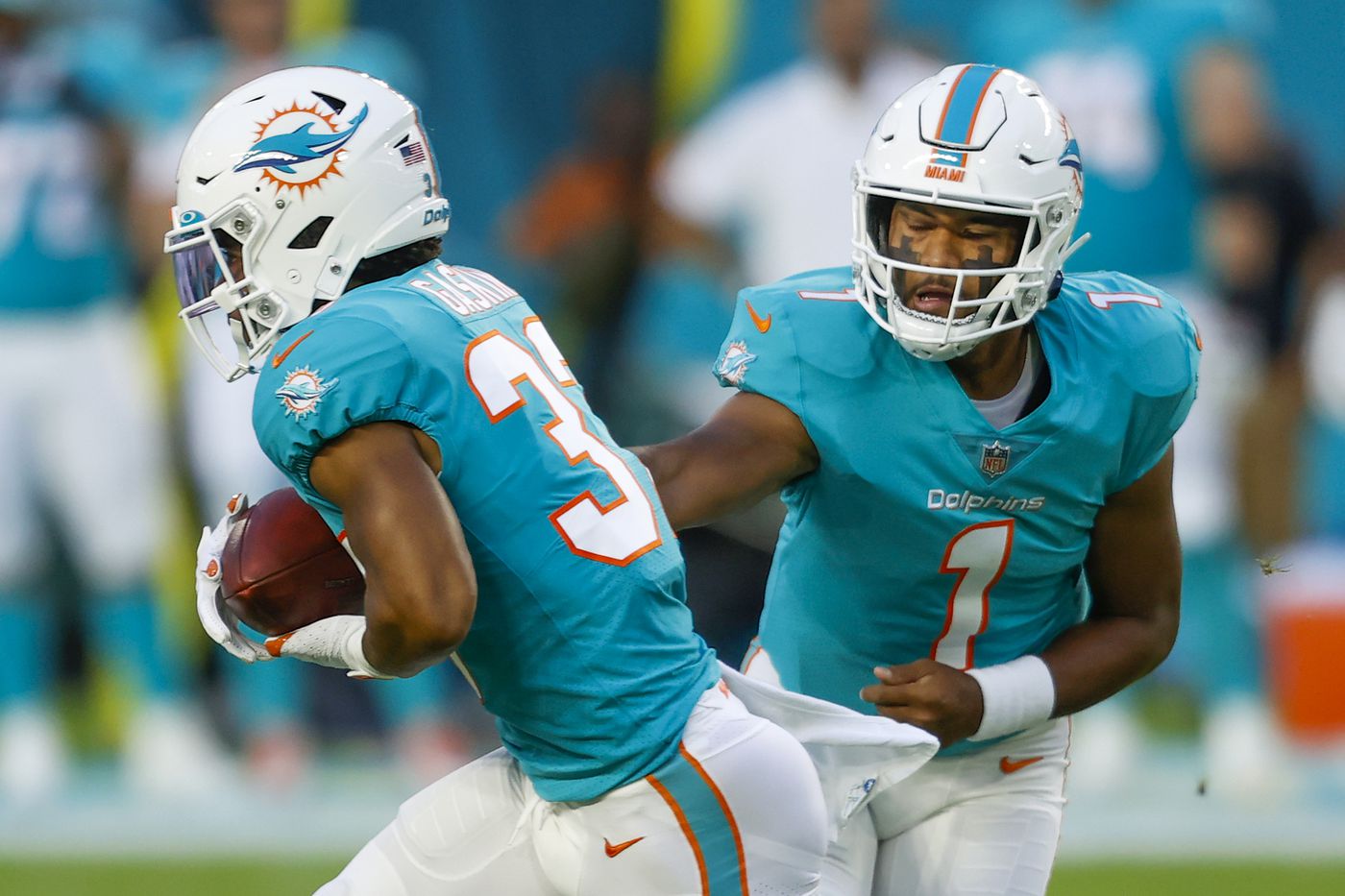 The Dolphins had a productive 2020 season barely missing the playoffs. They started the year with Ryan Fitzpatrick and surprised everyone by deciding to give the keys to Tua for the rest of the season. Moving on to this season, the Dolphins have added Will Fuller from the Texans and drafted Alabama receiver, Jaylen Waddle in the first round. Tua will have a ton of weapons surrounding him this season.

The Dolphins have a fairly easy schedule and should have a very good opportunity to make the NFL playoffs in the Wild Card spot.

Will Deshaun Watson be traded to the Dolphins?

The Dolphins are front-runners to trade for Deshaun Watson, per @CharlesRobinson

Teams are seeking pick protections in the event Watson is prosecuted or suspended in relation to sexual assault and harassment allegations from multiple women. pic.twitter.com/AXvtpK0ioB

THIS WOULD CHANGE EVERYTHING! It has been reported Deshaun wants to be traded to the Dolphins and would reunite with ex-teammate, Will Fuller. This would mean a complete change for the Dolphins who would go from a solid team to a for sure super bowl contending NFL team. Since Deshaun is under a lot of heat right now, it would surprise me if the Dolphins traded for him without knowing his potential suspension. 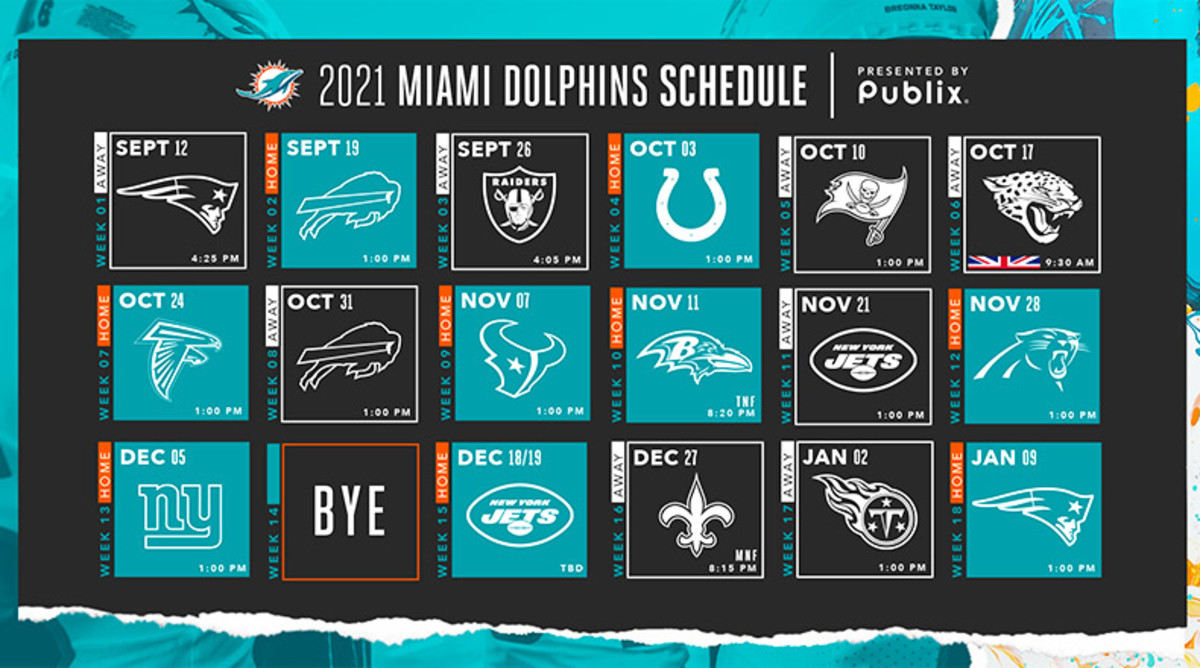 The Minnesota Vikings have the 5th easiest strength of schedule based on opponents’ 2020 win percentage (find it here).

Hardest Games: The two hardest games on the Dolphins schedule are on Oct 10 and Halloween. The Dolphins will have to battle with the Buccaneers in Tampa Bay. The Buccaneers have all 22 of their starters returning and will finally have a chance of a full pre-season camp with new QB, Tom Brady. The Bucs looked dangerous in the playoffs and I expect them to continue their momentum into the 2021 season.

The inter-division Halloween game in Buffalo should be a real test for the Dolphins. The Bills are a legit Super Bowl contending team with a lethal offense that is lead by stud quarterback, Josh Allen. The Bills added Emmanuel Sanders in the offseason who will be another weapon in Josh Allen’s arsenal. The combination of Allen and Diggs was unmatched last season and should only get better for the upcoming season.

Easiest Games: The Dolphins have an easy schedule, I highlighted the Oct 24th and Nov 1st games. On Oct 24th, the Dolphins will host the Falcons. The Falcons lost star receiver, Julio Jones, after having a rough season last year. It seems like the Falcons will be moving on from Matt Ryan sooner rather than later. This is a team looking to rebuild around pieces such as Calvin Ridley and newly drafted TE, Kyle Pitts.

The next easiest game is when the Dolphins will host the Texans. The Texans might just mess around and lose every single game this year. They have continued to lose key pieces and things are looking worse for them day by day. The only hope for the Texans is if somehow DeShaun is allowed and wants to play for the Texans for one last season. Watson has already spoken out about being his last game playing in a Texans uniform. Could this game be the first time Deshaun plays his old team??? We shall see.

Most Exciting Game: I think the most exciting game will be the October 17th game against the Jaguars! I know this is sort of a wild-card game, but the Jags have a decent team and will have an exciting rookie, Trevor Lawrence, running the show. Also, this game will be played in England, which only makes the game more exciting. If Tua is still the QB, we will get the opportunity to witness two young quarterbacks battle it out.

Tua had a completion percentage of 64.1% last season and had 11 passing touchdowns in 10 games played. This season will be a good test to see if Tua can take another step forward in the right direction. The Dolphins have surrounded Tua with some nice additions and they also have a very strong offensive line. If Tua is the starter for this season, I am expecting a breakout campaign.

Will Deshaun get traded?

I would be surprised if the Dolphins decide to trade for Watson with the allegations against him. The Dolphins trust Tua and drafted him in the first round because they believe in him. If they decide to move on, I could see them potentially regretting the decision in a couple of years. I think they should give Tua one full season, then decide if they think they should move on and trade for Watson.

The Dolphins added some depth in the offseason signing Malcolm Browns from the Rams. There have been speculations Brown had the opportunity to take over as the RB1 on the Dolphins. Brown had a very below average per season, which indicates Gaskin is the number 1 running back entering this season. I see these two splitting time this year with Brown getting most of the red-zone carries.

Any of these 3 receivers could be the WR1 for the Dolphins. The Waddle + Tua connection from Alabama will be very exciting to see this season, but also the big signing of Will Fuller who was productive in his years with the Texans. I can’t see any of these receivers having insane years and breaking records. I think the Dolphins will spread the ball around and these three will all have solid seasons, but nothing great. I don’t see any of them passing the 1,000-yard mark and 7 touchdown mark.

Mike Gesicki is the pure number 1 tight-end on the Dolphins. He will be competing with more competition in the offense with the addition of Fuller and Waddle. Realistically, if Deshaun gets traded to the Dolphins Gesicki and all of the receivers on the Dolphins’ value skyrockets. Unfortunately, with Tua under quarterback, I think Gesicki will take a step back this season. I think he will be a great red-zone target and could see an increase in touchdowns, but cannot see him topping his 700 receiving yards from last season.

The Dolphins’ defense was impressive last season and should remain a top 10 defense in the NFL. They allowed the 3rd least amount of touchdowns and were tied for most interceptions in the NFL. If the defense can remain solid and potentially slip into the Top 5, the Dolphins should have a very good chance at securing a wild card spot. 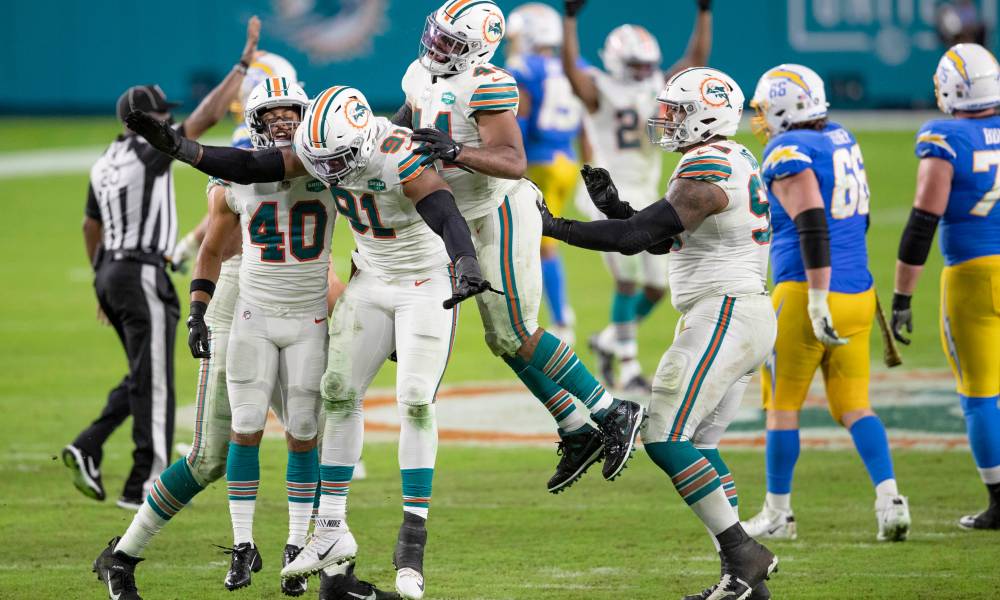