NCAA Tournament Betting: Round of 32 (Saturday)

How to Bet the Round of 32 in March Madness

Have a day Tyler! We had a fantastic Friday in the round of 64, going 11-5 on the day and improving our record to 22-14 for the tournament. If you’re new I’ll be betting on every single game of the NCAA Tournament so be sure to keep checking back every morning as the plays drop!

We move on to day 1 of the round of 32, with the lines getting tighter and the games becoming even more intriguing. Let’s see how we’ll fare in 8 games today. Looking to stay hot and keep adding to the bankroll!

The Baylor Bears seemed to be a popular pick to be the first one seed to be bounced from the tournament. With LJ Cryer out for at least the weekend and Jonathan Tchamwa Tchatchoua out for the season. But this team has the depth to survive. The Tar Heels thrive on winning the rebounding battle, but the Bears are going to make it competitive on the glass. If that’s the case, then James Akinjo and Baylor are going to earn more second chance opportunities with their 13th ranked steal rate to UNC’s 304th. The Tar Heels 237th ranked 3-pt defense is a problem against Adam Flagler and Kendall Brown as well.

Who will dictate the offensive pace in this game? Will it be Blue Jays that rank 222nd or the Jayhawks that are the 44th fastest in offensive possession length. Either way I think Creighton matches up quite well here, the battle inside between David McCormack and Keyshawn Feazell will be the difference. Especially with Kalkbrenner is out. Creighton has the #8 ranked 2-pt defense to counter McCormack and Agbaji’s heavy inside attack. Offensively if the Blue Jays can take of the ball, their length advantage should give them what they need to score around the rim.

The betting public seems to be all over the Vols in this game, our partners at BetMGM are seeing a 5/1 ticket count in favor of Tennessee at the time of writing. The Vols have the #2 defense in the country but I’m not sure they’ll have answer for Michigan’s 2-pt offense led by Hunter Dickinson. The Wolverines have some momentum from their comeback win over Colorado State and if they win on the offensive glass they can overcome their lack of ability to force turnovers.

This spread has moved quite a bit this morning, originally at 2.5 and now to 4.5 for the Friars. The Spiders forced Iowa, one of the most efficient offenses in college basketball, into 36% shooting on Thursday. Providence uses the free throw line as a crutch for creating offense but Richmond can keep them off the line. They’re 22nd in opponent free throw attempts per offensive possession. Grant Golden is going to need to keep Nate Watson and the Friars off the offensive glass, something they struggled with against Iowa. These teams are happy to slow things down but I don’t want to mess with a free throw fest in the second half.

You may be surprised to see such a low total between two very talented teams. But these guys are going to play at a snails pace, they are both outside the top-230 in offensive pace. They’re also going to be scoring more than the majority of their points inside against two top-15 defenses in KenPom’s adjusted efficiency. The cherry on top for me is that this total opened at 127 and at some books that aren’t BetMGM you’ll see the total a full point lower. The sharp money seems to be on this side and I’ll ride with them.

What a story the Peacocks are, having taken down tournament favorite Kentucky. St. Peter’s was an unconscious 53% from three in the game, scoring 27 of their 85 points from the perimeter. In the round of 32 they run into a Murray State team that is 21st in 3-pt defense (29.8%). The Peacocks typically rely on getting to the free throw line as well offensive and the Racers foul at a very low rate defensively. We saw how good Tshiebwe was in the Kentucky loss, look out for KJ Williams here. 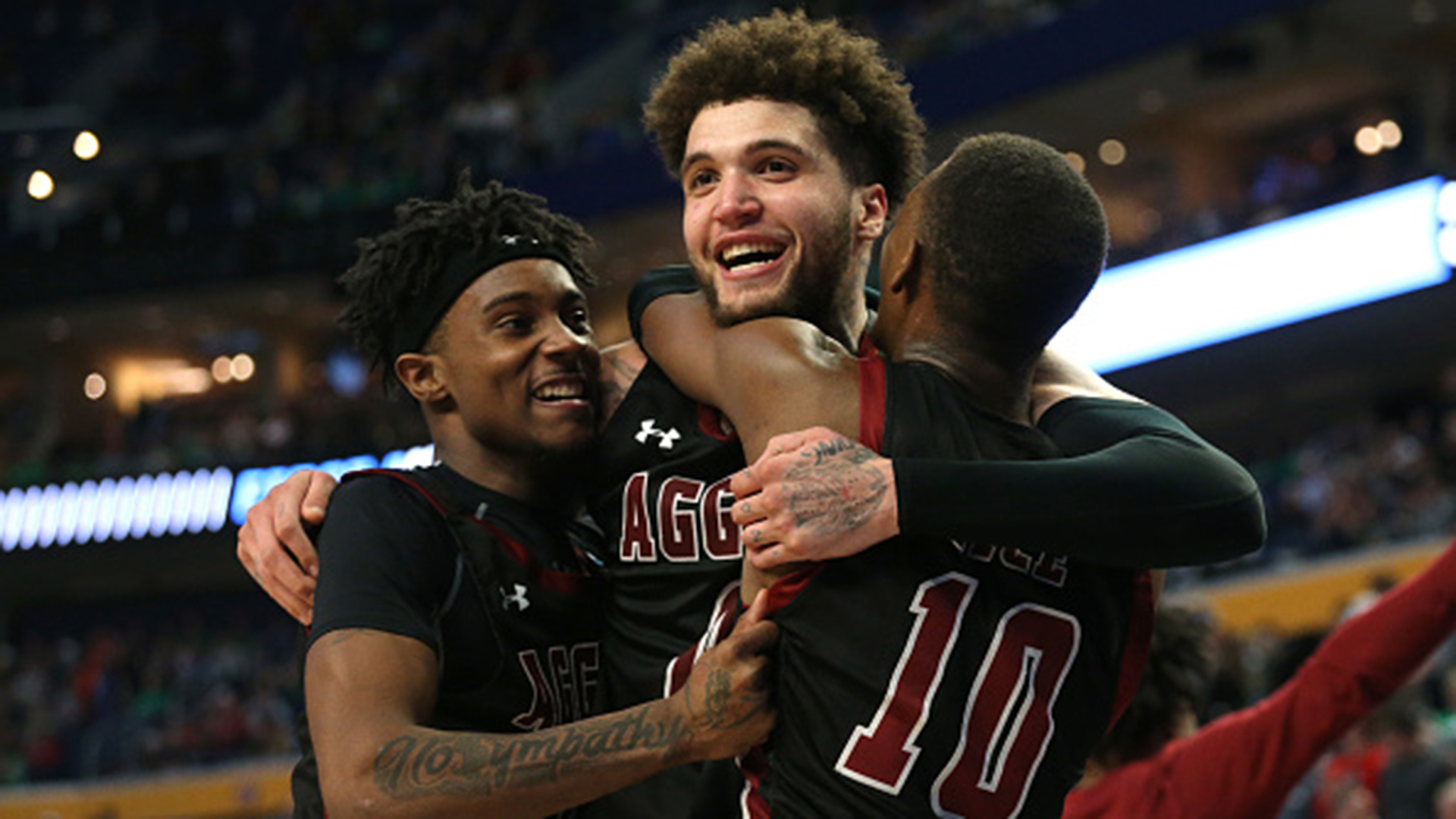 Teddy Allen looks like one of the most exciting players in this years tournament after torching UConn on Thursday night. Arkansas on the other hand took care of business against an efficient Vermont team. I’m not much of a fan of the Razorbacks, the offense lacks efficiency and relies too heavily on getting to the free throw line. The Aggies have a pretty significant size advantage to help them on the glass and are shooting 45.4% from the field. On the defensive side they’re 13th in opponent field goal percentage at 39.2%. New Mexico State is going to have a shot at getting the to the Sweet Sixteen.

The Memphis offense is pretty easy to figure out. They can play on the interior with just about anyone but they are the worst team in the country when it comes to turnovers. Lucky for them though, The Zags don’t force turnovers at a high rate, so staying competitive here is in the cards. On the defensive side they should be able to put up a fight against the Bulldogs #1 2-pt offense. Memphis is allowing opponents to shoot just 44.9% inside the arc. The only worry for me here is the pace of this game, if they’re running the floor so much then perhaps the game could get away from them late.