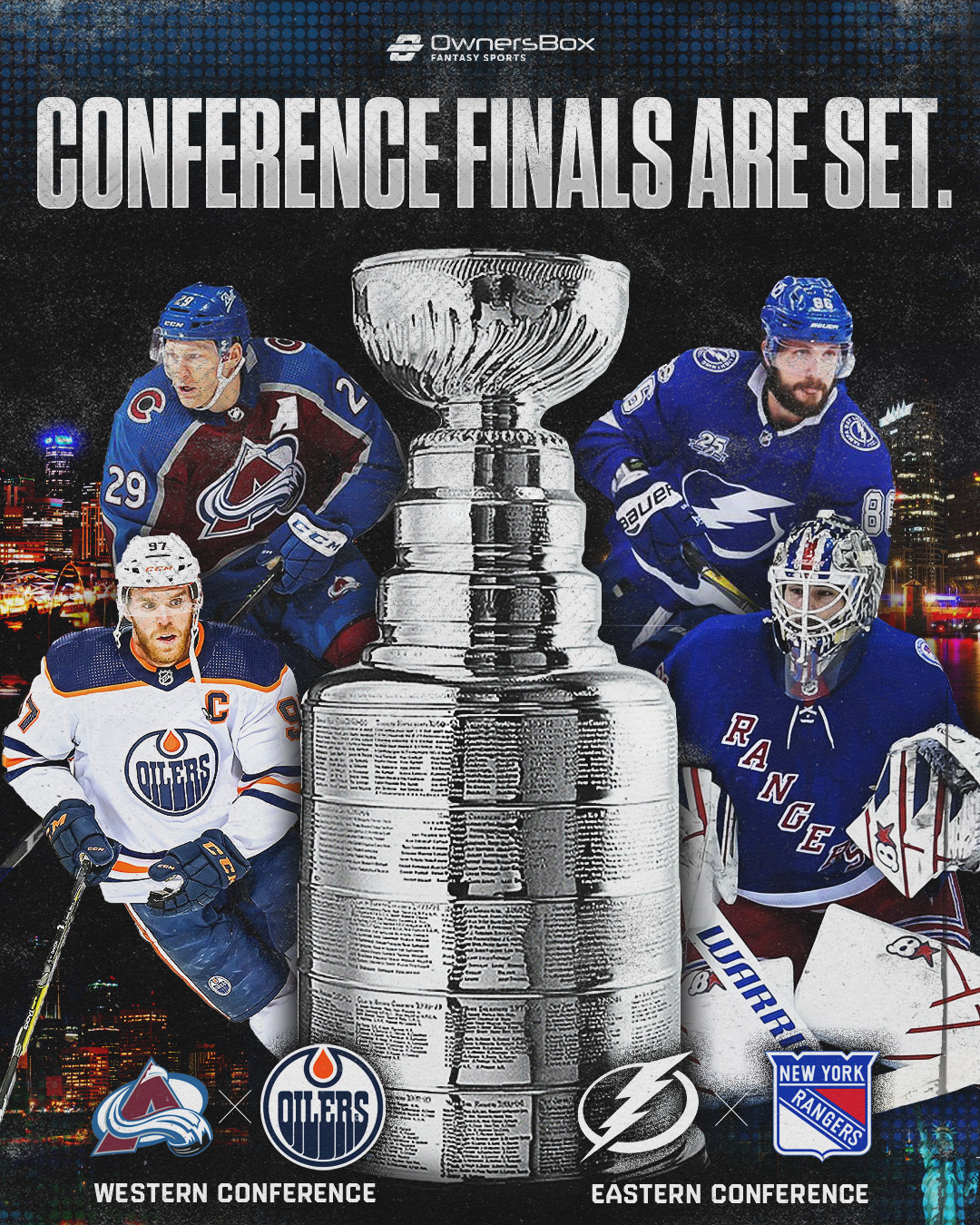 The second round of the NHL playoffs has concluded, and it is now time for the Conference Finals. With that being said it is now time to go over the updated Stanley Cup odds. The teams that remain are the Colorado Avalanche, Tampa Bay Lightning, New York Rangers, and Edmonton Oilers.

The team that opened the playoffs with the best Stanley Cup odds to win still has the best odds at +120 at Caesars Sportsbook. The Avs cruised through the Nashville Predators in Round 1 before eliminating the Blues in six games. Colorado has looked like a Juggernaut in these playoffs scoring 4.3 goals a game and having a postseason best 34.5% powerplay percentage. The Avalanche will play the Edmonton Oilers in the Western Conference Finals and are -250 to win the series in the Oilers vs Avalanche odds.

The back-to-back champion, Tampa Bay Lightning are the favorites in the Eastern Conference. They opened the playoffs with a hard-fought seven-game series against the Leafs. Then in round two, they swept the best regular season team in the NHL, the Florida Panthers. The Lightning are led by star goaltender, Andrei Vasilevskiy whose .925 career playoff save percentage ranks him third all-time.

His run in elimination games is nothing short of amazing, 10-0 in his career with six of those wins being shutouts. Tampa Bay is currently -190 to reach the Stanley Cup finals and are looking to become the first three-peat champions since the 1980s Islanders.

The New York Rangers, who have the runaway Vezina Award winner in Igor Shesterkin have been underdogs in every series thus far in the playoffs. If that isn’t enough they overcame a 3-1 series deficit against the Pittsburgh Penguins and came back from down 3-2 against the Carolina Hurricanes. Goaltender Igor Shesterkin is as solid as it comes and put up a .935 SV% and 2.07 GAA in the regular season.

The Rangers will have to figure out how to solve Vasilevskiy, as they have played against subpar goaltending throughout the playoffs. New York online sports betting markets list the Rangers at +155 to beat the Tampa Bay Lightning and advance to the Stanley Cup Finals.

The Oilers are led by the best player in the world, Connor McDavid, who has 26 points in 12 playoff games this season. They have looked shaky at times throughout this postseason but seemed to put it all together towards the end of their series against Calgary. In round one they defeated the Los Angeles Kings after being down 3-2. Then in round two, they lost game one by a score of 9-6 and went on to win the next four games to advance to the Conference Finals.

Connor McDavid is playing some of the best playoff hockey in recent memory right now.

If the Oilers can bring home Lord Stanley, they would be the first team from Canada since the Montreal Canadiens in 1993. They have the worst Stanley Cup odds at Ontario sportsbooks of any team remaining and are +205 to get past the Colorado Avalanche.