Some Positives to Take the Habs into Game 2

Some Positives to Take the Habs into Game 2

Before we begin, I am altering my previous statement to Habs in 5 but absolutely do not panic people, there is a lot of hockey left.

To begin I have a cazy fun fact, the Habs lost the first game of the finals the last three times they won the cup. So technically, if they won the first game this year it would jinx the cup win. So no worries, they are doing exactly what they are supposed to. they lost first to the LA Kings in 1993, then to the Flames in 1986 and to the Rangers in 1979- all three times proceeding to take the cup.

The Habs know they didnt play their best game and the upside to that is that it can only get better form here. Some viewers have been weighing in saying Caufield also didnt play his best game however, he is one of those players who can adjust to his opponent so honestly, it doesnt worry me at all. This game he will be coming in with a larger presence on the ice and I believe he can stand up to any pkayer no matter their size. 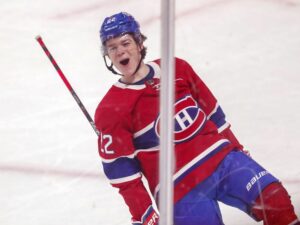 Opinions from the Habs bench itself, managed to stay positive as well with Petry saying, “we had some chances when the game was tighter — if we bury those chances, it’s a different game”. He’s not wrong, the game wasnt a huge blowout, it was more luck of the draw and finding those chances, in my opinion. Tonight the lads just need to capitalize on all chances to tie up the series and get their momentum back.

Its great to see and hear that they havent given up on themselves becuase their fanbase, myself included have definitely not! Habs in 5 is where I stand now and I am confident in my bets.