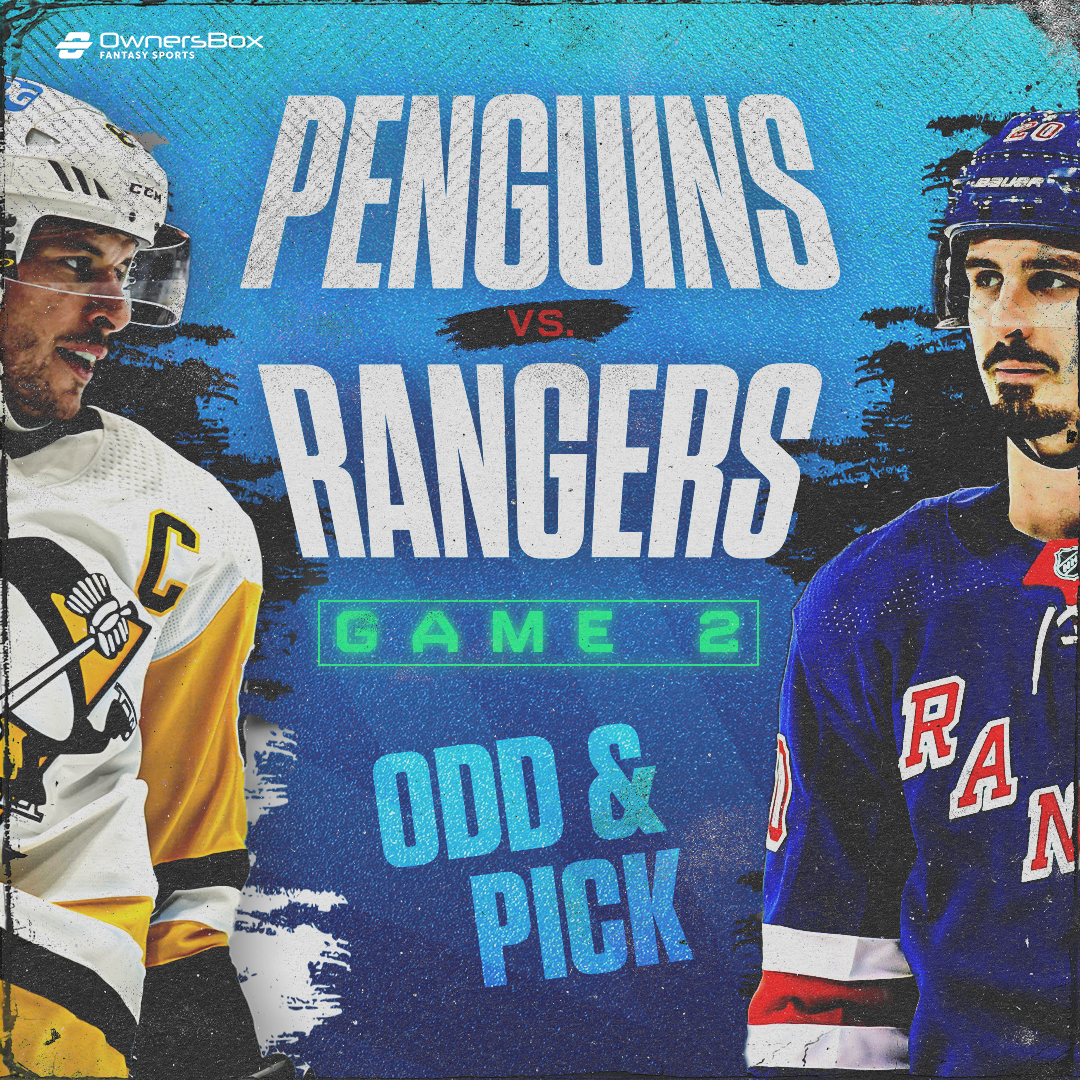 The New York Rangers and Pittsburgh Penguins took NHL Playoff hockey to another level on Tuesday night. With a total of 151 shots, the visiting team snuck past the Rangers at Madison Square Garden in triple overtime to win Game 1. Even though Pittsburgh laid the rubber on Shesterkin, New York finds themselves as home favorites in the Penguins vs Rangers Game 2 odds. Puck drop is set for 7:30 PM EST on Thursday, May 5th, 2022 at Madison Square Garden.

Evgeni Malkin scored the game-winner via a tip from a Jon Marino point shot in Game 1. The Penguins proved they shouldn’t be undervalued in this series even without Tristan Jarry. Pittsburgh were +125 road underdogs in the Tuesday NHL odds.

Let’s take a look at the Penguins vs Rangers Game 2 odds, as we break down our best pick for this Metropolitan NHL Playoff battle.

New York online sports betting markets are listing the Rangers at +175 to win by 2 goals or more. However, since Pittsburgh won Game 1, they’re priced at a juicy -210 to lose by one goal.

The BetMGM Ontario app is now available for Canadian users. It is available in the Google Play Store and App Store for download today and will surely have NHL Playoff odds ready to go for hockey fans.

The Rangers had an early lead against the Penguins in Game 1 going up 2-0 in the second period. However, Pittsburgh started to turn it up a notch and ended up making it a 3-3 game before the end of the 2nd. The top candidate for the Vezina Trophy, Igor Shesterkin, played out of his mind. He finished with 79 saves on 83 shots.

To be honest, the Penguins ended up dominating the Rangers in the stats department. Pittsburgh led the game in Corsi %, xGoals %, and High Danger Chances.

What a way to make your #StanleyCupPlayoffs debut @TheGarden. ✨ pic.twitter.com/jYk2B6MHjy

The one area where the Rangers did have the upper hand was between the pipes, they just need to offer more defensive support next game. Igor leads all playoff goaltenders with a Goals Saved Above Expected rate of 3.6. Shesterkin is the reason why New York is listed as home favorites in the Penguins vs Rangers Game 2 odds even after being outplayed.

This does set up for a nice bounceback spot for the Rangers in my opinion. They are at home again, which is a huge advantage in NHL Playoff hockey. More importantly, they are 21-9 in their last 30 games as a home favorite.

Are the Penguins Due for Offensive Regression?

Winning back-to-back playoff games on the road is not an easy task, especially as shorthanded at goalie as Pittsburgh is. Casey DeSmith left in overtime due to an injury, forcing third-string goaltender Louis Domingue to come in. Both DeSmith and Rakell are listed as day-to-day as they both missed practice on Tuesday.

If Louis Domingue starts for the Penguins, expect the Penguins vs Rangers Game 2 odds to shift quite heavily.

Domingue has now played a total of 35 minutes in his NHL Playoff career and has not let in a single goal. However, I don’t think Domingue will see another 3 or 4 goal performance from his offense.

The Penguins have the highest xGoals % and Expected Goals For rate in the playoffs after Game 1. However, this number is heavily skewed because they played almost three full extra periods. The Penguins’ regular season xGoals % was 53.47, which is a 12% difference from their Game 1 number in the same category. I expect a little bit of offensive regression here as they go up against a Rangers team that’s allowing only 2.17 goals per game.

I think it’s pretty clear where my Penguins vs Rangers Game 2 pick lies here. I’ll be taking New York to win in regulation.

Igor Shesterkin has now allowed 4+ goals seven times this year after Tuesday night’s showdown with Pittsburgh. In his next start after giving up 4+, the Rangers are 5-1 with a +12 goal differential this season. The Penguins are also 1-4 in their last five trips to MSG, I think this team will have a lot less gas in the tank than New York will in Game 2.

BetRivers Ontario is offering the best price on the Rangers to win in regulation at +110 in the Penguins vs Rangers Game 2 odds.