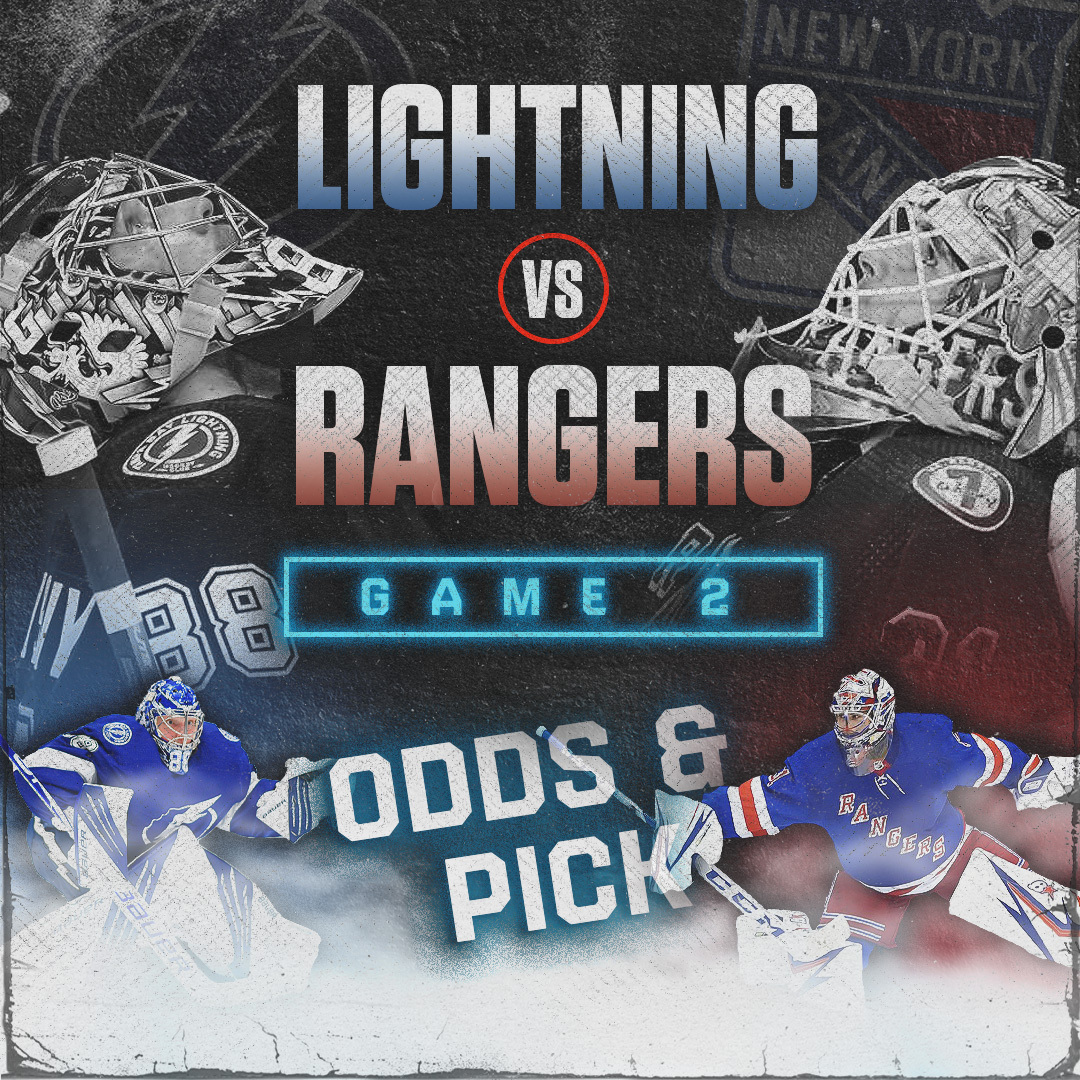 With two of the best goalies in the NHL, Game 1 of the Eastern Conference Finals between the New York Rangers and Tampa Bay Lightning did not go as expected. Despite the result, the Lightning vs Rangers Game 2 odds aren’t all that different from Game 1. Madison Square Garden is the location for the matchup, with an 8 PM EST puck drop on June 2nd, 2022. The almighty Andrei Vasilevskiy NHL Playoff trend is back as the Lightning are coming off a loss heading into Game 2. The Russian netminder owns a 17-0 record, 1.47 GAA, .942 SV%, and five shutouts following a playoff loss since 2020. Let’s take a look at the Lightning vs Rangers odds at BetMGM as I break down why I believe the Lightning will knot up the series as they roll back to sunny Tampa, Florida.

With the Rangers winning by four in Game 1, New York online sports betting markets list the Rangers to win by two or more at +240.

Igor Shesterkin clearly outplayed Andrei Vasilevskiy in the Lightning vs Rangers Game 1 matchup. After posting a 0.75 GAA and .981 SV% against the Panthers in their Eastern Conference Semifinal series, Vasilevskiy let in six goals at MSG on Wednesday night.

In Game 1, Igor stood on his head yet again for his squad posting a 2.45 Goals Saved Above Expected rate. Meanwhile, the Rangers didn’t have too many high danger chances but did they ever capitalize when they did. Vasilevskiy posted a -3.52 Goals Saved Above Expected rate, which is his worst of the postseason. The Lightning have been great following a loss this postseason. Tampa Bay hasn’t lost back-to-back NHL Playoff games since 2019, going 16-0 after a loss. Could be the reason why we are seeing Tampa Bay as road favorites in the Lightning vs Rangers Game 2 odds.

Did the Rangers Actually Outplay the Bolts in Game 1?

Although the Rangers won by a substantial margin in Game 1, looking at the numbers makes you think if New York can win three more games in this fashion. Lightning outshot the Rangers 39-34. More to that point, New York didn’t log a single high danger shot on Vasilevskiy, which demonstrates how poorly of a game he played.

The Lightning’s Expected Goal Rate was 4.45, while the Rangers posted 2.48 in Game 1. Tampa generated eight high danger shot attempts, so the volume was there they just ran into a brick wall. With their playoff experience, I have a strong inclination that they’re bouncing back.

I’m going to follow the Vasilevskiy trend and bank on the fact that Igor can’t stop every single puck going his way in Game 2. I’m taking Tampa Bay ML and -1.5 at BetMGM. The Lightning outplayed the Rangers in their first matchup and I’m confident they’ll do it again behind a much better goaltender in Game 2. The Rangers have also won the last four meetings, so I believe something has to give here because it’s hard to beat the back-to-back defending champs five straight times. Ontario online sports betting markets have Lightning vs Rangers odds. Be sure to check out BetMGM Ontario and other online sportsbooks for the best lines available.