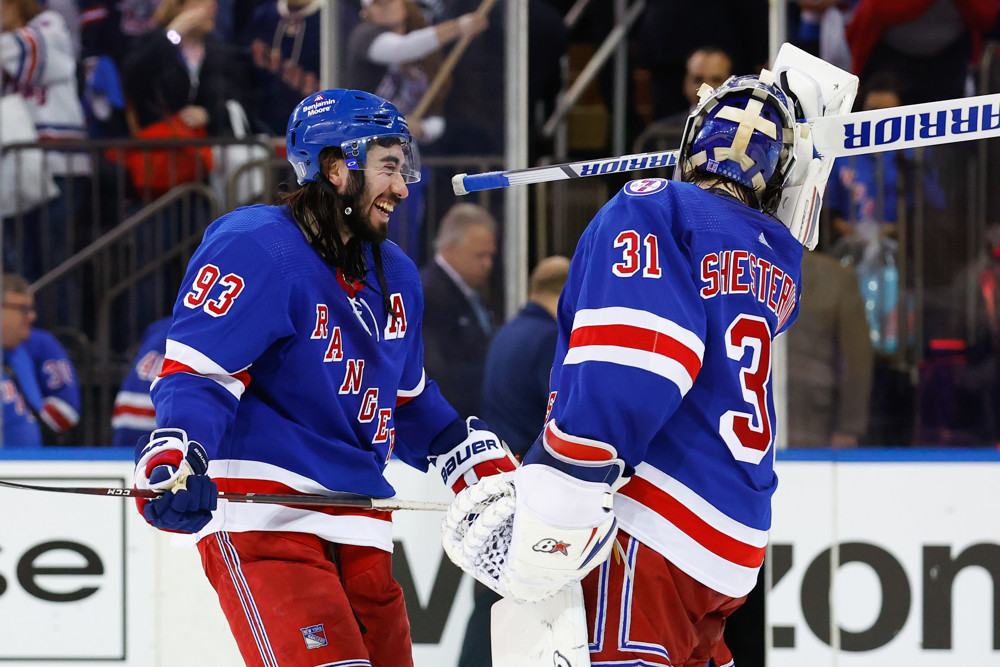 The Eastern Conference Finals are set and it features two teams that share 7 ECF appearances in the last 8 seasons. Including a 2015 meeting of the two teams that saw New York advance to the Stanley Cup Final. The 2022 updated Stanley Cup odds favor Tampa Bay to advance this time around though. We’ll look at how to attack the Lightning vs Rangers game 1 odds throughout this article.

Tampa Bay comes into this series with plenty of rest, having not played since their 4-0 sweep of Florida on May 23rd. Meanwhile the Rangers have endured another hard fought 7 game series. This will mark their 15th in game in the last 28 days.

Even with history of their side, the Rangers still find themselves as home underdogs in the New York sports betting markets. Gerard Gallant’s group is 6-1 in these playoffs at Madison Square Garden and haven’t lost since game 1 of the Penguins series. You can back the Rangers to win game 1 in regulation at Caesars Sportsbook with odds of +145.

The back-to-back Stanley Cup Champions find themselves in an advantageous position to make their third straight trip to the Stanley Cup Finals. Andre Vasilevskiy put on a performance for the ages in round 2, allowing just three goals across four games against a Florida team that led the NHL goals per game.

But with a formidable goaltender on the other side in Igor Shesterkin, putting the puck in the back of the net will be as tough as it’s been all postseason. It seems as though the Bolts will be tasked with doing it against Brayden Point as well. Jon Cooper has been pretty mum on his status, calling him day-to-day, but he seems to still be quite far away from a return.

No Brayden Point to start practice

As much as goaltending is the story in this series, I see Steven Stamkos as the X-factor. If he doesn’t elevate his play without Point as his running mate then the Rangers have a real chance here. Stamkos has just 9 points in 11 games, which in the grand scheme of things isn’t horrible, but not up to snuff for a 106-point player in the regular season.

Are the Rangers Being Disrespected?

New York got off to a rough start to the 2022 NHL Playoffs, but after winning back-to-back game 7’s, one on the road against a team that was 7-0 at home in the postseason, they’re battle tested. A lot of that comes back to their star goaltender, who’s authored a .928 SV% and 2.68 GAA while facing over 37 shots a night.

Where the Rangers can really separate themselves in this series is their second forward unit. Artemi Panarin has come up with some clutch moments but his play hasn’t been as consistent as hoped for. The trio of Panarin, Ryan Strome and Andrew Copp are well suited to outplay the Lightnings second line of Palat-Cirelli-Killorn. Cirelli has yet to be on the ice for five-on-five goal these playoffs.

With such high quality goaltending in this series the special teams could be an important decider in the game 1 betting odds. The Rangers pair their Vezina candidate goaltender with the a power-play clicking at 32.5%. Relying on goaltending and the man advantage isn’t the most reliable formula but it’s paid dividends up to this point for New York.

There are few things I enjoy more in sports betting then a good betting trend. The historical record of teams coming off 4-0 sweeps against teams winning game 7 is not good. I looked a little deeper at how those series openers tend to play. They’re 5-1 to the under as well, averaging just 4.5 goals per game. The Lightning vs Rangers game 1 odds list the total at 5.5 goals.

With two of the best goaltenders in the sport right now, I’d expect this game to continue to be low scoring and tightly checked. The Point absence wasn’t quite the deal I imagined it being in the conference semi-final, but with goals being at a premium here the Lightning will feel it.

The Rangers have too much value as home underdogs to pass up on. In an expected low scoring game I’m riding with the team that pays me at plus money.