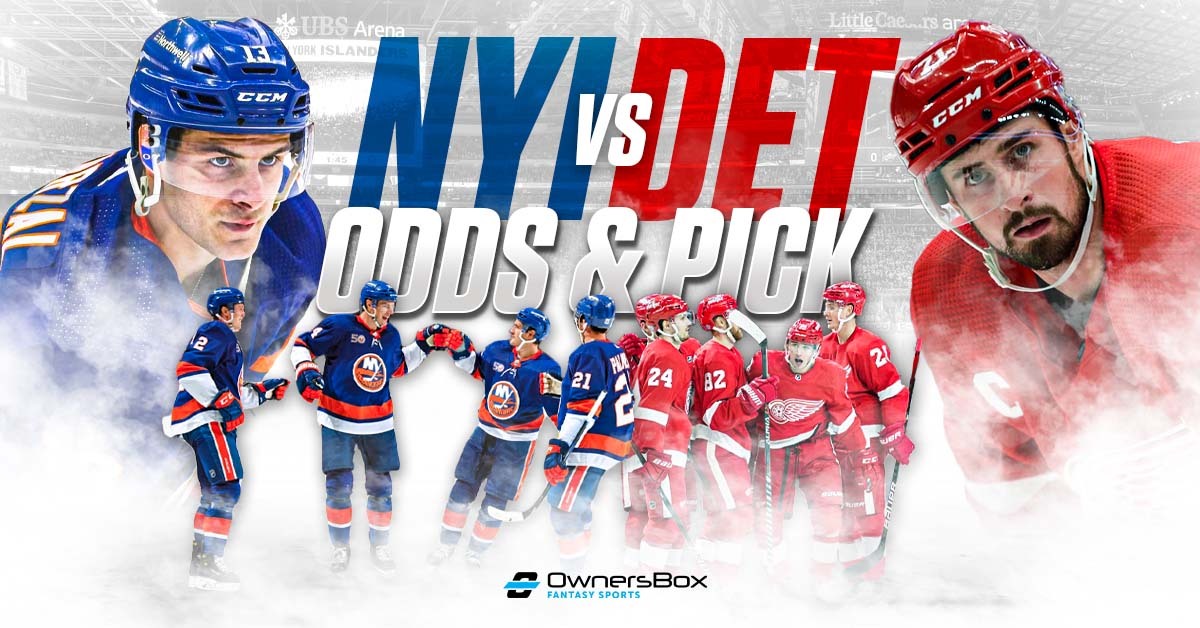 The Saturday NHL slate starts early with the New York Islanders heading to Detroit, Michigan to take on the Red Wings. Puck drop is set for 1 PM EST on November 5th, 2022. New York sports betting markets list the road team as short favorites in the Islanders vs Red Wings odds at DraftKings Sportsbook.

Let’s take a look at the Islanders vs Red Wings odds on Saturday afternoon as we break down our best NHL betting pick.

Odds as of November 4 at DraftKings

New users who sign-up at DraftKings Sportsbook can get up to $1,050 in bonuses for Islanders vs Red Wings. Click the banner below to get started!

The Islanders, along with the Bruins, have been one of the hottest teams in the NHL. They’ve won five straight, three of them as underdogs, and are scoring at a decently high rate for what is generally a pretty stale offensive attack.

Of course, they’re relying on Ilya Sorokin like in years past, but they have been able to drive teams home and execute comeback wins. They knocked off the Avalanche after being down 3-0 at one point in the game.

BEAUVILLIER GIVES US THE 4-3 LEAD.

4 UNANSWERED GOALS FOR THE ISLES. pic.twitter.com/I9knRxTXWG

Sorokin is having another Vezina-caliber season posting a 2.03 GAA, .936 SV%, and 8.0 Goals Saved Above Expected. Not too many people pegged the New York Islanders as contenders in the Metropolitan Division, but they’ve been able to hold their own thus far.

If Nedeljkovic gets the start for Detroit considering the Red Wings are playing back-to-back Saturday-Sunday, I think the Isles will be able to feast.

There’s a similarity between the teams the Red Wings have beaten and lost to. The teams they’ve beaten – Canadiens, Ducks, Wild, Capitals – all rank in the bottom 12 in Expected Goals For per 60. So, in other words, teams that don’t generate a ton of chances.

However, the teams they’ve lost to – Kings, Devils, Bruins, Sabres – all rank in the top 12 in Expected Goals For per 60, except for the Sabres but their powerplay has been lethal. They struggle when their defense really gets tested by strong offensive units.

The Islanders are seventh in the NHL in Expected Goals For per 60 at 5-on-5 at 2.92. So, it really shouldn’t be a surprise to see Detroit listed as underdogs in the Islanders vs Red Wings odds.

I would not have predicted this unit to be so solid, but they are. Lane Lambert has whipped this crew into shape.

It’s tough for me not to like New York here at -125 in the Islanders vs Red Wings odds. Even though the home team has won five straight in this series, the Islanders have won eight of the last 11.

The Islanders also have a full bill of health, while the Red Wings continue to miss Vrana, Bertuzzi, Fabbri, and potentially Sundqvist.

The goalie matchup is in clear favor of New York as well, and it’s hard to ignore this offense.