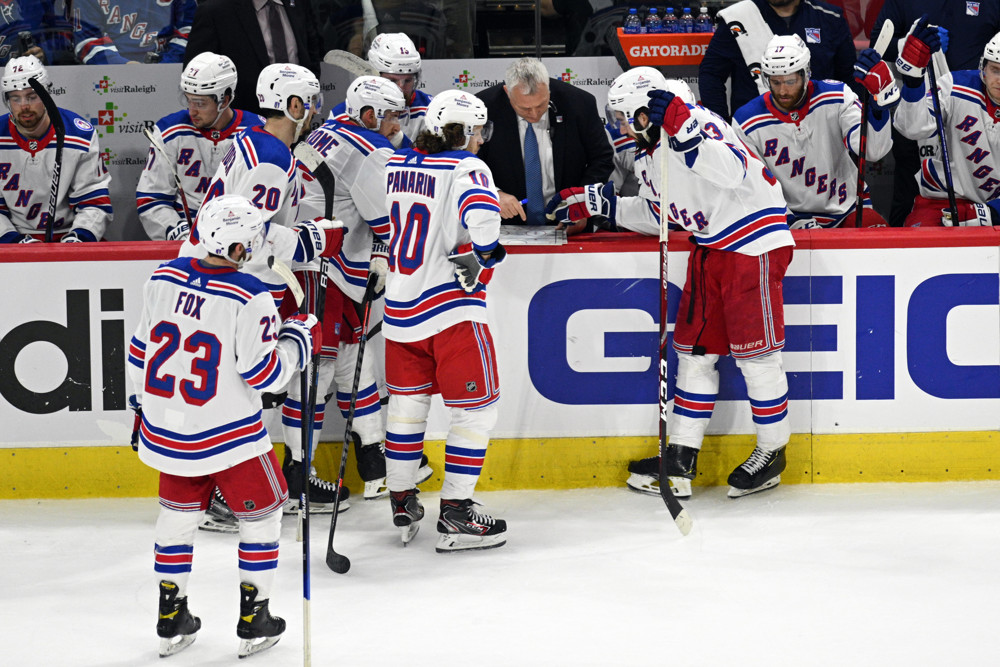 RALEIGH, NC – MAY 26: The New York Rangers take a timeout during the final minutes of game 5 of the second round of the Stanley Cup Playoffs between the New York Rangers and the Carolina Hurricanes on May 26, 2022 at PNC Arena in Raleigh, North Carolina. (Photo by Katherine Gawlik/Icon Sportswire)

This series has nearly been a mirror image of the Hurricanes vs Bruins round 1 matchup up to this point. Carolina won both games at home and then New York did the same to even the series at two games a piece and now the Hurricanes have won again at home to take a 3-2 series lead. As we head back to New York for Game 6 in Madison Square Garden Arena, we patiently wait to see if there will be a Game 7 back in Carolina. If Carolina wants to simply copy and paste their first round matchup into the second round then we could see a win for New York Saturday night.

It appears as though the sportsbooks have begun to catch on to this streak that the Carolina Hurricanes have going and it’s not the type of streak you want the public to notice. As we all know by now the Hurricanes still haven’t won on the road in the playoffs and the odds are now reflecting that for this Game 6 matchup. Heading into this game the Rangers are slight favourites; however, it is very narrow and is still essentially a pick‘em Anyways, let’s take a look at the odds that we are being offered for this key matchup.

Despite the Rangers being favourites in this game, the odds of both teams winning are almost identical so there isn’t one team that presents a lot of upside in terms of the amount of return that is available and  neither team presents the opportunity for + money. Because of  the odds being so even for the moneyline aspect of this game, the puckline  and the Under 5 both look to be very intriguing.

Through five games in this series there hasn’t been a game where there has been more than five goals scored as the Rangers had the largest victory in Game 4 with a 4-1 win. Furthermore, in all of the games except for one the winning team has won by 2 or 3 goals. Considering the lack of scoring and the close games this suggests that the goaltending will continue to be exceptional in Game 6.

Both goalies on either side of the ice have been two of the best in the entire playoffs. In this series Raanta has a .940 save percentage and a 1.62 goals against average and Shesterkin posts similar numbers with a .946 save percentage and a 1.62 goals against average. Due to this exceptional level of goaltending it is expected that not many players are going to be able to find the back of the net, which suggests that the winning margin might not be more than 2 or 3 goals, with the potential for an empty net goal.

The energy at Madison Square Garden is electric and it can’t be ignored when evaluating this series. The effect of playing at home is seen throughout the Rangers lineup as their entire team plays better. And for this Rangers team it starts in the net with Igor Shesterkin as he has been their backbone all season long and I wouldn’t expect anything different in this game.

With New York’s back against the wall again in these playoffs they are going to come to play and force a Game 7 back in Carolina, where they will have to overcome the Storm Surge in PNC Arena. Thankfully, the storm seems to die down to sun showers with a gust of wind every once in a while when it’s on the road, as the Hurricanes haven’t been able to put anything together when they are the away team. Shesterkin will likely play a key role in helping kill the storm as he has played exceptional at home this season posting a .940 save percentage and a 1.85 goals against average.

However, despite the ridiculous numbers that Shesterkin has and his ability to bring his game to another level when at home, the Rangers can’t continue to expect him to steal game after game for them.

Igor Shesterkin's 43-save performance powers the @NYRangers to victory and helps cut the series lead to 2-1! #StanleyCup pic.twitter.com/07vOSfix6X

If the Rangers want to win tonight they will have to get their star players into the game early. This means ensuring that the Zibanejad line and Panarin line gets into the game early as they will be instrumental in the Rangers winning Game 6. After the trade deadline acquisitions made by the Rangers they began to string a number of wins together, courtesy of the strong goaltending and the new addition Andrew Copp, who plays with Panarin.

In his 16 games with the Rangers during the regular season Copp had 18 points (8 goals and 10 assists). And in the playoffs Copp has also been key as he has had 10 points (5 goals and 5 assists) in 12 games. If the Rangers want to extend their season and push the Hurricanes to Game 7 it is critical that they get the Panarin line going. With New York at home I think this will give them the extra boost they need and I expect a textbook game from the Panarin line, so I would make sure to keep an eye on them. There is high potential for Panarin to set up Copp at some point in this game. Even if the Rangers get their best players going offensive, Raanta and the tight checking style of play that the Hurricanes have will make sure that it is a low scoring game.

The Rangers have some younger talent on their team as they are led by their 26 year old goaltender, but that hasn’t stopped them from playing their best hockey with their backs against the wall. The Rangers are facing elimination for the 4th time already in this playoffs and they have managed to scratch and claw their way to Game 6 of the second round. With the confidence and the level of comfortability they have playing in ‘do or die’ games I expect them to pull out a close one on Saturday night.

Going back to Madison Square Garden for Game 6, the Rangers might as well keep their bags packed because they’ll be going right back to Carolina for Game 7. In all of the Rangers wins this playoffs they have except one they have won by two or more goals. With Shesterkin in net at home, I don’t expect many goals for the Hurricanes and the Rangers offense should be able to feed off the energy of the home crowd.

Furthermore, with the great goaltending and the level of attention to details that the Hurricanes have defensively, this could set up for a low scoring game. Because of this I think the best bets are to pick the Rangers -1.5 at +225 odds and the Under 5 at +120.