Okay, so I changed my mind it’s going to be Habs in 6! The ship for Habs in 5 has sailed, but I am nowhere near giving up hope on the boys. They were the underdogs coming into this series and it was a teeny tiny overtime goal and some horrific reffing, that stopped them from taking the series 3-1. That being said, it’s not over yet and I have a good feeling about game 5 tonight.

First of all, huge red flags were raised after game 4 regarding reffing. They should be checking their voicemail this evening because they for SURE missed a few calls. Not to be biased BUT, they were mainly calls they overlooked against Montreal which is where most of the complaints were coming from online. They made some questionable calls, including calling a joke of a hooking on Suzuki, and missed some big moments as well like when McNabb suckered Suzuki right in the face about 1 meter from the ref. The only explanation for how the ref managed to miss that is a really long blink but with that pretty low on the probability line, I’m gonna go with- he just straight up ignored it. Like hello, why can’t we cancel NHL refs like we cancel TikTok stars, that doesn’t seem fair. 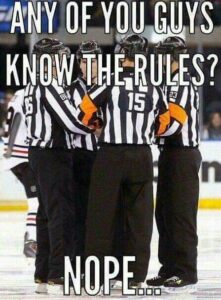 IS THE FLOWER BACK?

The most recent update is, yes- and the fans are loving it. I definitely think that is a good choice for Vegas since this game could give them the series lead. However, Lehner definitely held it down between the pipes last game. I just think it makes sense to play the goalie that got you to the playoffs, in an important playoff game. Especially now that he got the chance to rest and get his head back on straight.

Some may say this is bad news for the Habs but, they’ve beaten him in the net twice this series, so who is to say he won’t choke again. WE just need shots, shots, and more shots. You know what they say, you cant score if you don’t shoot!!

SO basically, with better reffing, more shots, and of course the amazing Price in the net, I’m positive the Habs have this one in the bag.