I mean, I wasn’t alive in 93′ but I have what I assume is that 93′ feeling, and since no one else in the office is a Habs fan, here I am again pouring my excitement out into this blog.

With an amazing 4-1 win my spirits are high and come tomorrow night, the boys are going to be riding this win right into the Stanley Cup finals.

Alright, let’s talk about last night, 4-1 with an empty netter as the cherry on top. I have to say, both goalies played an amazing game, with some incredible saves and the two teams are very fortunate to have such talent between the pipes.

What I found interesting was how each Habs goal actually reminded me of the exact things my coaches used to say to us on the bench.

The Habs kicked it off with a beauty of a rebound goal by Kotkaniemi, proving to every young hockey player, including myself exactly why my coach always told us to “crash the net”. He followed the play all the way until the end and it pays off every time, burying those loose pucks. 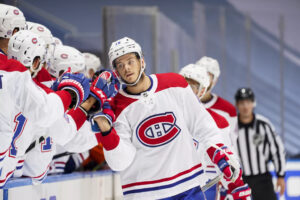 The second goal came from Stall roofing a centering pass from Suzuki. All I could think was thank god he had his stick down in front, I can’t even count the times growing up that I heard my dad yelling, “STICK DOWN” at me when I was planted in front of the net. Of course, Eric Stall is not going to forget to put his stick down, he definitely doesn’t even have to think about that anymore! A young 8 year old me on the other hand, she definitely missed a few scoring chances.

The third goal for the Habs came from Caufield, who’s had an amazing first playoff season this year, proving that size really doesn’t matter, especially on the wing. He’s definitely got a quick release on his shot, as he snuck one in right over Fleury’s glove. I wonder how many one-timers he shoots per practice. Probably like a million because it seems like he has it down to a science. 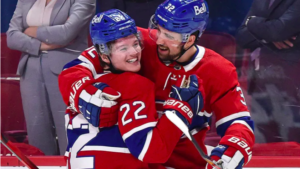 The Habs finished the game off with an empty netter, and I love that for them. It’s so satisfying to just know the puck is going in when a player is approaching an empty net. It makes me wonder why people even pull the goalie anymore, I’ve almost never seen it actually work. Don’t get me wrong it can, but after googling the chances, I found it only works for the team that pulls, around 17% of the time.

Overall, above all the scoring chances and great saves Montreal had, the best part of the game was when the Vegas crowd booed their own team. I love a good home crowd boo, don’t you?

Can’t wait to write my “Habs won the series” article!! See you next time!