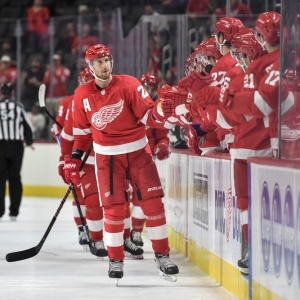 The Detroit Red Wings are looking to build for the future and GM Steve Yzerman has done a fantastic job so far. The Anthony Mantha deal was masterful so I’m excited to see what he does leading up to the expansion draft on July 21st. For those of you that don’t know, here are the expansion rules:

Dylan Larkin – Is Larkin a player that will carry play on a top line that wins the Stanley Cup? I’m not sure. But at just $6.1 million a season he doesn’t necessarily need to do that. His next contract in 2023-24 should be interesting.

Jakub Vrana – The big fish from the Mantha trade. I think Vrana has some high level upside with more ice time and opportunity.

Tyler Bertuzzi – This may be bias as I am a big Guelph Storm guy but I think Tyler Bertuzzi is the type of player you NEED to have if you’re going to win a Stanley Cup.

Robby Fabbri – Another former Storm that I really enjoy to watch play. I’m worried for this guy as he’s never been the same since his ACL tear. He needs to prove he can handle an 82 game schedule or else his career in the NHL may not last. At 25 years old he’s the perfect player that the Wings can work on developing.

Michael Rasmussen – This is where there is a drop off in the quality of players. As a first round pick that is only 22 years old the team is certainly not going to give up on him, that’s why he’s on this list. He needs to earn consistent time in the lineup in 2021.

Adame Erne – Yzerman brought in Erne in 2019 and he’s enjoyed his versatility in the lineup. “He’s a big, thick kid who’s got pretty good hands and can play a lot of different situations” says Yzerman. Even as an RFA and 26 years old he’s got a solid CF% (49.6) relative to the Wings average (45.3%) so I think Yzerman keeps him around.

Vladislav Namestnikov – This was the final player to make the list. Namestnikov is a solid middle six option for a playoff team and can play at any forward position. He could be a nice trade piece in 2021.

Filip Hronek – An easy choice here, he’s been playing over 23 minutes a night for the Wings.

Denis Cholowski – This is another situation where youth takes a factor. Cholowski is a 1st round pick from 2016 that requires more time in order to see what he’s capable of at the NHL level.

Gustav Lindstrom – Even though he has second round pedigree he’s looking like he may be a better NHL pro then Cholowski. He has control as a 22 year old and I feel as if the organization will really value their youth.

Thomas Greiss – He’s the only NHL capable goaltender eligible for expansion so this is a no brainer.

A quick note on these defensemen that are available… Dekeyser is 31 years old and saw a decent dip in minutes last season and his contract is up at the end of the coming season. For Stetcher my thought process is that he will likely explore free agency after next season and I’m not sure the organization will commit to keeping him unless they know his intentions for his next contract.