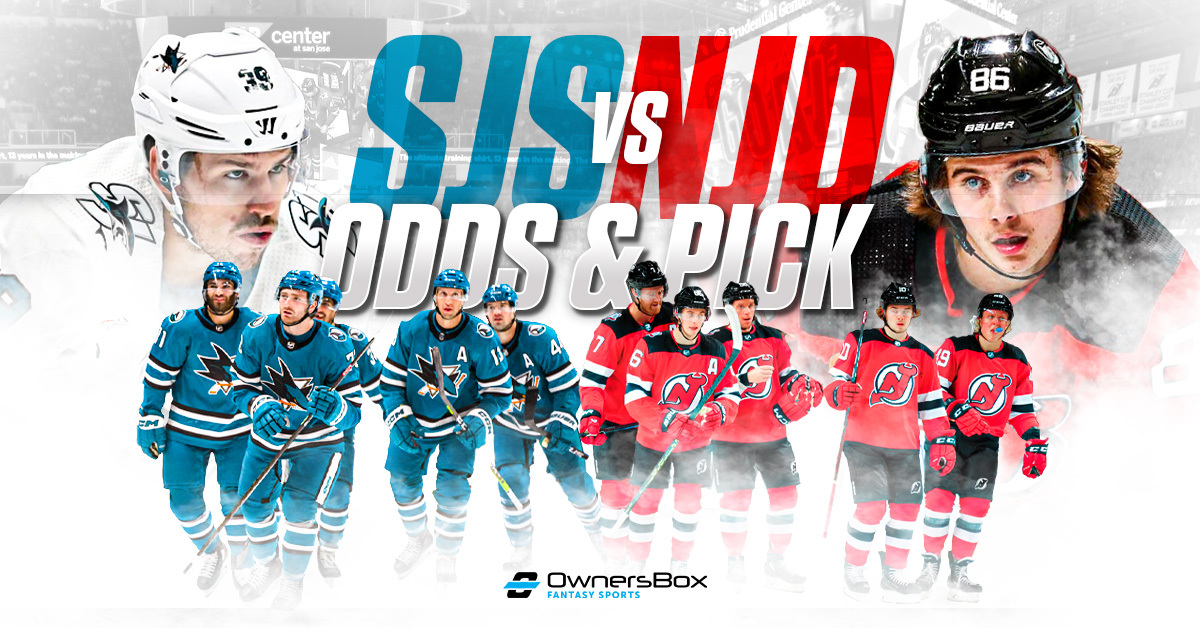 The New Jersey Devils will be hosting the San Jose Sharks at 1 PM EST this Saturday, October 22nd to kick off a day full of hockey. Both teams are off to a slow start as San Jose is already 1-5-0 and the Devils are 2-2-0, and while the Sharks were planning on tanking for Connor Bedard this year, the New Jersey Devils were hoping to at least compete for a spot in the playoffs. New Jersey are massive favorites in the Sharks vs Devils odds.

Will the Devils be able to figure out their troubles against one of the worst teams in the NHL? Is it worth betting on Jack Hughes and company to come alive against a bad San Jose squad? Let’s take a look at the NHL odds offered by BetMGM to get a better idea of how this matchup is being evaluated.

Use the BetMGM bonus code ‘OWNERSBOX’ to get a $1,000 risk-free bet for Sharks vs Devils.

New Jersey sports betting markets list the Devils to win by two or more at +140. New Jersey wasn’t on anybody’s radar in the Stanley Cup odds before the season, but they are currently listed at +6600.

There’s no doubt San Jose are underdogs in Sharks vs Devils odds as their organization is in a rebuild phase and will likely be one of the bottom feeders of the NHL for the entire season.

Four of those five teams are likely teams who could contend for a playoff spot this year. And in none of these matchups have the Sharks shown much prowess offensively or defensively as they’re averaging 1.83 goals per game and 3.5 goals against.

However, they showed a glimmer of hope in their last game against the Rangers as they narrowly pulled out a 3-2 overtime win. This game saw their star players get in the action early and often as they got goals from both Couture and Karlsson.

EK65 WITH THE GAME WINNING GOAL IN OT🚨 pic.twitter.com/rnlDLlyMfR

In this matchup the Sharks will be playing a Devils team that has been struggling between the pipes for the last several years. A game like this gives San Jose’s offense a chance to get hot and it all starts with their star players Couture, Hertl, Meier, and Karlsson, who have all been fairly quiet to start the season; however, in recent games they have shown promise as they led the Sharks to an upset win against the Rangers.

If the Sharks are able to replicate the performance they had against the Rangers then they could have a chance against the red hot Devils. Once again their star players will need to draw blood early and continue to apply pressure.

While there is always a chance for an upset, the Sharks haven’t been great on the road this year as they are 1-2-0 and have almost been outscored by double in those games. New Jersey is also beginning to get hot as they are starting to turn their season around as both their young guns and goalies may slowly be finding their game.

New Jersey are the heavy favorites in the Sharks vs Devils odds in this matchup for a reason. However, if you are set on betting the Sharks in this match I would recommend betting on them to cover the +1.5 spread because their offense is gaining confidence and could take advantage of the shaky goaltending of the Devils, which could make it a close game. San Jose has also been 3-3 against the spread this year, so there is promise behind that bet.

The New Jersey Devils are coming into this matchup looking to add on to their current two game win streak as they have bounced back from the two losses they suffered to start the season. Once again the Devils dominated play, which has been a trend early in the season for New Jersey as they more than doubled the Islanders shot total.

This resulted in a 4-1 win, where the Devils top two lines got in the action as goals came from Hughes, Hischier, and Palat. With this matchup against the Sharks, the Devils look to add to their winning streak and move to 3-2-0, which would be their first winning record of the season.

While this wasn’t the start to the season that New Jersey had envisioned, their record doesn’t tell the whole story as this team has played solid in their first four games. In their losses to Philadelphia and Detroit, the Devils had a combination of their own poor goaltending with the opposing team’s goalie standing on their head.

This saw New Jersey score four goals on 76 shots, which is equivalent to a .947 save percentage; while, the opposing teams scored 10 goals on 46 shots (.782 save percentage) in those games. It doesn’t look like this will be the norm for the Devils going forward, so I’d expect the Devils’ young guns to catch fire and the hockey gods to pass on some more puck luck.

Moreover, expect their goalies to make a couple more saves as the defense hasn’t been terrible for the Devils; rather, bad luck has been a major contributor. In their two wins this season they have more than doubled their opponents shots as they’ve had 83 shots on net while only allowing 37 shots. This has resulted in the Devils scoring eight goals and only allowing three over those two games.

NEW PERK: The Team Stats dashboard is now up and running.

It'll update every morning, but if you're a Penguins fan you might want to just enjoy it how it is right now… pic.twitter.com/vuEsNORWcT

The advanced statistics indicate more of the same for the Devils as they lead the league in xGoals% (70.95%) and Expected Goals For (12.04), while being only second in Expected Goals Against (4.93). This young Devils team may finally be figuring it out after being in turmoil for the past few years, so don’t be surprised if they begin to turn some heads this year as they battle for a playoff spot in the stacked Metropolitan Division.

Last season the Devils and Sharks split the season series one a piece but in both of those games there was five or more goals scored. This was likely a result of poor defense/goaltending as last season both teams gave up a lot of goals as the Sharks had a goals against average of 3.18, while the Devils were even worse allowing 3.68 goals per game.

This suggests that there could be more of the same on Saturday afternoon, considering the goaltending of both teams are still shaky.

I also like New Jersey moneyline as they are the clear favorites in the Sharks vs Devils odds and there isn’t much the Sharks have done to suggest an upset here. The Devils have the advantage in all areas of the ice as both offensively and defensively they are superior.

Furthermore, New Jersey is beginning to get into a rhythm as they have already strung together two wins and are looking poised to go on a run if they can finally get some puck luck. The Devils are bound to break out, announcing themselves as a team to watch out for going forward and what better way to put the league on notice than lighting up the worst team in the NHL.