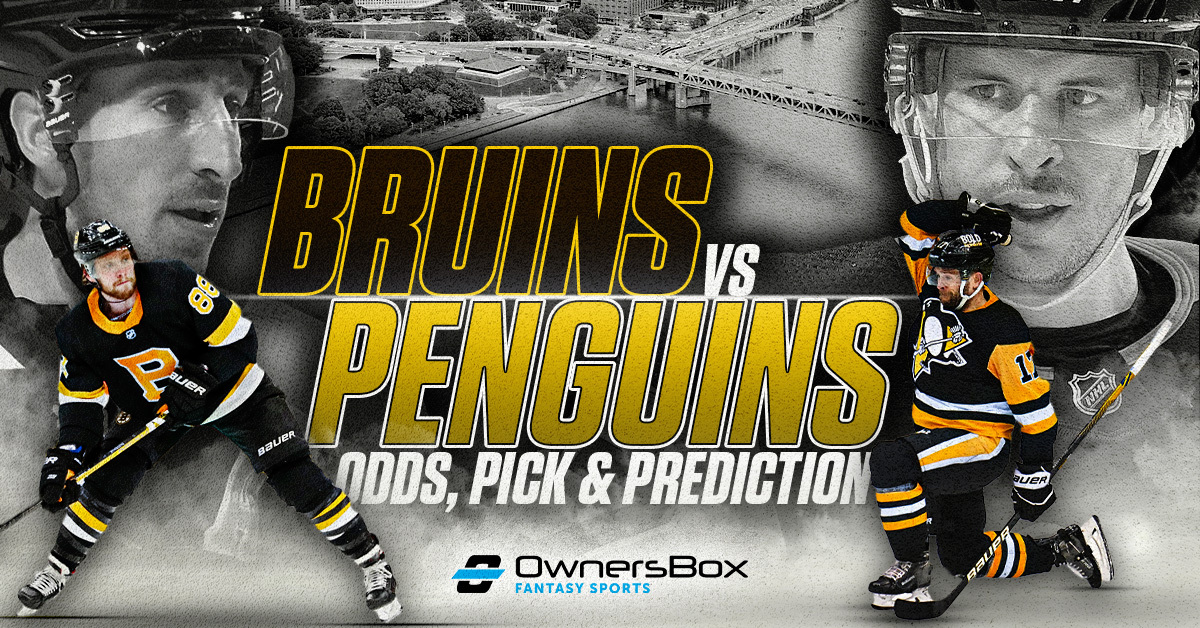 The NHL season is now in full swing as we wrap up Halloween festivities and move into November. And there’s no better start to a month than a night full of hockey with a matchup between two Metropolitan Division heavyweights. The Pittsburgh Penguins will be looking to snap their losing streak as they host the red hot Boston Bruins. Pittsburgh are listed as home favorites in the Bruins vs Penguins odds.

Let’s take a look at the odds offered by BetMGM to give us some betting insight when we make our pick for this game.

Use the BetMGM bonus code ‘OWNERSBOX‘ to unlock a $1,000 risk-free bet for Bruins vs Penguins.

The BetMGM bonus code is available in Pennsylvania betting markets. Massachusetts sports betting apps will be available sometime in early 2023.

The Boston Bruins are the best team in the NHL right now as they lead the league with their 8-1-0 record. With David Krejci back in the mix for the Bruins they are playing like the team that went to the Stanley Cup Finals in 2019.

This could be the Bruins last run at the Stanley Cup with this core as Bergeron and Krejci are both on one-year deals and could retire after this season, which makes for a dangerous team as there may not be a “next year”.

As of right now, Ullmark is expected to start between the pipes for the Bruins and he is currently sporting a 1.70 GAA and .945 SV%, which are both among the top five in the league and not to mention he leads the league with six wins so far.

Marchand has also recently returned to action for the Bruins, which will be a massive addition to an already amazing Boston squad. The Bruins currently lead the league in goals for per game (4.22) and are tied for second in goals allowed per game (2.33).

With the addition of Marchand, we can only expect the Bruins to improve overall as Marchand is a huge contributor on both sides of the puck. With that being said, there’s nothing to indicate the Bruins are going to slow down anytime soon, but sometimes all it takes is one bounce and you can find yourself behind the eight ball.

It’s surprising to see Pittsburgh favored in this Bruins vs Penguins odds, regardless if they are on the road.

In the offseason, Pittsburgh was also able to resign Malkin and Letang to keep their core together as they look to capture their fourth cup. In similar fashion to the Bruins, the Penguins also came out of the gates running as they started the season 4-0-1, but they have dropped their last four games and are now 4-4-1.

However recently the Penguins have been playing well against the Bruins as in the 2021-22 season the Penguins were 2-1-0, averaging 3 goals for and 1.33 goals against. It’s important to note that home ice could be a major factor in this game as the Penguins remain undefeated at home, while the Bruins only loss has come on the road.

The Penguins are a much better team than their last four games have indicated. They just wrapped up their road trip and have returned home to host the Bruins, where they have played much better this season.

Jarry is expected to get the start and he’s been the better of the two Penguins goalies, with his 4-2-0 record. Expect the Penguins to play with a different type of fire as they look to get back in the winning column and remind everyone that they are a contender this year.

The Bruins have an all-time record of 8-11-2 when playing in the Pittsburgh’s PPG Paints Arena and in those games, they are allowing 3 goals per game.

It’s unrealistic to assume Ullmark will be able to maintain this level of play and with the Penguins high powered offense looking to get back on track Pittsburgh has a good chance to take down the Bruins. That’s why I’m rolling with Pittsburgh ML at -115 in the Bruins vs Penguins odds.

Crosby and the Penguins will be hungry to win this game and while Jarry has been solid we have only seen a glimpse of what his best hockey looks like. I’m expecting a big performance from Jarry and Pittsburgh’s offense to come back to life as they put on a show for the home crowd.