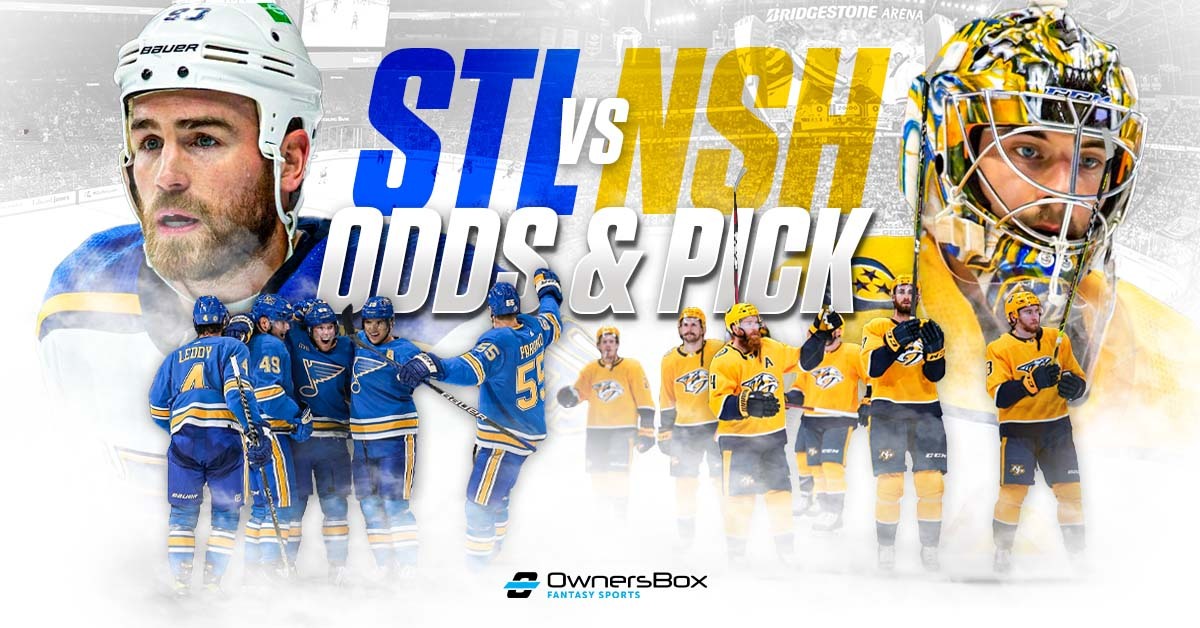 Week 3 of the NHL and we are in for a MASSIVE season. We’ve got a great Western Conference matchup on Thursday, October 27th, 2022 at Bridgestone Arena. Nashville is listed as home favorites in the Blues vs Predators odds. The Predators are 1-6 ATS to start the season and have loss five straight.

Let’s take a look at the Blues vs Predators odds at BetMGM as we break down our best NHL betting pick.

Odds as of October 26 at BetMGM bonus code

Tennessee sports betting markets list the Predators on the puckline at +160 in the Thursday NHL odds.

New users who sign-up with the BetMGM bonus code ‘OWNERSBOX‘ can get a risk-free bet of up to $1,000 for Blues vs Predators.

The Blues coming off a loss against the Oilers and now have to take on Nashville. One good thing to note, St. Louis are 4-0 in their last four back-to-back situations and 7-2 in their last nine in the fourth game of a 4-in-6 situation.

This Blues team has not been all that impressive. However, Jordan Binnington has been a stud with just one loss. We’ll most likely see Thomas Greiss for the Blues since Binner started against Edmonton last night.

Greiss is 0-1 with a 3.02 GAA and .929 SV% this season, with his lone loss coming against the Jets. They haven’t been much a threat with an Expected Goals For per 60 of 2.01, which is third last in the NHL only better than

It’s tough for me to see this team winning with Greiss in between the pipes and this lack of offensive production. Nashville should be bigger favorites in the Blues vs Predators odds.

The Predators have not had a hot start to their season, especially since their trek to Prague. Since winning their first two games against the Sharks, the Predators have dropped five straight.

Their most recent loss was against the Flyers, which was on Saturday, October 22nd (5 days ago), a game they really shouldn’t have lost. The Predators out chanced the Flyers in that loss with 3.31 expected goals to Philadelphia’s 2.72. Nashville had 53 shot attempts, but ran into a tough Carter Hart. I think a well rested group of forwards and Juuse Saros will be an advantage in this one.

The Predators are a much better team than their record. They have the 12th best Corsi%, 14th best Expected Goals per 60 at 2.51, and are ninth in High Danger Chances.

Saros has REALLY struggled against the Blues in his career and especially recently. The Finnish netminder has a 4-6-1 record, 3.58 GAA, and a .878 SV%. Predators have been good at limiting high danger chances, but are 2-4-1 in the first period.

If they can get a quick one early, I think that’ll really allow Saros to settle into this game.

Look the Preds have lost five straight, they’ve had a long four days to let this losing streak stew, and now they play a team they have dominated at Bridgestone Arena.

The Blues are 3-11 in their last 14 trips to Bridgestone Arena and the home team is 25-12 in their last 37 meetings. These are important trends to note when analyzing the Blues vs Predators odds.

They are 1-6 ATS to start this year, and haven’t covered in Bridgestone Arena yet. This barn will be buzzing, I’m riding the Predators -1.5 at BetMGM.