What We Learned from NFL Week 6 – Are the Buccaneers in Trouble? 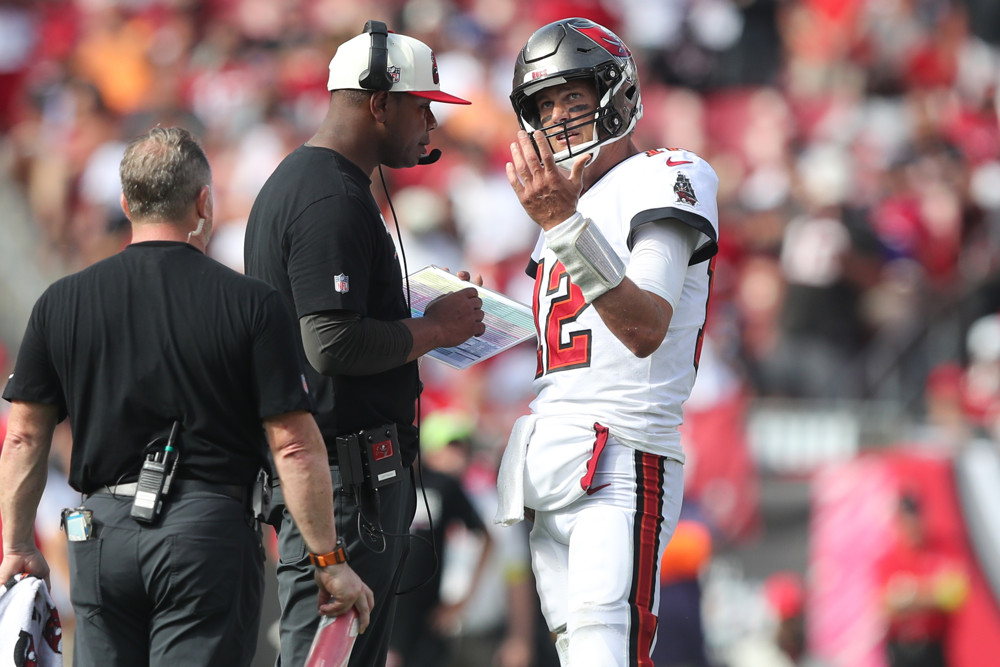 NFL Week 6 was the first in which we had teams on byes, but the comparatively smaller slate of matchups did not disappoint. More importantly, a few games on the schedule were anticipated as key showdowns before the week began, and they predictably gave us opportunities to read their outcomes.

As always, we will look to these results as a means to gain insight. Some will tell us what we could expect to happen in the future. Others will give us a read as to how the rest of the football-watching world is likely to view a team. And our job is to connect the two to find the mismatches.

The Buffalo Bills Claim the AFC

It was advertised as the game of Week 6 and, despite a slow start, it lived up to the hype. The two heavyweight powerhouses of the AFC — the Kansas City Chiefs and Buffalo Bills — faced off and the game was decided in the final two minutes of play.

No one missed it. Even if you didn’t see the actual conclusion, you saw the result. The Bills won and, in doing so, delivered an undeniable message: the road to the Super Bowl runs through Buffalo.

It might physically run through Buffalo as the Bills will now hold a key tiebreaker over the Chiefs but, other than the excitement and narratives that came from the game, we are still looking at a game in October and projecting ahead to how it will be replayed in January. There’s a lot of time between now and then, and there are countless moving parts.

Let’s remember this moment and take note of how the football world reacts to Buffalo’s win. We can easily see how this is going to vault the Bills’ perception, but it should not cause Kansas City’s stock to plummet. If anything, the Chiefs might now be undervalued in the AFC race.

“Good” is capable of winning games. “Good” is competitive. The New York Jets both. And they are 4-2.

Through six weeks, we have watched the Jets cycle through two quarterbacks, have a miracle victory against the Browns, and then travel to Green Bay for what-was likely to be the team’s regression to the mean. It never happened. Instead, the Jets — underdogs of roughly a touchdown worth of points — won by seventeen.

If you weren’t paying attention to New York before, you certainly are now.

But again, we have to question the validity of the success? 4-2 is a solid record no matter the competition or means by which the wins were obtained. Still, we aren’t in the business of defining the past. We are here to gauge how it relates to the future.

Unfortunately, the jury appears to still be out on the Jets. Where some argue that this is a team on the rise, others can point to the fragile wins that have led us here. The real answer probably lies somewhere in the middle, where we can look to sell if suddenly start to become favored in more games and buy if they remain underdogs. Basically, we have to play the moving marked on New York.

The Tampa Bay Buccaneers are in Trouble

I’ve written about the potential concerns with the Buccaneers in the past, but some of those moments were born out of intentional overreaction — where the goal was to highlight what others may have incorrectly noted about the team. Now, it’s real.

The Buccaneers are, indeed, in trouble.

The concern with Tampa Bay is multi-faceted, but we should probably start with the most important one: there is competition in the division. It was always likely — did we really think that the NFC South was going to be won by a four-game margin again? — but the fact that two other teams have entered the fray makes the path to another divisional title more difficult. Following Week 6, the Buccaneers are tied with the Falcons at 3-3 and only one game ahead of the Saints.

The obvious point-of-emphasis is the team’s offense. Tampa Bay has now failed to score more than 21 points in five-of-its-six games. The team’s defense had been great under then-coordinator Todd Bowles, but his promotion to head coach has coincided with an offense that ranks in the bottom-half of the league for yards-per-game.

Most football fans would accept the state of the Buccaneers right now because of quarterback Tom Brady and his historic accolades in the past. There may simply be too many obstacles to overcome in 2022 for a team that hasn’t yet shown that it will surge to victory.

The Dallas Cowboys Fell Back to Earth

Prior to Sunday Night Football’s loss, the Dallas Cowboys had won four straight games, all while led by a backup quarterback and by allowing no more than 17 points. Both of those elements were simply unsustainable.

They did not sustain a trip to Philadelphia.

By the end of their loss to the Eagles, the Cowboys put up enough of a fight to save face. Throughout the contest, however, it was clear that Dallas was overextended for too long. The team trailed 20-0 in the first half and was miserably ineffective in all facets of the game. Overall, the Cowboys turned the ball over more times on Sunday — three — than they had all previous weeks combined — two.

Dak Prescott said it is his plan to play next week against Detroit. He said his early throwing before kickoff Sunday went great. The plan remains that he will have a full week practice before returning but is more than optimistic.

The obvious storyline before and after the game was quarterback Cooper Rush. As previously stated, he had led the team to four wins in the absence of starter Dak Prescott. Because of the team’s success under Rush, new rumors surfaced that the Cowboys might have a quarterback controversy.

It was foolish. Prescott would take the reins back as soon as he became healthy. But now, we need to pay a little closer attention to the timing. Dallas had pushed itself back into the divisional race with the 4-0 stretch, but a loss to the Eagles and the 5-1 record for the Giants adds another layer of difficulty. The Cowboys have home games against the Lions and Bears before heading into their bye, and we should learn definitively if last week was, indeed, a move back toward the mean or if it is the Cowboys’ true direction.