What We Learned from NFL Week 3 – Are the Eagles a Contender? 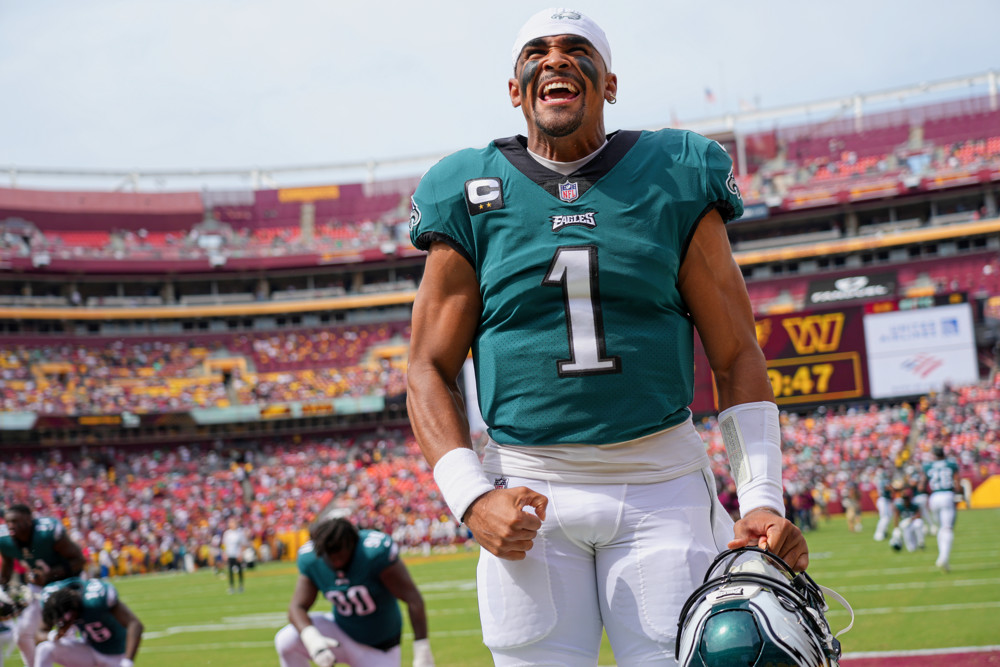 We continue to move away from the offseason expectations that were placed on each squad, and we now have three games to use when forming new conclusions. The season may still be young, but it certainly isn’t brand new anymore.

Some of the opinions, however, are.

Many of the changes we are seeing have been built on snap judgements where the small sample size may not be indicative of a team’s true resume. As long as we can acknowledge this, we won’t fall for the same traps as others. If anything, we can pounce on their potential mistakes.

The Eagles are Unstoppable

Let’s chalk this one up to timing and circumstance. We actually “learned,” as the title of this series states, that the Philadelphia Eagles are surging after Week 2. Since the game was played on Monday Night Football, however, last week’s article had already been released.

That didn’t stop the rest of the football-watching world from falling in love with Philadelphia.

The Eagles dominated the Vikings in Week 2 and then were set up perfectly for a letdown against a divisional opponent on the road. Instead of falling victim to the possible ‘upset’, Philadelphia took control of another game and never looked back.

Perhaps it’s more accurate to say that we re-learned the Eagles are currently unstoppable.

The last few weeks have only moved the team’s stock higher, and every game is serving as support for the claim that Philadelphia really is one of the best teams in the NFC.

There is a problem, though.

I opened this section by mentioning both “timing” and “circumstance.” Those words weren’t just dedicated to the mention of Philadelphia and its newfound support. That comment also applies to how the Eagles are wining games. Namely, they have one of the easiest schedules in the league, especially at the start of the year.

Some teams can be sold immediately and some will take time. The latter is the case for the Eagles. Their schedule and hot start — where they undoubtedly have earned the praise they have received — is going to quickly inflate the win total. Let’s not confuse the overall record with the underlying performance. For now, the two are aligned, but let’s stay aware of the likely separation where we can then pick against Philadelphia and gain tremendous value.

The Jaguars are No Longer Pushovers

A 38-10 thrashing of an opponent is going to open some eyes. Add in the fact that it happened on the road against a talented Chargers team, and people will now be looking squarely at the Jacksonville Jaguars and not laughing.

Has Jacksonville turned a corner?

In reality, this is not surprising news. The Jaguars drafted one of the best quarterback prospects of the last decade or so with Trevor Lawrence last year and then immediately rectified a situation that was sending the franchise further down a spiral. Three weeks into the season, we can see that this isn’t the same Jaguars team as in years past.

It’s completely plausible that this is the best Jacksonville can offer. Perhaps the win over the Chargers had as much to do with Los Angeles’ quarterback, Justin Herbert, playing at less than 100 percent than anything the Jaguars did. Still, we had the opportunity to pick Jacksonville at a large spread in Week 3, and that type of value may have dissipated. Let’s keep a close eye to see if the trend starts to move in the opposite direction.

The Texans Keep Fighting… but Not Winning

I could conceivably copy-and-paste everything that I have written about the Lions in the past few weeks and use it for the Houston Texans. The team has now played three inspired games and has a total of zero wins to show for it. Granted, Houston isn’t 0-3, but the 0-2-1 is going to do little to convince anyone that the Texans are better in 2022.

Good. Let the collective football-watching world be late to the party.

Right now, the Lions are being applauded for their tough losses and competitive spirit, and it seems like the losing record is being overlooked. Conversely, the Texans have the same amount of losses, yet are receiving no respect. The longer this can continue, the longer we can buy into an undervalued team that, unlike the aforementioned Jaguars, should continue to receive a healthy number of points in the spread on a weekly basis.

In comparison to a few teams mentioned earlier in this article, the Tampa Bay Buccaneers are doing one thing well: winning. Indeed, they lost in Week 3, but the team is still 2-1 through three weeks and, thanks to the state of the NFC South, in sole possession of first place in its division.

That does not mean the Buccaneers are perfect. In fact, if we take a peek under the hood, we can see that it is time to worry.

Quietly. We don’t want to alert the masses of this edge just yet.

For the time being, the 2-1 Buccaneers and Greatest-of-All-Time quarterback will receive a metaphorical pass, but something is clearly amiss. The offense has now scored just three touchdowns on the year and has failed to reach 21 points in any game to date.

After the game, Aaron Rodgers implied that he saw something on the Buccaneers Jumbotron that might have given the Packers an edge pic.twitter.com/f2uCVyOqf9

Let’s also not forget that the head coach of Tampa Bay was Bruce Arians, once of the most offensive-driven minds in the sport. Now, Todd Bowles is at the helm, and he hails from the defensive side of the ball. We’re already seeing the transition impact how the games are managed.

Tampa Bay had a chance to go toe-to-toe with another All-Time Great quarterback in Aaron Rodgers on Sunday and could not find the path to success. As it stands right now, that doesn’t seem likely to change.