What We Learned from NFL Week 2 – Are the Broncos in Trouble? 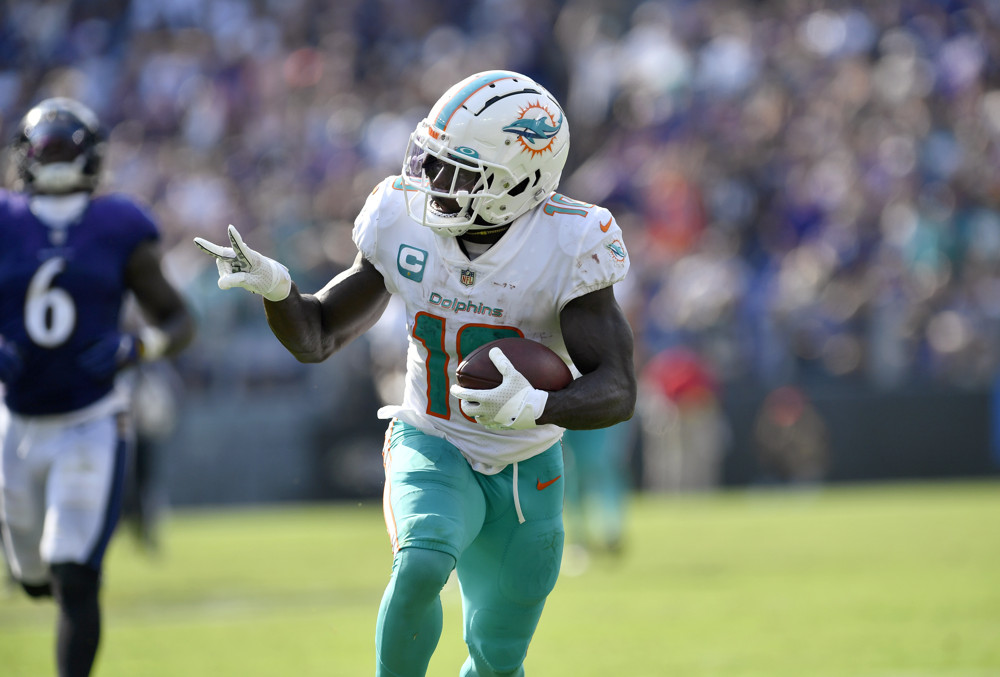 The irony? It felt as if this year was a little more protective of the overreactions. It seemed like people were aware of their presence and the risk they carried, and then moved away from them.

We should welcome this.

The point of this column is always to target the changes in perception that came about from a week’s worth of games. Many times, we only get that week’s set of games. This year — and because we now have eight quarters of football from which we can draw conclusions — we can prepare for what will come next and attack it accordingly.

The Miami Dolphins are Explosive

I’ll start off with my favorite one because it has the two elements that we would want: mistaken takeaways and an overextension in one direction. Starting with the latter, we can look at the Miami Dolphins as a “perfect” 2-0 team because, technically, that’s what they are. Throw in 62 points over a two week span — again, simplifying this for the sake of drama, that’s an average of 31 points-per-game — and we have the fun buzzword of “explosive” to attach to them.

Everything is positive about the Dolphins right now and, with two weeks to use as proof, there is no longer the protection against overreaction.

Great. Let others overreact. We won’t. Because now we can point to the “mistaken takeaways” from what we watched in Week 2.

Indeed, the Dolphins scored 42 points, but the game was the epitome of “desperation mode.” The Dolphins trailed from the opening kickoff for nearly the entire game and went into an all-out, high risk-reward form of attack. Of course, the actual come-from-behind victory was extraordinary, but that’s not how the Dolphins plan to win games.

In fact, Miami’s shaky success stretches back to Week 1, where the Dolphins scored 20 points, but had a defensive touchdown and a 4th-and-7 play break free to find the end zone.

All told, Miami is a 2-0 team that deserves praise for finding ways to win, but cannot be asked to continue along this pace for much longer. We should be looking to sell whenever possible.

The Indianapolis Colts are in Trouble

Think of the path the Indianapolis Colts took to where they are right now. They have assembled a solid team with a superior coaching staff but continually appeared to be a quarterback away from sustained success. Promptly, the Colts went out and got a quarterback. Then another. And another.

This year’s iteration is Matt Ryan and, with a quick look at the schedule, the Colts could put the pieces of their puzzle together and find an immediate reward. They would play the Texans and Jaguars to start the year, go 2-0, collect two division wins along the way, and continue their upward climb.

The Texans and Jaguars had other plans.

We’re now two weeks into the Matt Ryan era in Indianapolis, and the Colts are 0-1-1 without a single division win. As an added punishment for this slow start, the Colts now get to take on the 2-0 Chiefs.

Indianapolis is in trouble. That’s not an overreaction. But to think that the team is suddenly going to plummet to the basement of the league is too reactionary. Maybe we can’t immediately take advantage of the newfound acknowledgement that the Colts aren’t going to cruise to a divisional title, but we can hold onto it for the next few weeks. There will be opportunities.

Something is Wrong with the Denver Broncos

The Denver Broncos lost to the Seahawks on national television in Week 1. It shocked many people. It shouldn’t have surprised anyone. The setup was prime for the Seahawks to put up a fight and, in the National Football League, that’s how upsets occur. Because the natural progression for that would be the Broncos hosting a worse team like the Texans and then obliterating them in a rebound victory.

It didn’t happen. Now, we need to question the Broncos.

The #Broncos just ran the option… with their TE John Beck. Javonte Williams btw is averaging 6.7 YPC. Then, a delay of game. Now, Nathaniel Hackett is punting because it’s 5 yards back for Brandon McManus. This is as bad a 2-game head coaching performance as I’ve ever seen.

By the end of the game, Denver did finish with more points than Houston. The Broncos won and improved to 1-1. But throughout the process, Denver never took over the contest nor did it bring forth a level of comfort. In fact, it was the opposite feeling. The Broncos looked conservative and poorly coached. The fans confirmed this by vehemently voicing their displeasure toward head coach Nathanial Hackett following another mismanagement of the clock.

Denver plays in one of the most difficult divisions in football, and its 1-1 record could have easily gone in either direction. Let’s pay attention to the Broncos over the next few weeks to see if they can separate themselves from mediocrity. They have the chance to do so with another home game on deck. Denver happens to be one of the most difficult places for an opposing team to play early in the season when conditioning is not up-to-speed in high altitude.

The Detroit Lions are a Powerhouse

Maybe the Washington Commanders are just bad, but the Detroit Lions made a statement with a win — you read that right, a win — after being favored for the first time in years. And it wasn’t just a win. The Lions dominated, gave back the obligatory garbage points, and then pulled away.

Dare I write it, but the Lions looked the part of a good team.

Excellent. This is what we want. We want opportunities to find mismatches, and the Lions are forming one in front of our eyes.

The Detroit Lions are averaging a league-leading 3.8 (!!) yards BEFORE contact per rush, per TruMedia.

That offensive line is a fucking monster.

Before the season, Detroit was one of the most popular sleeper teams to eclipse a low win total. A three-point loss in an inspired game against the Eagles and the convincing victory we just witnessed in Week 2 is all that people will need for their confirmation bias. No, the expectation hasn’t raised to playoff-worthy levels, but those who believe they were early to buy into the Lions feel like they are rewarded.

Let’s watch the market in the coming weeks to see how it reacts to the Lions’ win and if there is any substantial foundation on which the team can build. If Detroit can’t produce wins, then this might be the type of hype that we want in order to over-inflate a team’s expectations.