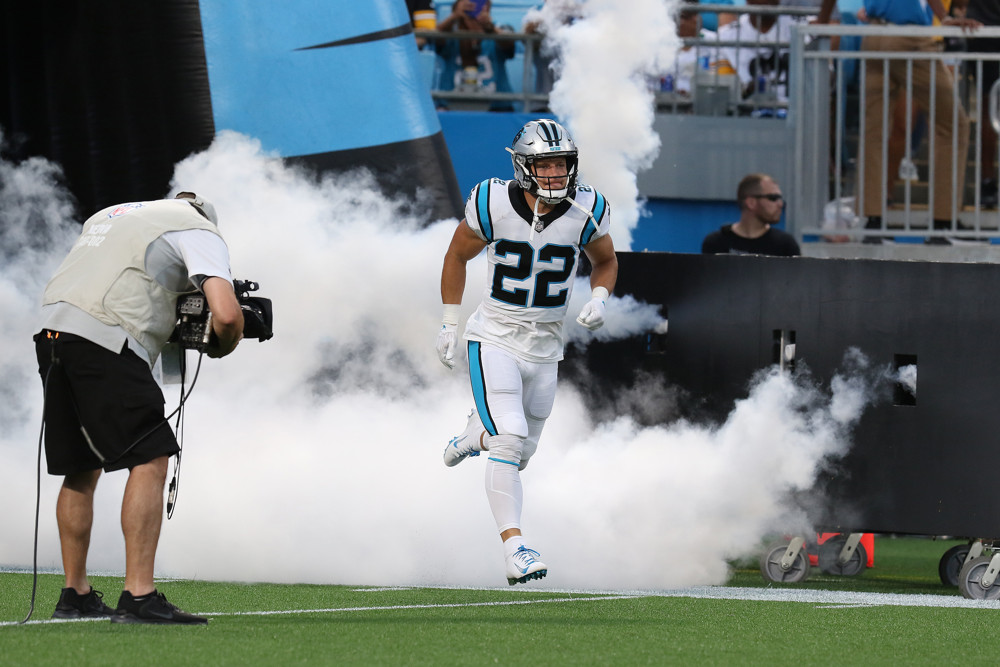 Week 1 has finally arrived. I hope everyone is as pumped up and ready for some NFL action as we are! It was a long, drama-filled summer in the NFL, and opening day is quickly approaching. NFL player props are all the rave as more online sports betting markets open up. Bettors can bet on touchdown scorers, over/under yards, and more. We break down our three favorite NFL player prop picks for Week 1.

Remember to always do your due diligence and shop around the industry for the best odds before placing your bets! We’ll be looking at DraftKings, Caesars Sportsbook, and BetMGM for this article.

DraftKings Sportsbook easily has the best price on Christian McCaffrey to score a touchdown, which goes to show there are multiple NFL online sportsbooks people should be looking at for lines.

It’s only Week 1, he can’t be hurt already, right? In all seriousness, I was surprised to see a number this low here for McCaffrey. Carolina are 1.5-point favorites in the Browns vs Panthers odds, who wildly enough have not won a Week 1 game since 2004.

Who will have the biggest comeback year? pic.twitter.com/CfNbcuL1H7

This is too good of a spot to pass up in terms of raw volume. We all know it has been a few years since he was last healthy, but we must remember just how big of a part of this offense he has been when healthy. He has a receiving/rushing prop of 118.5, so it is evident the books expect him to be heavily involved in this offense.

His pass-catching upside along with his consistent red zone work that we have seen across his career have me all over this line at -120. He has been quoted this summer as saying this is the best he has felt in years, and I’m buying in on CMC being a full go.

I have seen this on other books as high as -175, so if you can land anything near even money at -120, don’t be shy. Look for CMC to find the pay dirt in Week 1 as my top NFL player prop pick.

I think this is one of the spots where Louisiana sports betting apps are hesitant to adjust to what the number should be. I have this line at least five yards short, and I wouldn’t be surprised to see Thomas rip off a huge first game back after missing the entire 2021 season.

I am not buying into the claim that Michael Thomas is washed. He is only 29 years old after all, and having taken a full year off to recover, should be coming into this game as close to full health as we’re going to see.

Having a gunslinger like Jameis Winston at the helm only helps Thomas, as we have plenty of evidence over the years that he is not afraid to throw the ball all over the field. I’m looking forward to Thomas and Winston quickly establishing a connection in a beautiful Week 1 matchup as 5.5-point favorites against the Falcons.

As long as Atlanta can remain competitive in this game, I think Thomas gets a lot of looks. Get ready for Thomas and Winston to make some noise in NFL Week 1 as they both look to exceed their NFL player prop totals on the road.

Saquon Barkley has underperformed for the past few years for two reasons: Injury and the Giants being a bad football team.

While I’m not optimistic that the latter will change much, I am optimistic that Barkley is healthy and ready to do everything he can for this offense that desperately needs production. The addition of Brian Daboll as head coach is a huge win for the Giants, specifically their offense. As 5.5-point underdogs, it is likely the Giants will be trailing this game in the 2nd half, and I don’t think that abandoning Barkley, as a result, is a winning formula.

The Giants are 6-point underdogs:

And 17.2 fantasy points as an underdog in his career.

Instead, look for Brian Daboll to resort to more creative ways of getting the ball into Barkley’s hands. It seems like a lifetime ago, but we should remember that in Barkley’s first two seasons (2018, 2019), he played 29 games and recorded 143 receptions for 1,159 yards, an average of 40 yards per game.

With the addition of Daboll, I think his talents are amplified in the passing game even more so than they were early in his career. It’s always nice to have action on a prop that can hit in one play, and this is one right here. New York sports betting markets are listing Barkley’s receiving prop a little low, in my opinion.

Look for Barkley to be involved in the passing game more this season, starting with the Giants’ week 1 tilt against the Titans.