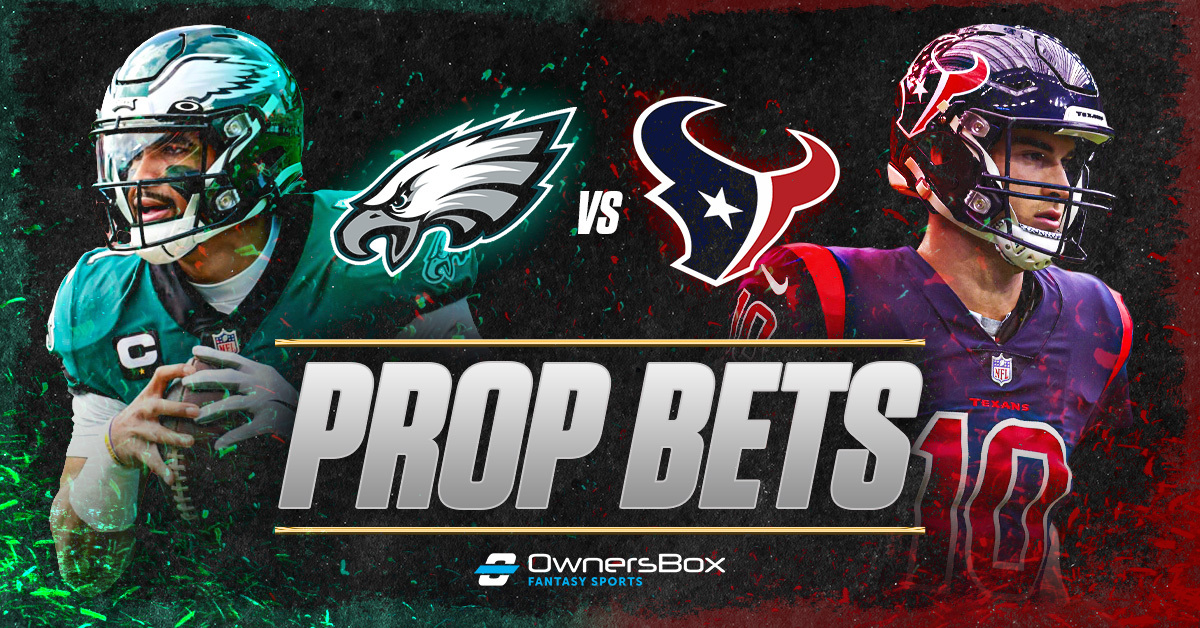 Welcome to NFL Week 9. This week, we have a pretty dusty matchup on the Thursday night game with the struggling Texans hosting the last remaining undefeated team in the NFL in the Philadelphia Eagles. Jalen Hurts and co. will look to keep the perfect season alive as they travel down to Houston to take on Davis Mills, Dameon Pierce and the 1-5-1 Texans. This week, we watched Jalen Hurts and AJ Brown put on a first half clinic, connecting 3 times for touchdowns all in the first half in a very easy win over another terrible team in the Pittsburgh Steelers. It sure does seem like there is a lot of bad football being played this season, and unfortunately I don’t see this game being much to write home about. I expect the Eagles to win handily, and will be targeting a few props accordingly. Let’s hop right into the plays.

Be sure to shop around New York sports betting sites for the best Ravens vs. Bucs odds before placing your bets! We’ll be looking at DraftKings, Caesars Sportsbook, and BetMGM for the best NFL Week 9 Thursday Night Football props.

Last week, we saw the Tennessee Titans basically abandon the passing game with rookie QB Malik Willis at the helm and simply jammed Derrick Henry up the gut the entire game. Point being is that Houstons defense is legitimately awful. They knew damn well that the Titans wouldn’t want to throw, and still couldn’t do anything about it. I envision a similar result Thursday night, as a simply far superior football team in the Eagles will be coming in to crush the awful Texans. Jalen Hurts leads the NFL in rushing attempts from the QB position inside the 5 yard line with 11, and I think getting near even money on him to find the pay dirt on the ground seems pretty fair.

He is coming off a 4 passing TD game and I look for that to regress back to the norm here a bit with some rushing work against a team that cannot stop the run at all. Both props will be focused on Hurts, but it is for right reason. The Texans are giving up an absolutely absurd 186 rushing yards per game. This has a blowout written all over it and I think a ton of these Philly guys end up with strong fantasy showings by the end of this game.

As previously mentioned, I have zero respect for the Texans run defense. It is as close to non existent as you will see in the NFL in 2022. Getting gashed for almost 200 yards per game on the ground is so unbelievably bad, let me put it into perspective. In 2020, the Texans were dead last in the NFL, allowing 146 yards per game. In 2021, they were 2nd last, allowing 142. This season, they are giving up nearly 40 MORE yards on top of a league-worst average at 146 last year. That is astonishingly bad, and we must take advantage.

The line for Miles Sanders is a little uncomfortably high at 74.5, so I haven’t decided if I’ll be on that as well. However, I want all the Hurts action as possible as I think this is a huge game for him. Everything sets up way too well, and it’s a spot where I’m willing to jam the statistically correct plays and live with the results. Look for the Eagles to absolutely smoke this terrible Texans team on Thursday night, with Jalen Hurts leading the way with a huge game on the ground. I am living and dying with Hurts on Thursday, and will have plenty of action on the over of 39.5 rushing yards.