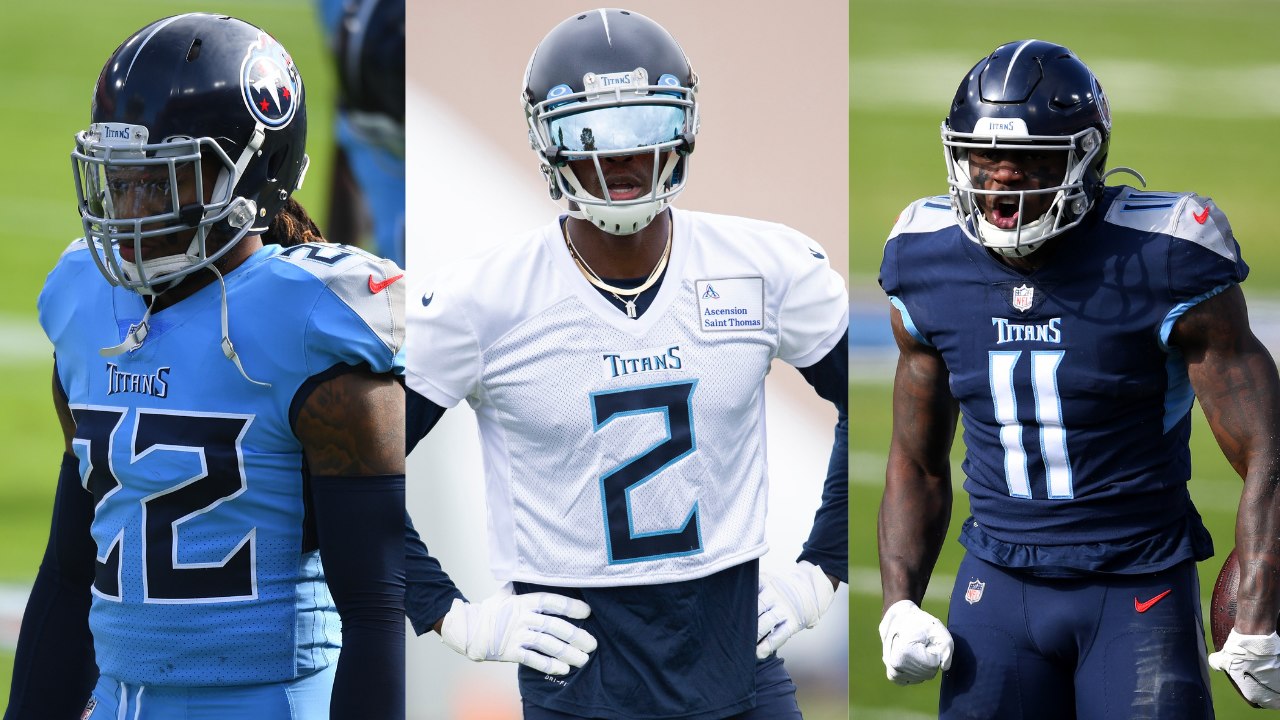 2020 Result: Lost in First Round to Baltimore

Story of the Offseason: A GOAT Arrives in Nashville 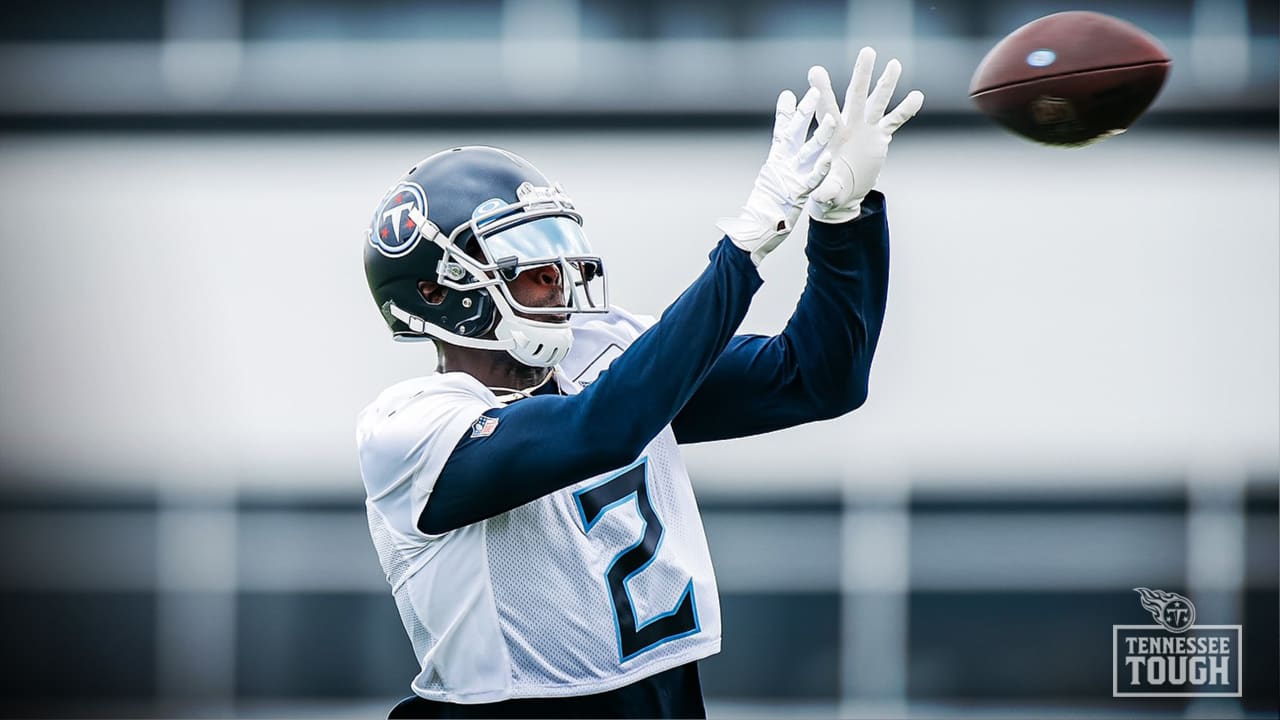 Julio Jones move from Atlanta to Nashville is certainly the story of the offseason for the Tennessee Titans. Julio had reportedly requested a trade early in the offseason, deciding his time was done in Atlanta after 10 seasons of limited success. The trade rumours really heated up when Julio was spotted wearing a Cowboys shirt and then appeared on Shannon Sharpe show saying that he was “out of there” in regards to the Atlanta Falcons organization.

Julio gets a new home in Tennessee, and a fresh start. Entering his age-32 season, Julio is still one of the elite wide receiver talents in the NFL, and 2021 might just be Julio’s revenge tour on the NFL as he has another Pro Bowl season and silences anyone that doubts that he is still among the NFL’s premier pass catchers.

The Titans offense promises to be amongst the most electric in the NFL with the newly acquired 7-time Pro Bowl Wide Receiver Julio Jones slotting across the field from AJ Brown; defences cannot afford to double either of these elite wide receivers with Derrick Henry in the backfield. The Titans offensive line is among the best in the league at run blocking, creating huge lanes for Henry to run through opposing defences, and the team returns the offensive line starting five for another season. Lets take a look at some of the key additions and losses from the offseason for the Tennessee Titans.

Julio Jones is by far the most notable offense season addition for the Titans offense. The 32-year-old two-time First-Team All-Pro wide receiver should take the Titans offense to new heights, but the question is his health, specifically his legs. Julio has already sat out multiple weeks of training camp managing his leg injury, and the Titans have said it may be an issue that needs to be managed all-season long. Expect Julio to enter most weeks with a questionable injury tag, but to play more games than not as that is the Julio way. If Julio can play 14 or 15 games, expect 1200 yards, and perhaps a career high in touchdowns as Tannehill looks his way early and often in the red zone.

Tight end Jonnu Smith is now a New England Patriot. On the first day of free agency, as part of New Englands huge spending spree, their first signing was Jonnu Smith for 4 years and $50,000,000. Jonnu Smith is undoubtably amongst the most athletically gifted tight ends in the NFL, as he could play wide receiver or running back at the NFL level; Belichick has been an open admirer of Jonnu Smith, calling him one of the best tight ends in the league before a playoff matchup in 2019, so its no surprise Jonnu was at the top of Bill’s free agency shopping list. Jonnu’s potential was never really fully realized in Tennessee, so maybe a new contract and a change of scenery will help Jonnu breakout.

The Titans did not really sign any replacements for Jonnu Smith, so  last season’s backup Anthony Firkser will step-in as the starting tight end in Tennessee this season.

Corey Davis joins the New York Jets via free agency on a 3-year $37,500,000 deal. Davis will be the lead receiver on the Jets, a role he lost with the Titans after being surpassed by AJ Brown the past two seasons in Tennessee. A former 5th overall pick in the 2017 NFL Draft, Corey Davis never really lived up to his draft capital in Tennessee, with only two notable seasons of decent production. The Titans were able to replace Corey Davis with Julio Jones, so Davis will likely be quickly forgotten by Titans fans.

Offensive coordinator Arthur Smith was hired, somewhat ironically after the Julio trade, as the new head coach of the Atlanta Falcons. It will be interesting to see if the Titans remain as run heavy as past seasons as Arthur Smith was all about running the rock, to the point where Henry ran for over 2000 yards in 2020. The Titans offensive philosophy should remain similar under new offensive coordinator Todd Downing as he was Arthur Smith’s understudy in Tennessee last season as the Titans’ tight end coach in 2020. 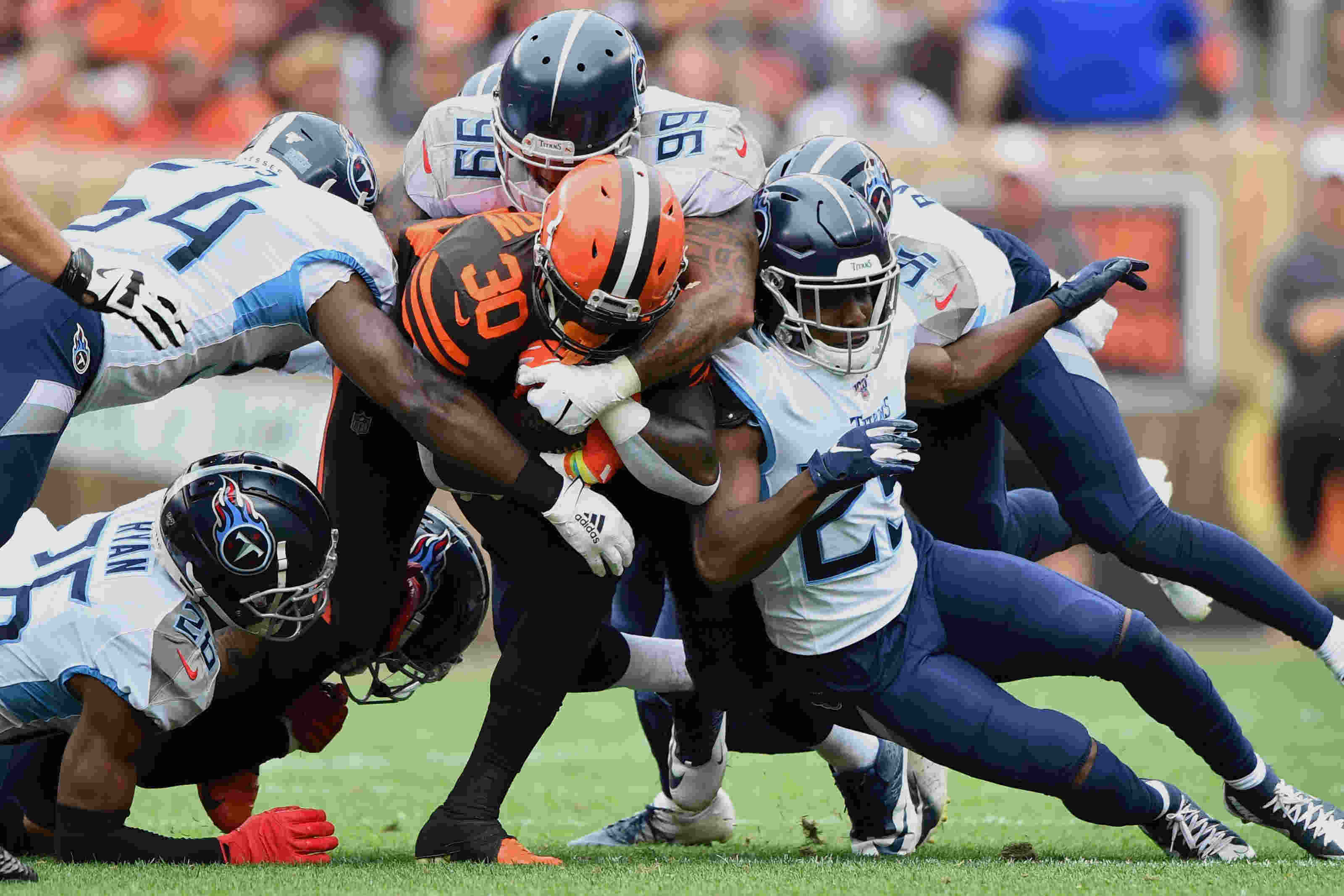 The Titans defense has been unspectacular for a few seasons now and the team really only treaded water this offseason, with a bunch of one-in-one-out deals at key defensive positions. The key here is the Titans’ secondary and their incompetence in pass defense, especially on third-down where the team just cannot seem to get off the field. Lets get into some of the key acquisitons and losses in defensive personnel from the Titans offseason.

The marquee signing of the offseason, Bud Dupree joins the Titans on a 5-year $82,500,000 deal after 6 successful seasons in Pittsburgh; the caveat is that there is only 2 years at $34,000,000 guaranteed for Dupree. Dupree can play football and he can definitely get after the quarterback with 20 sacks over the past two seasons. Bud Dupree is the true offseason addition for the Titans as rest of the additions on the line and in the secondary were to replace outgoing players. Bud Dupree is a great piece but likely not enough to vaunt the Titans defense to the top tier in the NFL.

The Titans added veteran pash rusher Denico Autry via free agency from division rival Indianapolis Colts. Autry will replace Jadeveon Clowney on the defensive line as a pass rusher, and Autry is perhaps and upgrade in the pass rush for the Titans as Clowney was remarkably underwhelming last season.

The Tennessee Titans selected Caleb Farley with their first round pick in the 2021 NFL Draft. Farley is an intriguing prospect as many analysts had Farley going in the top half of the first round but back injury concerns caused Farley to drop to the Titans. The Titans drafted Farley for both upside and for need and they hope Farley can develop into the shutdown corner the teams desperately needs.

Clowney is now on the Cleveland Browns’ roster after signing a one-year $8,000,000 deal. Clowney was a big disappointment in 2020 with 0.0 sacks for the Titans.

The Titans other 2017 1st Round Pick Adoree Jackson switches places with Janoris Jenkins and is now a starting cornerback for the New York Giants across from pro-bowl corner James Bradberry. Adoree Jackson is a very athletic player, and great in man coverage; while Adoree only had two interceptions in his four seasons in Tennessee, he excelled more in man coverage than zone coverage which explains the limited interception totals. Janoris Jenkins and Caleb Farley will look to replace Adoree Jackson in the Titans cornerback room. 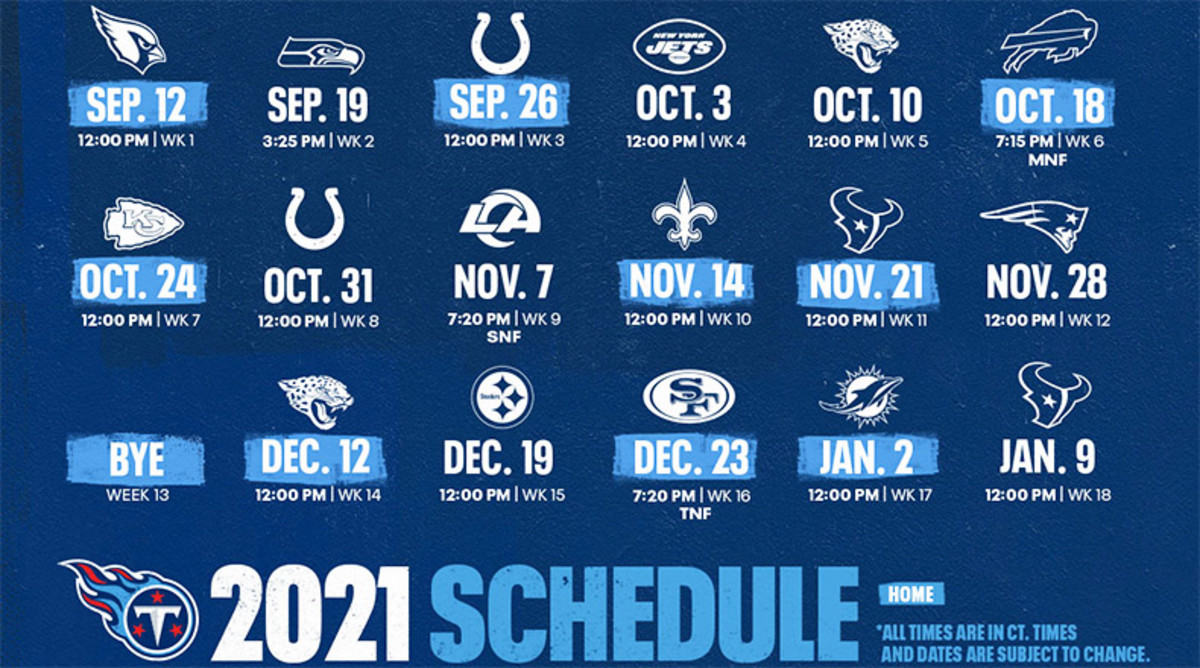 While the Titans will have a cakewalk through their division, their out-of-division matchups are tough with matchups against the formidable NFC West and emerging AFC East. The Titans open with a relatively easy 5 game slate, except for a road matchup against an eerily-similarly-built team in the Seattle Seahawks.

I foresee the Titans jumping out to 5-0 start before taking tough losses to the Bills and Chiefs in Weeks 6 and 7. The Titans are a team that is built to dominate bad teams, but lose close games to good teams. The defense just can not get stops on 3rd Down. There will be many high scoring games for the Titans this year, but it is easy to see the Titans securing a playoff berth as champions of the AFC South. From there, its an uphill battle in the playoffs for the Titans to overcome the Chiefs, Bills, and Browns, and I predict the Titans exit the AFC playoffs in the Divisional Round (Second Round). 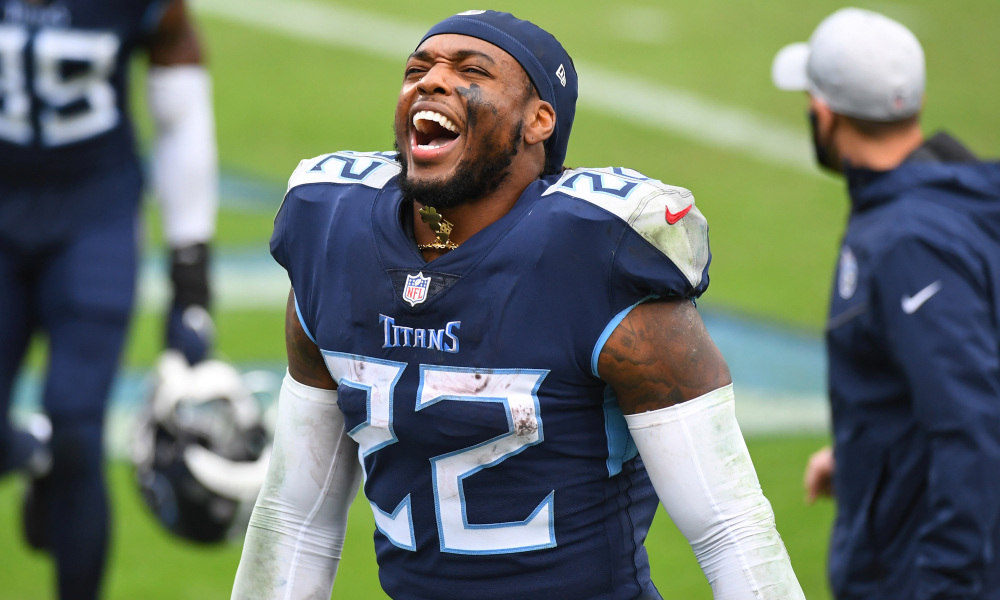 This offense looks downright unstoppable on paper; but defense is the Titan’s achilles heel. The Titans need to improve their cornerback room if they want to be a true contender for the AFC Championship, as the way the defense stands now, Mahomes and Allen will be able to walk right through them unfortunately. Still, I have a ton of belief in the Titans, as adding the GOAT wide receiver will make this team a ton of fun to watch in 2021, and if King Henry can win a few tight games on his own, I might just be wrong on the Titans exiting the playoffs as early as the second round; maybe it is time for another Music City Miracle in 2021!