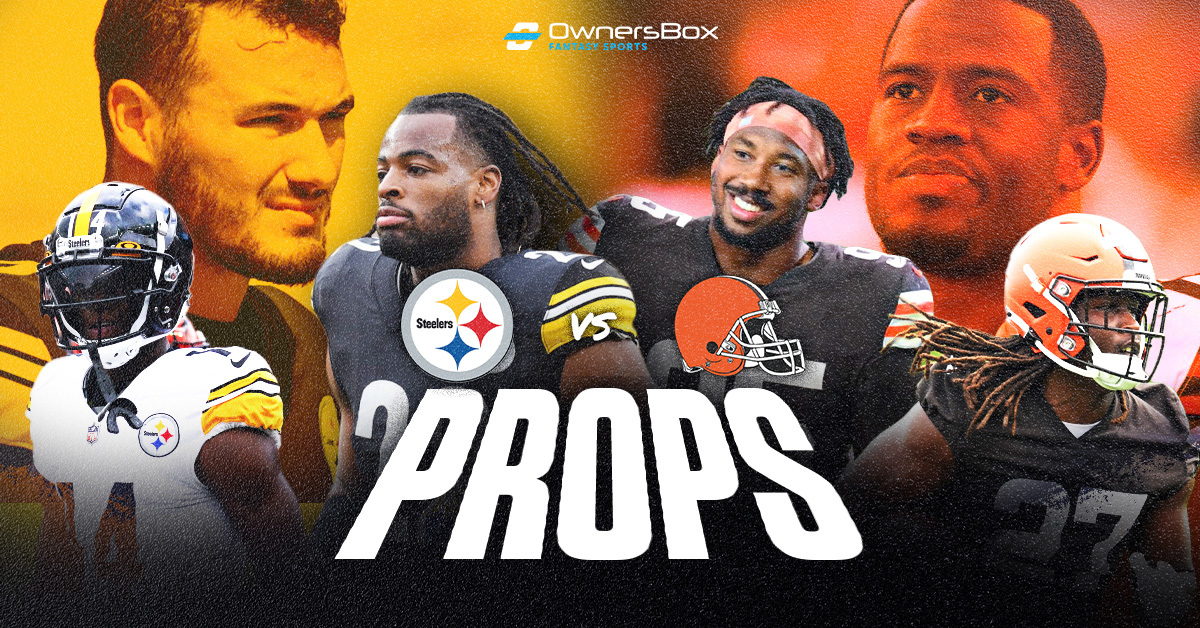 Welcome to NFL Week 3! We are looking to keep the good momentum rolling, as we are off to a 4-1 start this season with our prop bets. There are a few great spots to attack in this week’s Thursday Night game when Pittsburgh heads north to face off against a division rival in the Cleveland Browns. Let’s dive into our best Steelers vs Browns props.

Be sure to shop around the industry for the best Steelers vs Browns odds before placing your bets! We’ll be looking at DraftKings, Caesars Sportsbook, and BetMGM for the best NFL Week 3 Thursday Night Football props.

Odds as of September 20th

Use the BetMGM bonus code ‘OWNERSBOX’ to get a $1,000 risk-free bet for Steelers vs Browns.

The Steelers have already given up two 100-yard receivers in their two games so far this season, with Ja’Marr Chase going for 129 yards on 10 receptions in Week 1, and Nelson Agholor going for 6/110 on Sunday. This looks to be a great spot for Cooper, who is coming off a breakout game in Week 2 going for 9/102 and a touchdown. Despite the Browns being a run-heavy offense, it is evident that Jacoby Brissett is at least somewhat comfortable throwing the ball Cooper’s way when needed.

Amari Cooper had a 90.9 PFF grade vs the Jets — the highest grade among all offensive players in Week 2.

After blowing a two-touchdown lead late on Sunday against the Jets, look for the Browns to come out firing on offense Thursday at home. In turn, I will have lots of action on Cooper’s receiving yards as one of my top Steelers vs Browns props, as well as another Cleveland Browns player that we will discuss next.

Kareem Hunt has always been a dynamic player who can do a lot for an offense. His ability to catch the ball out of the backfield is one of his key strengths, as we have seen for years. He is certainly the pass-catching back, as we routinely see Hunt making plays out of the backfield on a more regular basis than Nick Chubb does. This leads to a pretty nice spot for Hunt who has a silly receiving prop of only 15.5 yards.

Through the first 2 games this season, Hunt has 4/24 and 2/16, both rather modest results. However, I expect these few games to be on the low end of the range of outcomes, and for that reason, I’ll be targeting the over in this spot.

NEXT UP: @steelers vs. @Browns on TNF!#PITvsCLE — Thursday 8:15pm ET on Prime Video
Also available on NFL+ https://t.co/fK7vaWiHIa pic.twitter.com/6tSIJzaLPT

Hunt has explosive playmaking upside, allowing this bet to get home in one play if Hunt catches a dump-off in space, a screen, or a shovel pass. I really like to bet these spots where players only need one play to get there, and we have another great one here. Look for Kareem Hunt to easily find his way over 15.5 receiving yards this Thursday night as my second Browns vs Steelers prop.