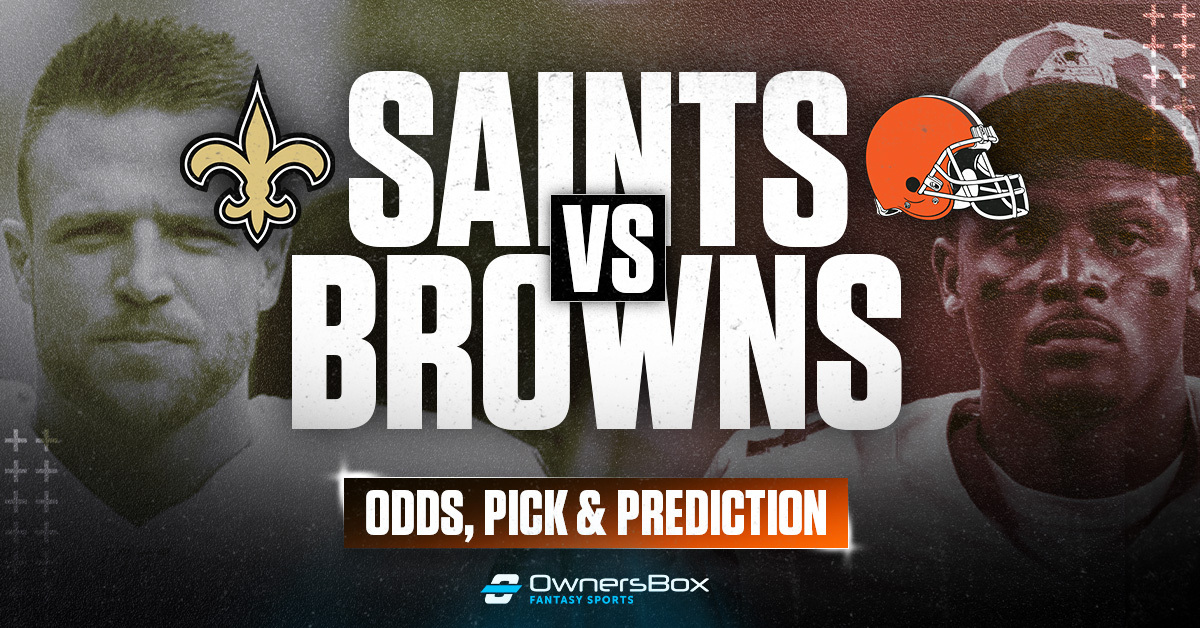 Christmas Eve in the NFL features an 11-game slate. Among those games is an interesting clash between two underwhelming teams in the New Orleans Saints and Cleveland Browns. Although people may look at this game and see two teams on the outside looking in, it is important to remember that betting angles and value can arise in these matchups the rest of the season. We’ll take a look at the Saints vs Browns odds to find some betting value.

The craziest part? The 5-9 New Orleans Saints are still alive in the NFC South and as sad as it sounds, they have motivation in this spot to stay afloat. On the Browns side of things, they are 2-1 since the return of Deshaun Watson but when you take a look at those outcomes, they were more indicative of their opponents rather than this Browns team. The weather in Cleveland will play a factor on Saturday as the forecast calls for wind and snow, making this game that much more interesting from a betting perspective.

Week 16 will mark the last time Buckeye sports bettors won’t be able to bet on the NFL or any sports for that matter. Ohio sports betting will be legalized in less than ten days on January 1, 2023!

Check out the best Ohio sports betting bonuses that are available right now for pre-registering, where you can claim hundreds of dollars in free bets.

The Saints need a win to keep pace in their division. One may argue they have a lot more to play for than the Browns but at the same time, the Saints are dome team from the south who are walking into what may be a snow game throughout. Weather in the NFL is often overplayed but in this one it could become a huge factor as the forecast also calls for 40mph winds with frigid temperatures. Weather aside, the Saints have been bad this season. They have a 5-9 record ATS and in a terrible division, they have refused to propel themselves into contention.

The duo of Andy Dalton and Taysom Hill found success last week and I expect them to do the same here. Taysom Hill will be an X-factor with a run-first approach from the Saints and if they can control the clock, they will be in a good spot to make the upset happen.

On the outside looking in, Deshaun Watson going 2-1 to start his Browns career may look great but when you really dive into it, he has been underwhelming. As it currently stands, the player benefiting most from Watson is Donovan Peoples-Jones, who is averaging 63 yards per game over his last three. Watson has thrown for 566 yards through three games and has only two touchdowns to show for it. With a 2-2 TD-INT ratio he has started slow and I expect him to continue his struggles this week. Whether he is still trying to shake some rust or his receivers not being on the same page as of yet, Watson still has a long way to go before we see glimpses of the player he used to be.

The Cleveland Browns are the Cleveland Browns. This is a statement to remind yourselves when you hear anything positive about this ball club, regardless of the players they acquire or the off-season buzz they create. They hold a 7-7 record ATS and with three games remaining, they do have a few weeks to once again fire up those off-season predictions of the Browns turning a corner next year.

Saints vs Browns Pick and Prediction

We have once again been hot on our picks and because it’s Christmas I’m going to go with two plays here. The Saints and the under. That sounds easy but I just think everything could come together for a 16-14 type game here. The important number here is getting the Saints at the +3 and if it does move to 2.5 I would lean to taking only the under. Maybe the weather will fool me and these offenses will get going but if the conditions are as bad as predicted, this game will be ugly, give me the points and the under.