Ravens vs Saints Odds, Preview, and Betting Pick for MNF 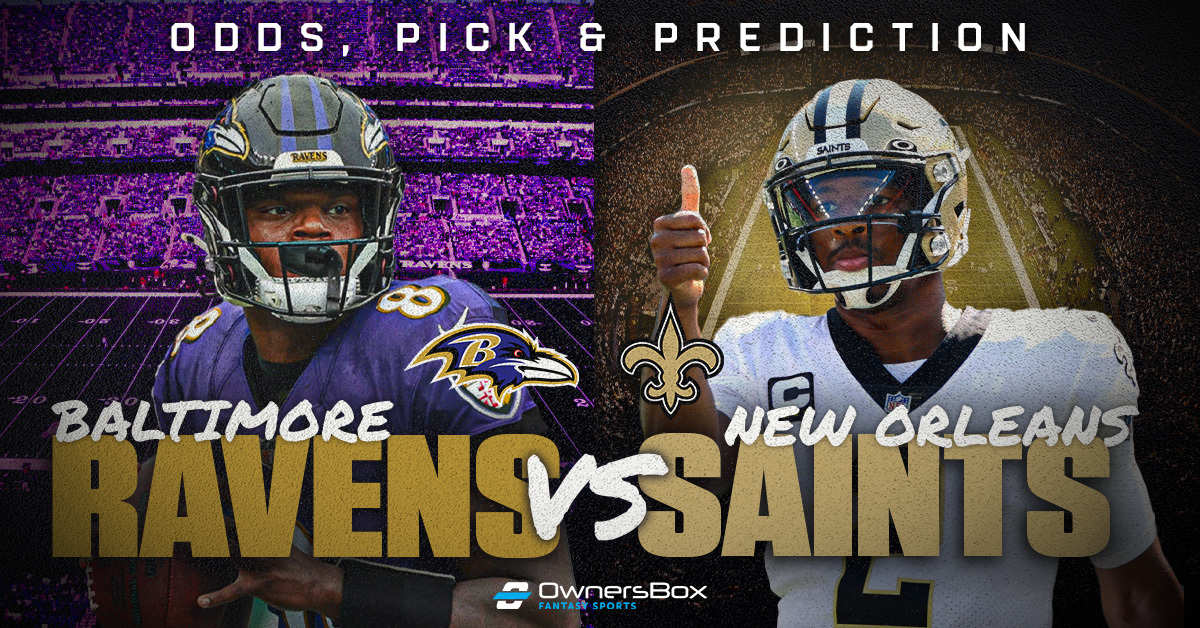 The Baltimore Ravens and New Orleans Saints come into week 9 off of impressive victories. The Ravens won on the road in Tampa Bay, while the Saints shutout the Raiders at home. The odds for this game are exactly where I expected them to be and pairing a 2.5-point spread with a 48 total, we are in for a highly competitive, entertaining matchup. Baltimore holds a 3-4-1 record ATS, while the New Orleans comes in at 3-5, meaning both of these teams are probably playing a little bit under the expectations Vegas has for them as we take a look at the Ravens vs Saints odds.

These teams have a lot to play for as the Ravens are in the mix for the #1 seed in the AFC North while the Saints are still more than alive in a terrible NFC South. The issue with these teams this season has been injuries and as we continue to get deeper into the season, the news gets worse. This week brought announcements of both teams losing a receiver to what is expected to be season-ending injuries. Both Rashod Bateman and Michael Thomas have been ruled out and when handicapping this matchup, I was very intrigued by the receiver vs secondary matchup on both sides.

Louisiana sports betting markets list the Saints as home underdogs in Monday Night Football. New Orleans is 1-2 against the spread as a home underdogs under Dennis Allen in 2022. The point spread actually opened at the key number of 3 at a few Louisiana sportsbooks, at Caesars Sportsbook Louisiana it was even at 3.5 and 4.0.

The Ravens opened as 3.5-point favorites but the spread has since moved to under a field goal. The Ravens are a 5-3 team who have been tied or have had the lead in the fourth quarter in every game this season. Their three losses have seen them squander double-digit leads and if they want to win this game on the road, they will have to finish. Coming off of Thursday Night Football and extended rest going into Monday Night Football will do wonders for a team as banged up as Baltimore.

And guess who leads the NFL in tackles this season too (Smith, 83) pic.twitter.com/xa7MfKsgQI

The Ravens went shopping at the trade deadline which returned Roquan Smith to help bolster this defense. Smith says he is ready to jump right into things and in one of the most underrated acquisitions in recent history, I think he gives this Ravens team a complete new look. They are going to be a lot harder to play against and with a stud like Smith in the middle, other players will be able to step up around him. The Ravens rank 10th in total offense and 24th in total defense, showing you why the front office felt urgency to upgrade on the defensive side of the ball.

The Saints have been mainly underwhelming this season but their 24-0 win over the Raiders a week ago was certainly a bright spot. Alvin Kamara found the end zone three times and the Saints were finally able to run a game plan which hid Andy Dalton and his shortcomings. Although he threw the ball 30 times, 10 of those were targeted to Kamara on short throws and as it turns out, getting the ball into your playmakers hands is a good way to win a football game.

The Saints hold a 3-5 record through eight games and are looking to string together a pair of wins as home underdogs. Andy Dalton is familiar with the Ravens from his time in Cincinatti and held an 8-8 record in their division matchups.

Ravens vs Saints Pick and Prediction

This game is a game in which I am willing to lay a little bit of juice. I think the Ravens will be able to control the clock here and find a way to win in the end. Do I think the 2.5 point spread will be covered? probably. But, I am paying -130 on the moneyline to root for a win in what is expected to be a very close game. A lot of people weigh the pros and cons of paying a little bit extra juice in these situations and although I do usually lean towards taking the spread and saving a few dollars, I think this game has Justin Tucker fourth quarter game-winning field goal written all over it.