Everything You Need to Know for Rams vs 49ers

These two football teams played the most regular season games in NFL history and 2 playoff games just to matchup with each other for the third time this season. Not only is this the third meeting between the Rams and 49ers, it is also going to decide who represents the NFC in the Super Bowl.

The 49ers and Kyle Shanahan have dominated Sean McVay and the Rams in recent years. Shanahan has won their last 6 meetings. It’s something you will surely hear about all week long. The 49ers are looking a lot like the team that made the Super Bowl a few years ago, riding a defense that is making opposing quarterbacks miserable.

The Rams managed to escape what would have been an all time collapse against the Buccaneers on Sunday afternoon. If McVay continued to be as aggressive with his play calling in the second half we’d all be seeing this Rams team in a different light. But getting past Brady and the Bucs was a major step as the Rams bank on this “all-in” strategy to pan out. 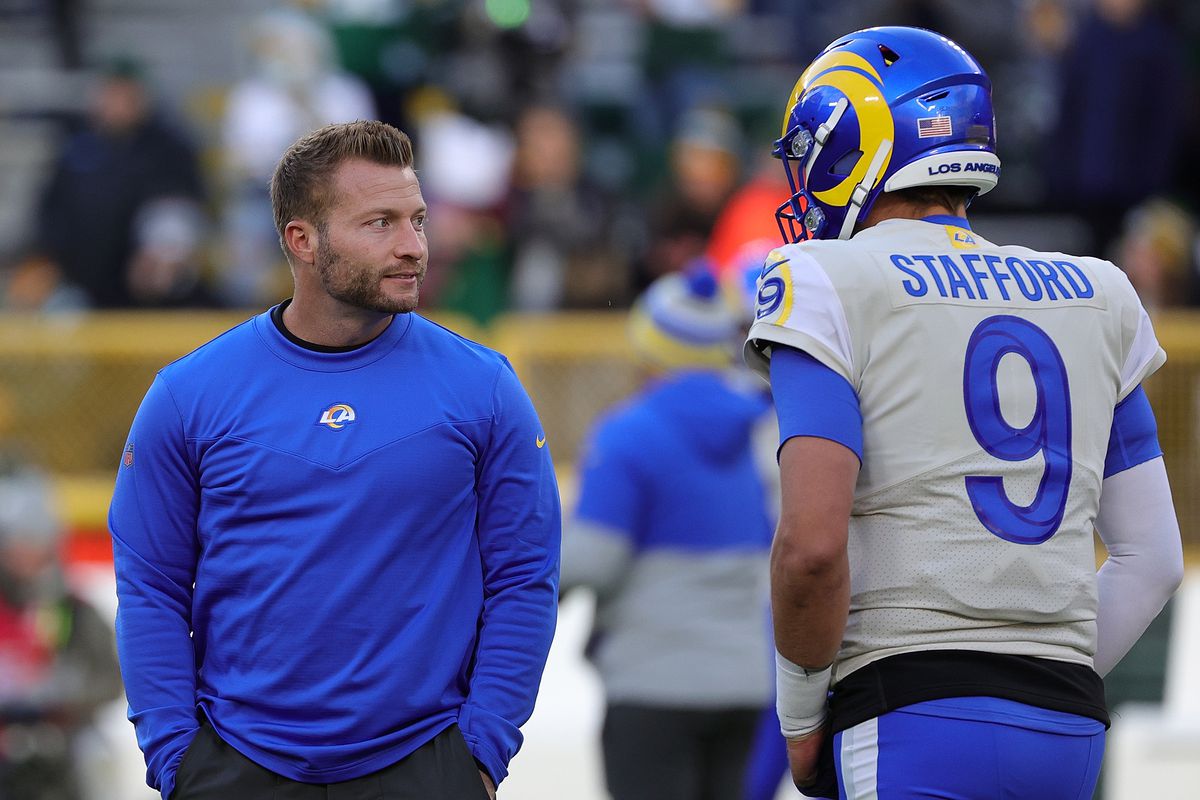 Will McVay Have the Answer?

It’s time for McVay to come up with the answer to defeat his division rival. He has his quarterback in Matthew Stafford and two of the best defensive players in football, there are no excuses. But this 49ers team just has his number and they wouldn’t be seeing them in this game if it weren’t for blowing a 17-3 lead at halftime in week 18. But enough of this narrative, let’s talk about the execution and what to expect with McVay’s offense.

I’ve absolutely loved what McVay has done in 6 of the 8 quarters of playoff football he’s coached in 2022. It’s a breathe of fresh air when you see an offensive play-caller as good as he is be adaptable in his approach. He isn’t arrogant enough to say that his offense is so good that defenses should be adjusting to him, not them to it.

That’s exactly what he did against Arizona, he wore the Cardinals out on the ground, which was their achilles heel all season. When it came to the Bucs, McVay respected their run defense and Stafford torched them through the air in the first half. Stafford threw for 229 yards and 2 touchdowns in the first 30 minutes. 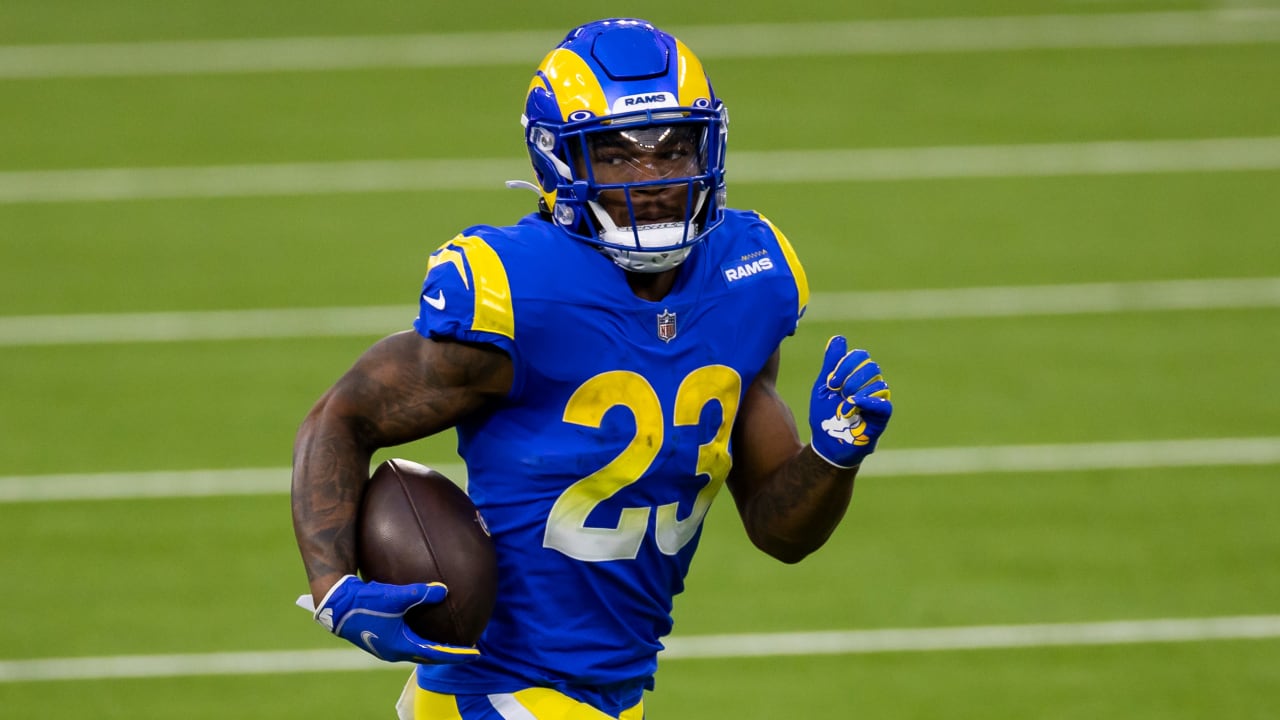 But much like their second half struggles in week 18, the Rams got away from what worked and nearly blew another double digit lead. The issue to me is McVay’s faith in his sophomore running back. In those two games (49ers WK18, Bucs DR) Akers has run for just 91 yards on 45 carries. You cannot sit on a lead when your running back is averaging 2.0 yards per carry and cannot get to the second level. Akers has made some plays as a receiver but perhaps Sony Michel should get back a portion of his role?

The 49ers have deployed a stout run defense all season long, they’re allowing just 4.0 yards per carry and rank 2nd in adjusted line yards per Football Outsiders. So the Rams will need to lean on their passing attack, even if they are able to build another two score lead. Something that Sean McVay just doesn’t seem comfortable with. It could be the turnover issues of Matthew Stafford, who does lead the league in interceptions. The passing offense has really improved with the arrival of Odell Beckham though. I think McVay needs to live or die by the sword of Matthew Stafford as he proved his worth in the Divisional Round against Tampa Bay.

The 49ers are going to rely on the strength of their front-4 and pass rush, as they’ve done in the two previous meetings. During the regular season they blitzed Stafford on just 12.3% of plays but were able to get pressure on 32.1% of his dropbacks. I’d expect to see very little blitzing from the 49ers defense, Stafford has been excellent against it this season. He’s thrown 4 interceptions against San Francisco this season, all of them came without the blitz. 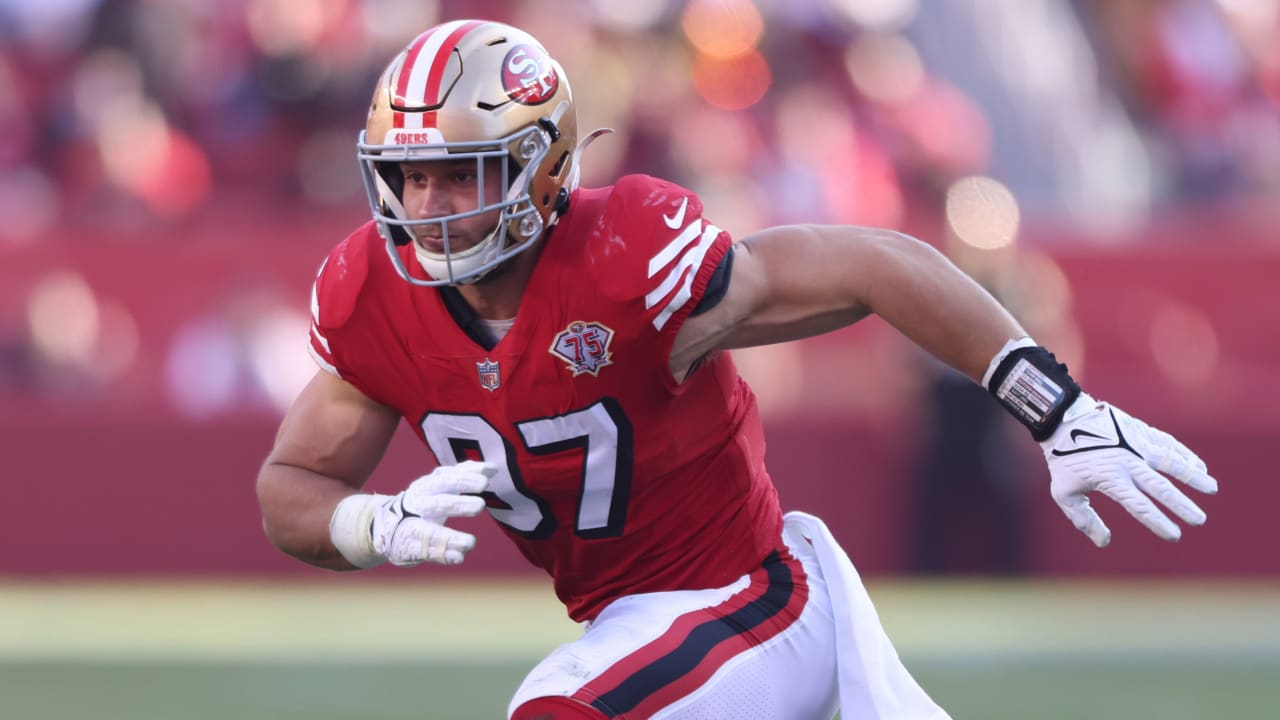 Nick Bosa leads the charge when it comes to the pass rush, Arik Armstead has been great on the interior as well. The strength of the defensive line allows the 49ers to play in a lot of nickel packages, which is why they’ve been so successful against the Rams. McVay plays in 11 personnel (1 RB, 1 TE, 3 WR) on over 80% of plays. He also consistently runs the ball in this set as well, which is something he may need to get away from in order to find success on the ground.

The Rams offense will look to attack slot cornerback K’Waun Williams with the extremely savvy Cooper Kupp all game long. It’s going to take consistent winning at the line of scrimmage for the 49ers if they want to get this offense off the field. I’d expect to see the Rams throwing the ball at or around 65%+ of plays. McVay needs to leave this game in Matthew Stafford’s hands for 60 minutes.

What Can We Expect From Jimmy G?

San Francisco has willed itself to the NFC Championship game without much help from their starting quarterback. I’m not sure I’ve seen a QB play worse in a playoff win then Jimmy Garoppolo. It comes down to his ability to throw the football, the injuries he’s dealing with looked like they’d be their demise. The spirals weren’t tight and I counted 4 balls into the flat this past Saturday that probably should have went the other way for a defensive touchdown.

Will some warm weather in Los Angeles help him out? The 49ers better hope so as they’ll need him playing at the level he was in their previous meetings with the Rams. He’s been given a clean pocket often when playing Raheem Morris’ defense and executed well. Throwing for 498 yards. 3 TDs and 2 INTs in the regular season matchups.

The Rams have had a terrific run defense this season, allowing just 3.9 yards per carry. But when they meet San Francisco it’s a different story. In the two meetings this season the 49ers have totalled 288 rushing yards and 2 rushing touchdowns. They have not been able to contain the Kyle Shanahan’s zone run scheme. 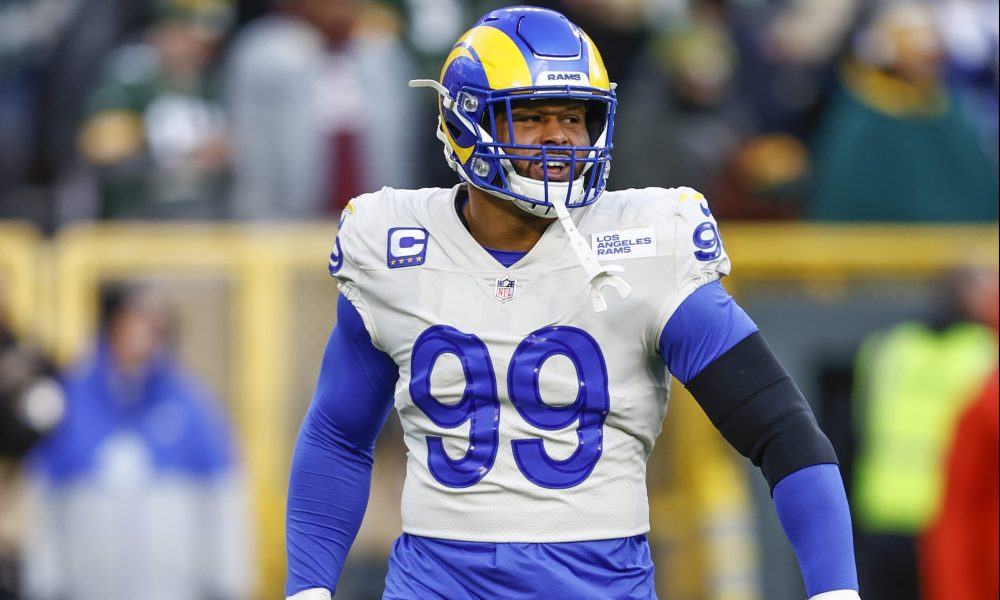 The Rams defense needs to find an answer for the 49ers rushing attack and it starts with putting more men inside the box. Defensive coordinator Raheem Morris has had the luxury of having Aaron Donald at the line scrimmage and thus focusing on a numbers advantage in the secondary. In other words he’ll comfortably sit in a nickel package even if they expect the opponent to run the ball. The Packers were successful by instead playing plenty of their base defense (3-4-4) and it’s something the Rams should replicate.

The worry of course is the tackle breakers that George Kittle and Deebo Samuel are at the second level. It’s the reason why the 49ers average a league best 8.1 yards per pass attempt this season. But against this Shanahan coached offense you need to find the things that you can live with. I don’t think you can live with the 49ers running the ball 45 times and dominating time of possession. You’d much rather force the 49ers into throwing the football and converting on 3rd and long.

The Rams need to focus on the middle of the field and stacking the box. Garoppolo has thrown for 318 yards and 3 touchdowns between the numbers against the Rams this season. All three of his touchdowns have come over the middle in the intermediate areas. If they can slow down the run and force Garoppolo and his banged up arm into throwing to outside the hashmarks it’s a recipe for success. Since 2002, half of the Super Bowl winners finished in the top-3 in net yards per play during the regular season. In the 2021 season, those three teams were the Bills, Bucs and 49ers. San Francisco is the only team left. They’ve had the Rams number the last 3 seasons too, but I just can’t get myself to back them here. I just cannot back a quarterback playing the way Jimmy Garoppolo is.

I think the Rams will be throwing the ball quite a bit and instead of finding ways to run the football McVay will keep the ball in Stafford’s hands. On the other side Los Angeles just can’t figure out the 49ers rushing attack and with so many meetings between these teams I don’t see why that changes in this game. Give me the over.