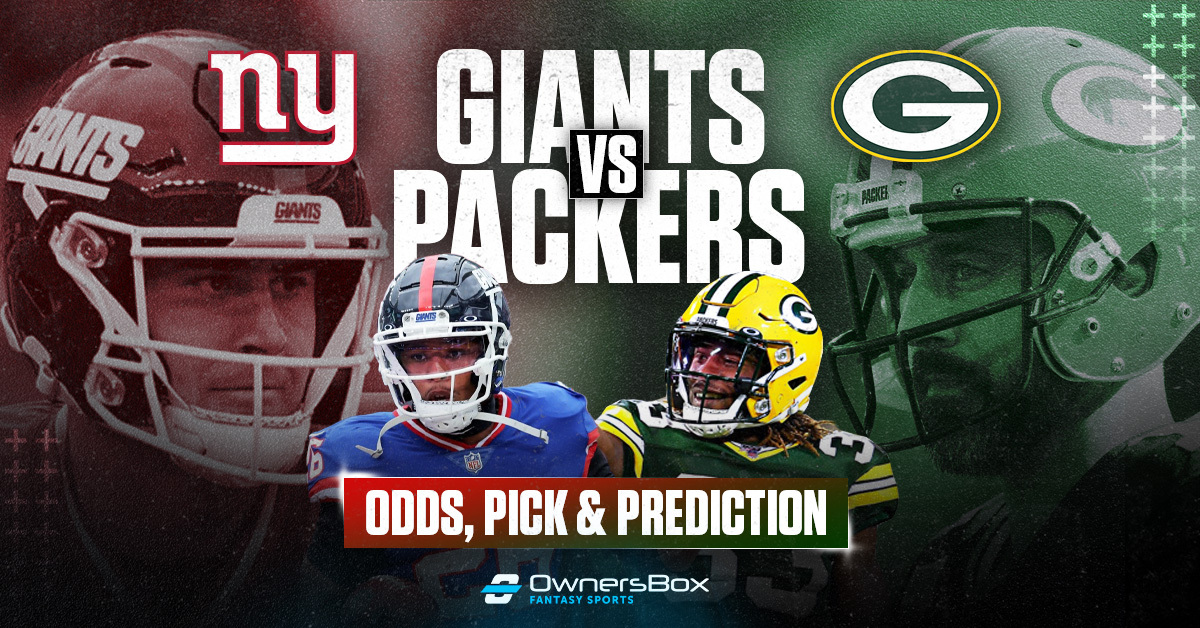 The Giants and Packers are the next two teams heading over the pond to play in London, England at 9:30 AM EST Sunday morning. Waking up to NFL football on a Sunday is a special feeling, and although this matchup has blowout potential, I am not complaining. The “home” Packers are 8-point favorites, while the game carries a total of 41 in the Giants vs Packers odds.

New York sports betting markets list their hometown team as massive underdogs in the Giants vs Packers odds. However, their moneyline price sits at +300.

The Giants are 3-1 through four games and have shown signs of finally being an okay football team. With that being said, I expect them to go 1-3 over their next four.

This Giants team has relied on Saquon Barkley so far this season, and Brian Daboll just might be a legitimate head coach in this league. That’s all fine and great for now, but beating the Bears, Panthers, and Titans is nothing to write home about. They now have to travel to London where Aaron Rodgers is patiently waiting to take advantage of a secondary who has yet to be truly tested.

.@saquon is the rushing yards leader through four weeks! 🙌 pic.twitter.com/zrxBM53FM1

A healthy Saquon is fantastic to watch, and as the season progresses I do think he will continue to impress. The issue I have with this offense is the weapons in their receiving room. This core has been hit with injuries to Sterling Shepard, Kadarius Toney, and Kenny Golladay, and are now facing the best defense they have seen this year.

Quarterback Daniel Jones is also banged up dealing with an ankle injury and just because he is expected to go, that does not mean he won’t be hindered, especially in the run game.

I have been waiting a few weeks to find a spot to fade New York, and I think I found my spot in the Giants vs Packers odds. Daniel Jones has been more than competent to start the season and just when a team starts feeling good about themselves is sometimes the time to fade. Look for the Giants to struggle on both sides of the ball in this matchup in London.

In a weird overtime game against the Patriots where they probably should have lost, the Packers snuck away with a win last Sunday and saved a lot of people’s survivor picks.

This Packers team is still figuring it out offensively, and to be 3-1 and not even remotely close to their final form is very impressive. Rodgers is beginning to show trust in his young pass catchers, and if they continue to blossom, this Packers team will round into something special.

Fourth-round pick Romeo Doubs leads the team in targets, catches, and receiving yards through four weeks, and in my opinion, I think this may just be the beginning for what he can do with Rodgers.

The Giants’ defense will be in for a long day against the Packers here. I expect the Packers to continue to run the ball and in turn, set up Rodgers to take advantage of the play-action game.

Romeo Doubs has seen an increase in his prop numbers at every book, but we still have time to take advantage of his potential over at Caesars Sportsbook in the Giants vs Packers odds.

Aaron Rodgers is against an inferior defense. We have seen it before, and we are definitely going to see it again.

The only hesitation I have with this game is the London factor but even with that, I am backing the Packers here.

The Packers will look to get out to an early lead here and force Daniel Jones to throw rather than just handing the ball to Barkley. Give me the Packers to get up enough points where they will have a comfortable lead and can rely on their defense to close out not only the game but also cover the 8-point spread in the Giants vs Packers odds at Caesars.

As mentioned above, Romeo Doubs is going to be special. His receiving yards prop is sitting at 44.5, and this Packers offense will continue to evolve his workload. I am confident in backing a guy who has yards after catch ability, and Doubs is just that.