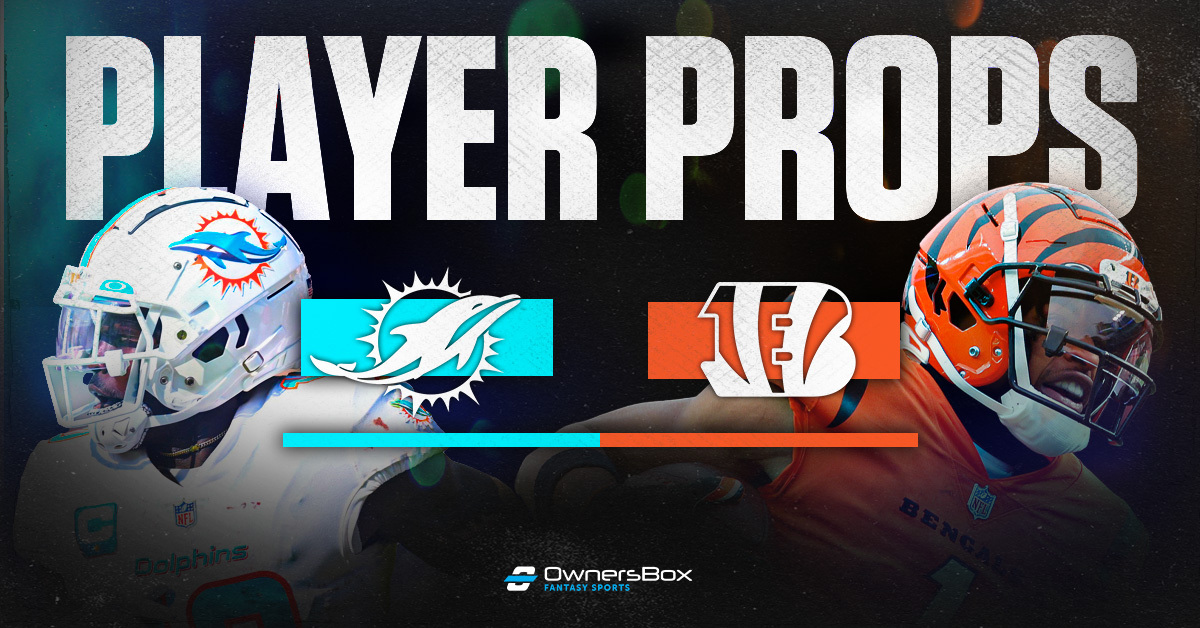 Welcome to NFL Week 4! We are looking to keep the streak rolling, as the NFL player prop record for the blog currently sits at 5-2 entering Thursday night’s tilt in Cincinnati. I will be taking a pretty straightforward, but strategic approach to Thursday Night Football Week 4 for reasons we will discuss in the article, so be sure to read until the end for the three best Dolphins vs Bengals prop plays that I will be riding Thursday night.

Be sure to shop around the industry for the best Bengals vs. Dolphins odds before placing your bets! We’ll be looking at DraftKings, Caesars Sportsbook, and BetMGM for the best NFL Week 4 Thursday Night Football props.

Use the BetMGM bonus code ‘OWNERSBOX’ to get a $1,000 risk-free bet for Dolphins vs Bengals.

This week we have Dolphins vs Bengals on Thursday Night in what the books expect to be a game in which some points are scored. I’m going to break this game down here a bit more extensively than I have in past articles, but I think it’s important to fully explain the logic and reasoning that goes into these selections.

Last week, we saw the Dolphins give up nearly 500 yards of offense in a win over the Bills. Josh Allen and company had little problem moving the ball but repeatedly failed to convert in the red zone. It’s worth noting that through three weeks, Miami is 31st in the NFL in yards per game allowed, allowing a massive 413 yards per game.

With that being said, we will be targeting this weak Miami defense coming off a short week in a game in which they spent 40 minutes on the field against Buffalo.

Burrow is going to absolutely ball in this one as long as he can get enough protection from his line to allow him to deliver the ball to his three top-tier WRs in Chase, Higgins, and Boyd. I expect Miami to move the ball and put up points here, so Burrow should be throwing the ball fairly often in this type of game script.

After watching the Bills vs Dolphins game last week, Miami does have the ability to get to the quarterback. Josh Allen was scrambling all day. This does inherently create some risk for a performance that mirrors Burrow’s Week 2 effort against Dallas, where he had no time all day and was consistently sacked and pressured.

In the end, I think the Bengals continue to right the ship and get to 2-2 with a win here, so I will be on the Joe’s over as my first Dolphins vs Bengals prop off the board.

I am sure for many reading this article, there is still a bitter taste in your mouth after Mixon’s absolutely brutal performance Sunday. He carried the ball 12 times for 24 yards, leaving about as much to be desired as possible considering the matchup with the Jets.

I always like to attack these “flop lag” spots, and Mixon fits the mold perfectly here. He has one of the highest workloads for a RB in the league, in an offense implied to score 26 points at home as a 3.5-point favorite, AND bettors will be down on him after the massive bust last week. The stars align for a great bounce back from Mixon here.

We saw Devin Singletary, by no means known for his receiving prowess, catch nine balls for 78 yards against Miami last week. This was a result of the aforementioned pressure that the Dolphins were able to put on Allen. I can see a similar role for Mixon if Burrow is forced to get the ball out quickly.

After a disappearing act last week, look for Mixon to carry this Bengals offense on the ground, and even through the air if needed. Take every Dolphins vs Bengals prop available for Joe Mixon this Thursday.

Mostert and Chase Edmonds have pretty much split time in the backfield, which is what most of us expected coming into the season. This is a dart throw and should be treated as such with your sizing. I won’t have a full unit on this Dolphins vs Bengals prop and don’t encourage anyone else to either.

We fucked up by drafting him, but this is our chance to fix it.

Edmonds was used as Miami’s clear RB1 in Week 1. Since then, though, Raheem Mostert has been the top dog. Despite scoring two touchdowns in Week 3, Edmonds was out-snapped by

However, this is a spot where Mostert will get opportunities to see the box. It was Chase Edmonds who saw both touchdowns in limited work last week, but the snap share is basically even, and both running backs should have an opportunity to find the pay dirt on Thursday night.

The tweet below (and thread under the original tweet) will go into greater detail with snap shares, and routes ran, etc. Regardless, I will be taking a flyer on a Mostert touchdown at 3-1 in the Dolphins vs Bengals odds.