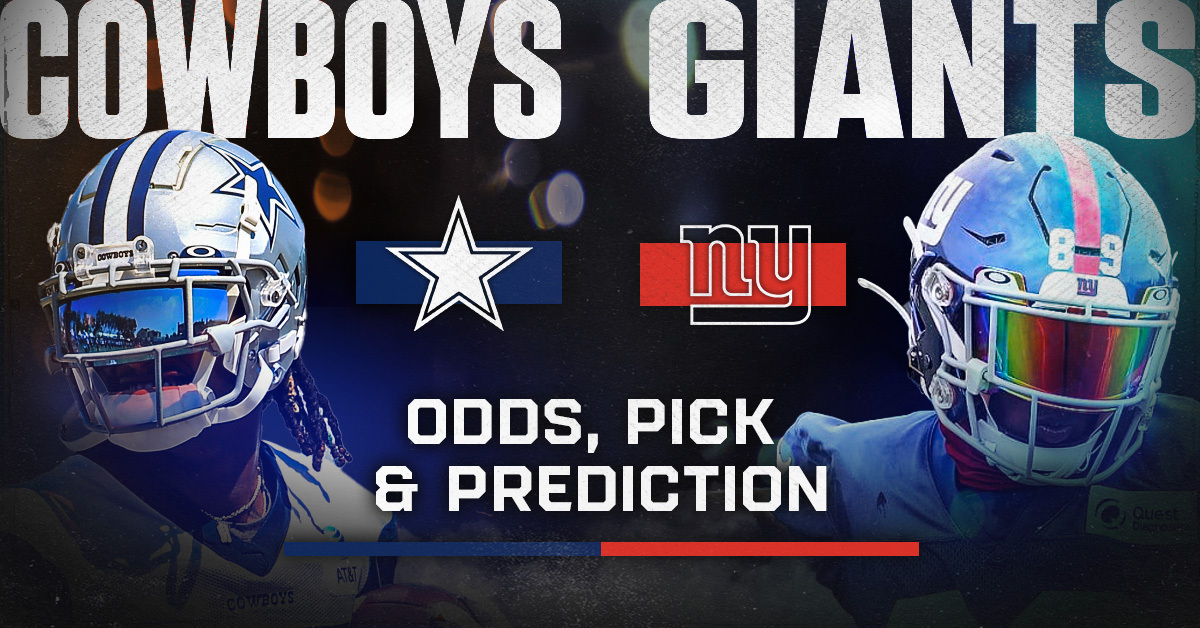 Playing on Monday Night Football is every young football player’s dream. For Week 3, the world is blessed with a marquee matchup between Cooper Rush of the Dallas Cowboys and the Giants’ Danny Dimes Jones. At essentially a pick ’em in the Cowboys vs Giants odds, this is setup to be an absolute battle on the betting playing field.

Kickoff is at 8:15 PM EST on Monday, September 26th, 2022 at MetLife Stadium in East Rutherford, New Jersey as the surprising New York Giants look to keep their undefeated season alive.

Use the Caesars Sportsbook promo code ‘OWNERSBOXFULL’ to get a $1,250 first bet for Cowboys vs Giants.

New York sports betting markets list the home team at -115 on the moneyline in the Cowboys vs Giants.

Dallas couldn’t have looked more flat to start the season in Week 1 against Tampa Bay. Adding insult to injury, pun-intended, they watched their starting quarterback, Dak Prescott, exit the game early with an injured thumb after colliding with outside linebacker, Shaq Barrett.

Fortunately for them, it was a clean break, and they can expect Dak back on the field sooner than initially thought.

The Cowboys have now turned to Cooper Rush and although he may not create the quarterback controversy that owner Jerry Jones was hoping for, they were still able to win a ballgame last week with a 20-17 home victory over the struggling Cincinnati Bengals. Rush didn’t look awful, completing 62% of his passes for 213 yards, a touchdown, and no turnovers. Classic game management out of their second-option and something we should all be able to expect as the season progresses.

2021: Cooper Rush sets up number 19 to win the game for the Dallas Cowboys

2022: Cooper Rush sets up number 19 to win the game for the Dallas Cowboys pic.twitter.com/zleBowuMjs

Through two games, the Cowboys rank 21st in passing offense and only 23rd in rushing offense, per ESPN. Now, the chemistry between Noah Brown and Cooper Rush has been undeniable so far, but they’re going to need Pro Bowler Ezekiel Elliot to wake up and provide some more support.

Averaging 12.5 rush attempts per game, 50 rush yards, and only one reception is simply not enough. His running mate Tony Pollard continues to shine, but for a franchise that continues to have the highest of expectations, they simply need more.

Although their Defense has allowed the sixth least amount of yards per game, they’ve only caused one turnover through two weeks — a number they’d like to see increase against Daniel Jones. Micah Parsons has been a Madden Character so far in his young career and we can expect to hear his name called a whole lot on Monday.

Dallas is 1-1 ATS, so far this season and are walking into their first game away from Jerry’s World. Seeing New York as an underdog in the Cowboys vs Giants odds is something so foreign for sports bettors.

Talk about another quick turnaround. Head Coach Brian Daboll continues to prove why he won the AP Assistant Coach of the Year in 2020, earning his opportunity to lead a ball club of his own. In his first year in Buffalo, he helped their offense tack on 11.7 more points per game from the year prior and his impact on Josh Allen has been very clear to see.

Now is Daniel Jones comparable to Josh Allen? Of course not.

Outside of their build, you’d be better off comparing Grandma’s station wagon to a Ferrari. However, we’ve seen a different Daniel through the first two weeks of the 2022 NFL Season. He’s completed over 70% of his passes and only has one total turnover thus far.

Coach Dabboll seems to have found his comfort zone with Jones and it’s in the shape of Saquon Barkley. Having him return to the field this year has been good for football, good for the NFL, the fans, and definitely good for Giants bettors as they’re 2-0 ATS this so far this year.

In Week 1, Saquon re-introduced himself with a monstrous game in Tennessee — touting the rock 18 times for 164 yards and a touchdown. Last week didn’t fare as well for the young running back against a Carolina defense that had just let Nick Chubb run right through them in Week 1.

So, what are we going to see out of the Giants offensive line? This team goes as Saquon goes, and they’re facing a much tougher test on that side of the ball this week than they did against Carolina.

This line opened with New York as 3.0-point favorites in the Cowboys vs Giants odds and has moved to a pick ’em, with the total staying between 40.5 and 39.5 across most books. We’re seeing the public liking the Cowboys to cover the spread on the road with 56% of the handle on them per VSiN.

Unders have been the theme for Primetime games (7-1 so far), but these games have started much quicker. The first quarter total is set at 7 and we’ve seen this go over at a 4-1-3 rate. I see both teams scoring early on Monday.

I’ve been too impressed with the Giants ability on both sides of the ball. They contained Derrick Henry and Christian McCaffery and impressively have 14 more minutes of possession than their opposition through two weeks. That will be the recipe as they move to 3-0 on the year.