Commanders vs Bears Odds, Preview and Betting Pick for TNF 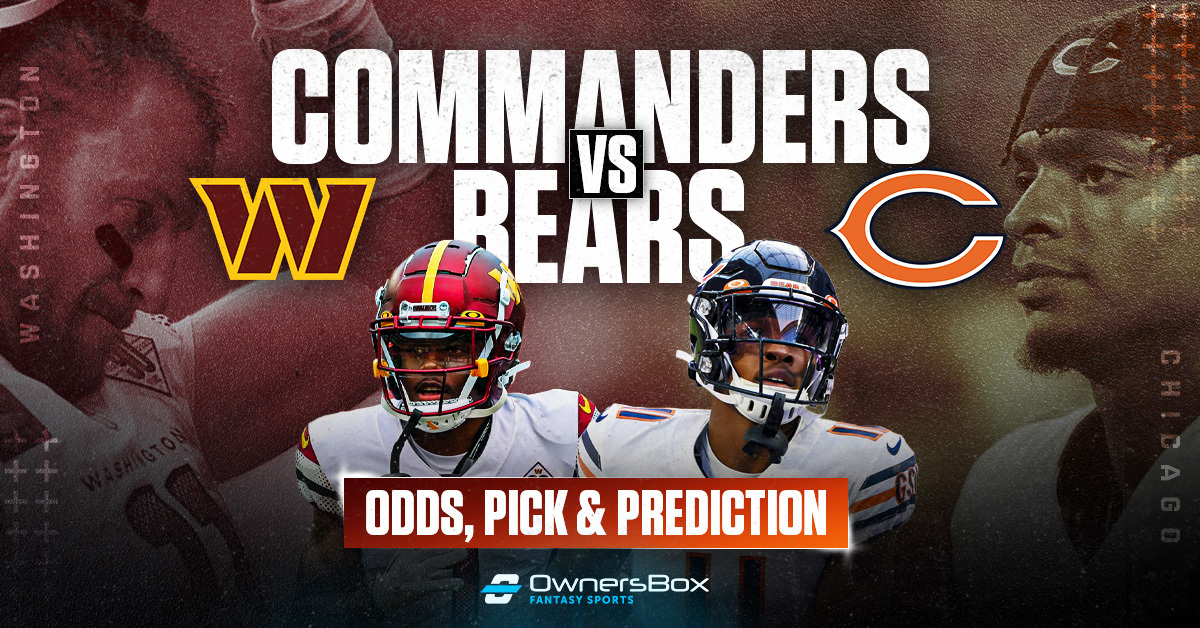 We’re all thinking about how far away we can get from last weeks Thursday Night Football game, the Colts and Broncos may have played one of the worst games of the season. Yes, I would rather have watched the Texans take down the Jaguars 13-6 on Sunday. But as we look at this weeks matchup, the Commanders and Bears, there might not be much hope. If we can take solace in one thing, it’s the fact that Chicago are mere 1-point favorites in the Commanders vs Bears odds. So at least this one may be close.

Ron Rivera may be on the hot seat as the Commanders have rattled off four straight losses since their opening week win over the Jaguars. Meanwhile. the Bears have lost back-to-back games, with the passing offense looking anemic. Let’s break down the Commanders vs Bears odds before getting into our best Thursday Night Football betting pick. We all know that betting this game is the only thing making it watchable.

Illinois sports betting markets list the Bears as favorites for the second time this season, despite their struggles in 2021 the Bears were a perfect 3-0 against the spread as home favorites last season. Meanwhile, the Commanders are a pedestrian 2-5-1 as road underdogs since the start of 2021.

Whatever you decide to bet on in this game be sure to shop around and find the best Illinois sports betting promo codes to place your bets. PointsBet is offering one of the best prices for Commanders moneyline at +100 at the time of writing.

The Bears have survived five weeks of the NFL season with a 2-3 record due in part to their offensive philosophy. They are running the least amount of plays per game and rank 26th in seconds per play. Their methodical pace limits the amount of possessions in the game and in turn keeps games tight. The problem is, this offense is anything but unpredictable, running the ball on 60.2% of plays.

We saw the Bears struggle to move the ball on the ground against the Vikings last week, but I wouldn’t expect them to change their approach. Both David Montgomery and Khalil Herbert have combined to force the 3rd highest broken/missed tackle rate in the league. There is an opportunity to move the ball through the air against a Commanders defense that allows 7.2 yards per attempt.

Chicago’s defensive approach is very simple, their 4-3-4 alignment is run on 39% of plays, which is the 2nd highest in the NFL. They also haven’t moved to that traditional 2-high safety look either, defending out of a one-high shell on 58% of plays (4th). Results haven’t been great from it, allowing 5.2 opponent yards per play. That can be the result of a lackluster pass rush.

Commanders Desperately in Need of a Win

I’ll say it, if the Commanders don’t walk out of Chicago with a win on Thursday their season is over. They can’t start focusing on the draft and the potential of replacing Carson Wentz with CJ Stroud. That might not sound all that bad to Washington fans as Wentz is on pace to throw 21 interceptions in 2022.

The Commanders have a ton of weapons at Wentz’s disposal, with McLaurin, Samuel, Dotson and Thomas as pass catchers as well as Gibson and Robinson at running back. The addition of Brian Robinson to the RB room could result in a more balanced attack as Gibson has struggled to just 3.2 yards per carry on the season.

"Why are the other NFC East teams ahead of you?"

The strength of the Commanders defense is in their front 4, led by Jonathan Allen, Daron Payne and Montez Sweat. Their 38.8% pressure is the 2nd highest in the league, while also ranking 6th in defensive rush DVOA. The secondary is a problem though, allowing 7.9 yards per attempt, which is the 5th worst in the league.

One key note that I think a lot of sports bettors may look over in this matchup is the fact that the Commanders are going from the Titans to the Bears in back-to-back weeks. Going against these two run heavy offenses back-to-back makes for better preparation the following week. The Bears can’t take advantage of the Commanders biggest defensive weakness and will struggle to win at the line of scrimmage.

I’m going to two plays in this game, one being the Commanders on the moneyline and the other being a prop bet. I’m looking at David Montgomery over 14.5 receiving yards. Washington plays in a two high shell at the 6th highest rate in the league and have at least 5 DB’s on the field for over 85% of plays. This is key for Montgomery in an offense that already has a 16% screen pass rate, which is 2nd highest in the NFL. Look for the Bears running back to be available for short passes near the line of scrimmage.