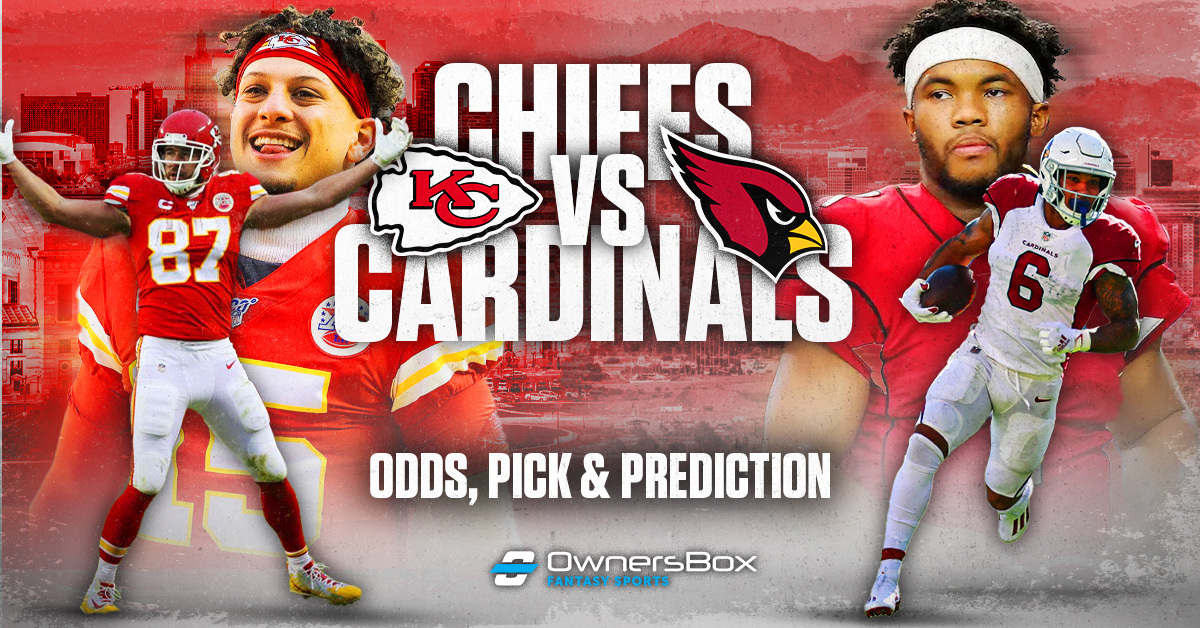 As NFL fans, we are being spoiled once again, with another Week 1 offensive showdown between two of the biggest stars in the NFL. Kyler Murray, and the Arizona Cardinals host Patrick Mahomes, and the Kansas City Chiefs on Sunday, September 11th, 2022, at 4:25 PM EST. Kansas City are 6.0-point favorites in the Chiefs vs Cardinals odds.

Both teams fell short of greatness last year but look to start their season off on the right foot by competing against some of the highest-powered offenses in the league. Let’s take a look at the Chiefs vs Cardinals odds at BetMGM as we break down one of our many best NFL picks this weekend.

Use BetMGM bonus code ‘OWNERSBOX’ to get a $1,000 risk-free bet for Chiefs vs Cardinals.

Kansas online sports betting launched on September 1st as bettors get right into NFL betting. With so many apps available, be sure to shop around for the best line.

The Kansas City Chiefs came up short of the Super Bowl, even with their highly efficient offense. The Chiefs were once again ranked number one in almost every offensive category you can think of. First in points scored per drive, first in yards per drive, and first in plays per drive, but one category often overlooked revolves around their defense.

The @Chiefs have the longest active winning streak (7) on @NFL Kickoff Weekend & can become the 6th team in the Super Bowl era to win eight consecutive season-opening games. pic.twitter.com/vmJt22LxMK

The Chiefs’ defense has regressed quite a bit over the past three seasons, which caused huge issues for the team as a whole. Their defense ranked 24th in total defensive efficiency with most of this caused by their nonexistent secondary. The Chiefs were the most successful team in hitting the total in 2021, ending the year 12-8 vs the over.

The Chiefs lost some key guys in Tyrann Mathieu and Tyreek Hill, who were crucial contributors on their respective sides of the ball. Come Sunday, we will see how the Chief’s game plan has changed after losing one of the most explosive players in all of football, as well as how their defense can be better equipped to handle the high-powered offenses that reside on the West Coast.

The Chiefs hold the longest active Week 1 winning streak in the NFL, with seven games consecutive wins over the last seven seasons. A trend that many sharps might be looking to fade with the loss of Hill.

As the Arizona Cardinals’ 2021 season came to a close, all thoughts revolved around what could have been. Started the season 7-0 and fell apart after the Kyler Murray injury during the Week 8 loss to the Packers. All of the statistics point to a much better outcome for the season if Murray was able to avoid injury.

Before his injury, Murray was destined to be one of the most valuable quarterbacks in the NFL and an early pick for MVP. Murray fell off quite drastically when he returned from injury, which could be attributed to him not being fully healthy or teams better preparing to lock down Murray, but it is hard to say until we see the offense perform these next few weeks.

As we know, the Cardinals can put up points on offense, but can their defense hold the high-powered offense of the Chiefs? In 2021, the Cardinals were 10-8 against the spread, ranking them in the top 10 in terms of covering spreads.

the 10 most accurate QBs last year

where they excelled & what set them apart, for @NFLonFOX:https://t.co/UJyizKrfre

With the 2022 season kicking off here this weekend, football fans around the country will tune in to see if Murray is back to his old self, or if his first seven games might have been an anomaly.

Will the Cardinals be able to cover the spread of +6 with the help of the newly acquired wide receiver in Marquise “Hollywood” Brown? We will see if he can fill the shoes of Deandre Hopkins while he serves his 6-game suspension.

There are quite a few Chiefs vs Cardinals betting trends that stick out when deciding what the right betting picks are for this game:

With Kyler Murray having a long offseason to heal and prepare for this game, it is hard not to imagine that the Cardinals put up points against a Chiefs Defense that lost key veterans in Melvin Ingram, Tyrann Mathieu, and Charvarius Ward.

As for the Cardinals, they have one of the worst-ranked secondaries in the league, which Mahomes should be able to pick apart with the help of one of the best offensive units. I expect a high-scoring affair but am worried about the Cardinals failing to cover the spread of six points late in the game. With the spread moving from 3 to 6 points since opening, I am staying away.