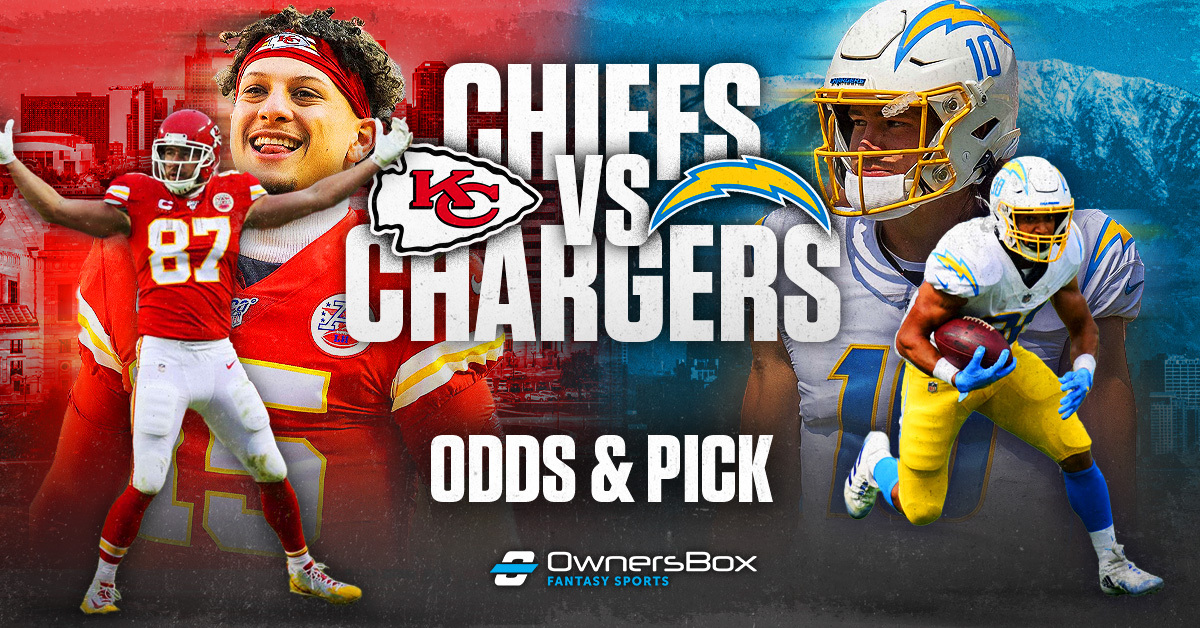 The AFC West rivalries get going early and often this NFL season. After taking down the Raiders, the Los Angeles Chargers head to Arrowhead Stadium to take on the Kansas City Chiefs for Thursday Night Football. The hometown team are 4.0-point favorites in the Chargers vs Chiefs odds at Caesars Sportsbook. Will offenses explode yet again in Herbert vs Mahomes?

Use the Caesars Sportsbook promo code ‘OWNERSBOXFULL’ and get a first bet up to $1,250, plus bonus reward credits!

Despite Keenan Allen going down with a hamstring injury, it was a near-perfect game for the Los Angeles Chargers offense. The Chargers finished with the fifth-best PFF passing grade in Week 1 at 79.5, which was higher than the Chiefs at 73.8.

It was a Justin Herbert masterclass on Sunday. Even the odd time the Raiders blitzed him, he went 4-for-4 for 44 yards and a touchdown. Herbert looks prime for this AFC West matchup, and he returns to a stadium where he’s had a ton of success.

In two road games at Arrowhead Stadium, Justin Herbert is 2-0 throwing for 583 yards, five touchdowns, and ZERO interceptions. To be honest, I also think this Chiefs secondary looked better against Arizona than they actually are. Apart from Marquise Brown, who I still wouldn’t consider elite, the Chiefs had to cover A.J. Green and Greg Dortch.

L’Jarius Sneed is the top corner in KC, posting a 90.2 coverage grade in Week 1. However, one interesting tidbit is that he exclusively lined up in the slot (42/57 snaps). Josh Palmer and DeAndre Carter line up in the slot, while Mike Williams lined up outside 84% of the time in Week 1. A look at Williams’ receiving yards prop wouldn’t be a bad idea in the Chargers vs Chiefs odds.

Patrick Mahomes was near flawless in Week 1. When the Cardinals decided not to blitz Mahomes, he completed 14-of-16 passes for 217 yards. This doesn’t bode well for a Chargers team that blitzed Derek Carr just 24% of the time in Week 1.

If JC Jackson can’t suit up, this just adds more fuel to Pat’s fire. Especially considering the Chargers were one of the worst tackling teams in the NFL last season, and last week posted the fifth worst tackling grade against the Raiders.

It’s also hard to ignore Patrick Mahomes’ recent track record in September. This dude is averaging 337.0 yards and 3.5 touchdowns in his last five ball games in September. Over that same stretch, the Chiefs are scoring 34 points per game.

The Chargers vs Chiefs betting trends favor the road team and the over. The road team is 16-5-1 ATS in their last 22 matchups, while the over has hit in three out of their last four games at Arrowhead.

With a short week for both teams, I think tackling will be at an all-time low. With how both offenses played in Week 1, I think this game will go over 54.5 at -110 in the Chargers vs Chiefs odds.

Users who have yet to sign-up can claim a $200 TD bonus at BetMGM Kansas for this Thursday Night matchup!